Solving an intersection, the Dutch way | Where cars, bikes and pedestrians meet

How can urban design solve the complex situation that takes place in street junctions where bikes, pedestrians and motorists have to cross and turn in different directions? This interesting video shows one of the typical Dutch solutions to this problem.

Could this be implemented everywhere? While other places are going for mixed use of the street (like Spanish ciclocalles) or even more radical solutions like shared space or even ‘naked streets’ without any signs or lights, cities in the Netherlands are known for making extensive use of segregated bike lanes, and that is the scenario where this kind of solution makes sense. There are also other types of intersections, like the roundabouts, which can solve the same problem in a different way.

It’s worth noting how helpful the video format  is for explaining this kind of dynamic issues in the city. I also recommend reading the discussions under the posts linked below; you will find interesting opinions and alternatives.

Marielyst is a small town in the south of Denmark well known for being one of the most popular holiday locations on the Baltic Sea. Since the beginning of XX century its 20 km of white sand beaches attracted an increasing number of seasonal tourists, up to host nowadays 6000 summer houses in its area. The spatial configuration of Marielyst appears chaotic and it’s lacking of a recognisable identity; the main element of the urban structure is the principal street, a traffic vein that allows people to reach the heart of the small town, and from which secondary narrow streets start connecting every single wooden house. The subject of Marielyst competition was finding and providing a spatial organization to this place in order to structure an urban articulation among its parts. Moreover, an important feature to be considered in this site’s revitalization was the “beachy” atmosphere of Marielyst, its main character.

As usual, we worked with a multidisciplinary and international team, with the Danish landscape Office Kristine Jensen, after being chosen among 4 other finalists. 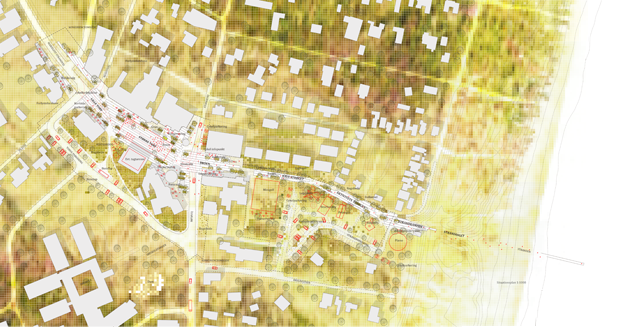 Our proposition started from the identification of the land’s shape, which changed its configuration many times until the present. In the past, the island of Falster -where Marielyst is located- was composed by three smaller islands and was crossed by water; the area had been also flooded and remained swampy for many years, until the late 1800, when it was drained. Inspired by this ancient situation, we conceived the idea of   “Delta“, a sinuous and porous path that connects the dynamic activities of urban space with the relaxed atmosphere of a beach context. 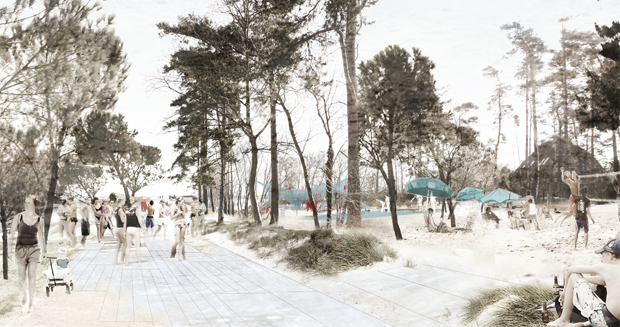 The landscape project focuses on the valorization of the great quality of the natural elements that characterize the site -pines, sea, sand dunes, dike, grass- making them stand out very clearly. The concept of  “Delta” appears with the intention of spreading many accesses to these natural landmarks, connecting them through physical and conceptual paths. The Delta structure allows to pull the beach ambience in the urban space, both melted in a fluid unity; the achievement of this atmosphere is possible by choosing very soft and discreet materials to create paths and furniture elements, by substituting the current asphalt with tracks, marks and signs that simplify integration between the two ‘souls’ of the place. 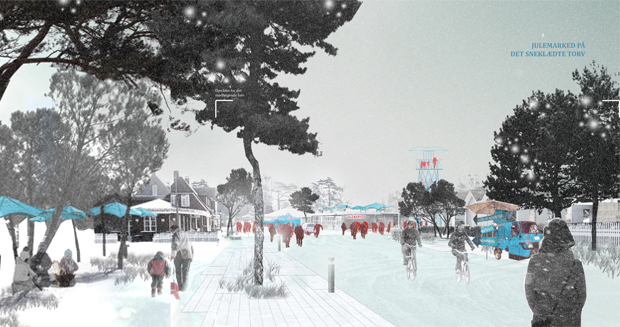 We elaborated one of the main aspects of Marielyst STRAND proposition, the activity plan. “Let it be fun!” is the motto we’ve chosen to summarize our idea to regenerate this area, being certain that the requalification of an urban space could not disregard the involvement of people in making the place alive. 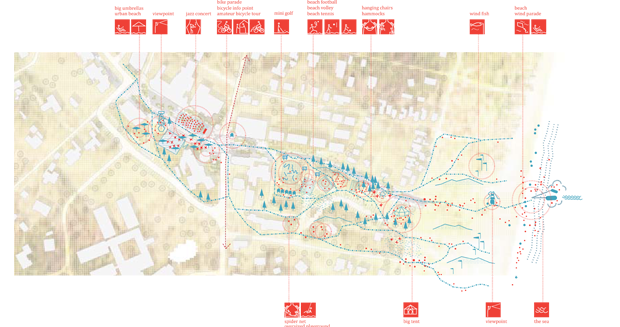 The activity plan during daytime 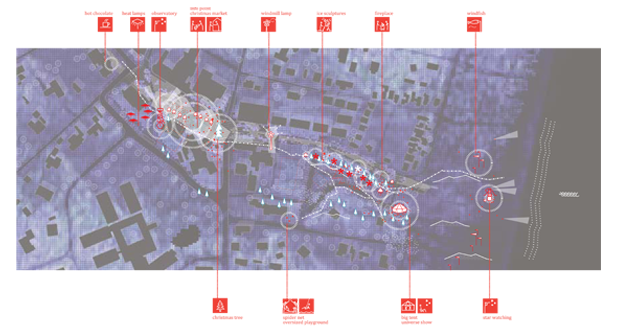 Activity plan for the night

We’ve developed a series of entertaining and bizarre urban objects and we have settled them in the Marielyst area in order to provide several activities aimed to reinvigorate the site during summer as well as winter time. We have tried to get inspired by the surrounding environment to elaborate ideas that allow people to appreciate the visible and the invisible natural local elements. 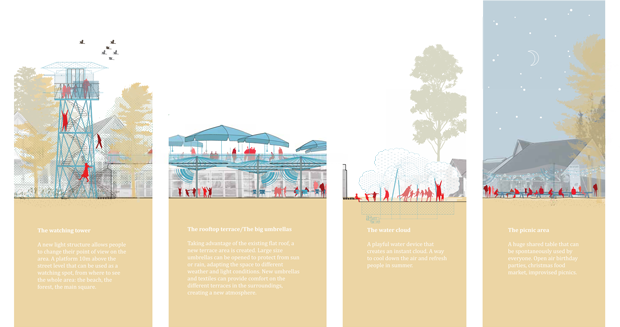 Our proposition for Marielyst urban contest mainly consisted in designing urban objects strictly connected with natural elements that characterize the site, like rich vegetation, long beaches, fresh water and strong wind. The objective of our urban design strategy for Marielyst was to transform this ordinary beach on the Danish coast in a unique and very attractive site that could easily become a reference point for people who want to spend funny holidays in sustainable way. 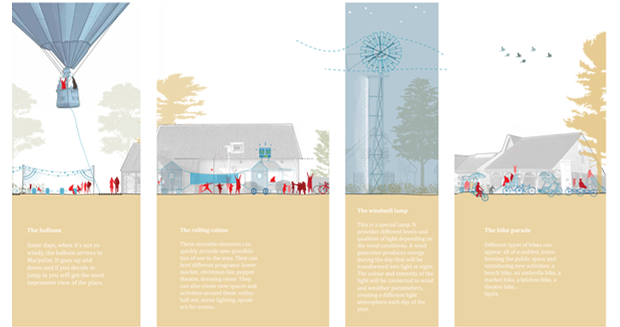 The catalogue includes elements to enjoy the view of landscape from above (the watching tower, the balloon in the sky); elements integrated in the vegetation that allow to take advantage of its amenity in an unconventional way (the hammocks, the spider net, the hanging chairs, the fireplace); objects that transform the beach in a big playground (the playful tower, the oversized playground); objects that use wind to catch its power and transform it into energy (the windmill lamp) or just exploit its strength to create ephemeral landmarks (the wind fish, the wind parade). 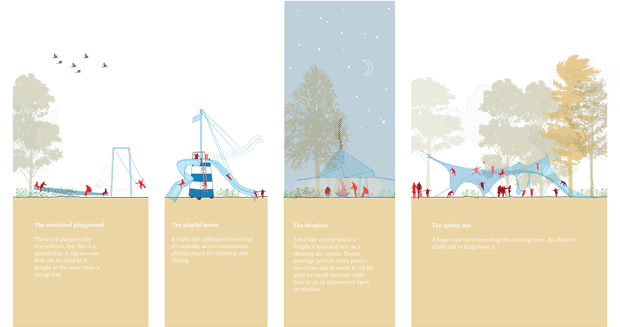 Other elements are mobile and contribute to constantly change the configuration of the place, like the rolling cabins -temporary supports for sport activities or refreshment bars-, or the vehicles on wheels, a kind of elaborated bikes that could be used to move along the city and create temporary stages, movable slides, or on the road benches. Moreover a big attention is given to the socializing areas, as the rooftop terrace of an existing building along the main street, the picnic area or the water cloud, a playful object very useful to refresh atmosphere during sunny days of Baltic summer. 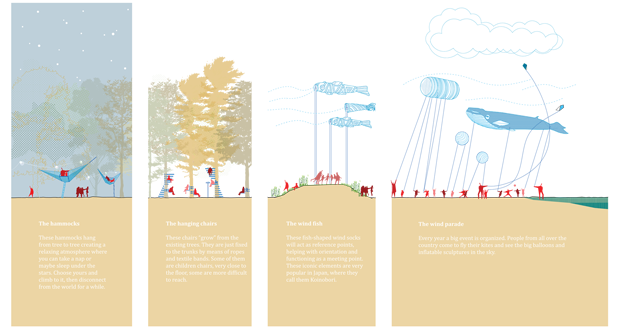 On November 15th-17th leading architects, artists, scholars, and industry from all over the Globe will meet up in Aarhus, Denmark to shape the media architecture of the future, and to discuss how media architecture is about to change cities.
What happens when heat sensitive concrete ‘freezes’ the shadows of passers-by, or when a façade turns into a screen by means of thousands of tiny LED lights? What happens to architecture, people, and cities, when buildings turn into a type of digital media and allows citizens to communicate with each other in completely new ways?

Questions like these are increasingly relevant, as media architecture gains ground in cities all over the world. And they will be top of the agenda when media architecture experts meet up in Aarhus in November. Among the speakers will be media artists Ben Rubin, architect and designer Jason Bruges, Bjarke Ingels Group, Gehl Architects, professor of architecture Antonio Saggio, professor of media archaeology Erkki Huhtamo – and many more. 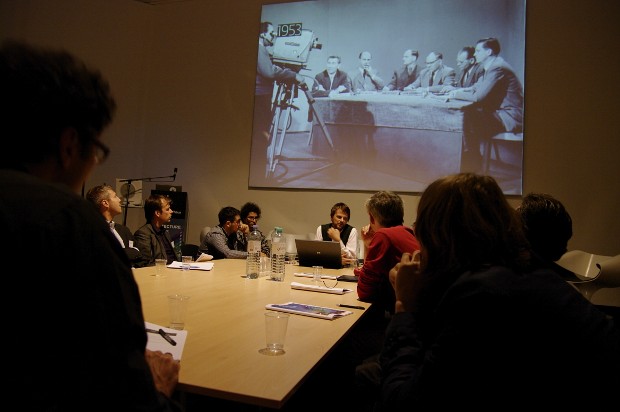 You can still register until 8 November 2012. Just a couple of days left!

We are very pleased to announce that Ecosistema Urbano has been pre-qualified to participate in the competition “Klimatilpasning i Kokkedal” (Climate Change Adaptation in Kokkedal, 30km North of Copenhagen, Denmark). We participate together with Spectrum Arkitekter (DK) and Tyréns (SE) and with an expert panel consisting of: Morten Elle (U.S.), Territorial Studio (FR), Street Movement (DK), Soren Hansen and Steffen Aarfing (DK).

This competition is a collaboration between Realdania Fredensborg Municipality, Realdania, Local and Construction Fund and the public housing companies in Kokkedal.  The challenge is to explore new possibilities for local management of stormwater and flooding and how to combine it with recreational areas ​​and new active sites, new places for citizens to meet.

STUDIECYKEL.DK | a social economic undertaker company to help students in Denmark and Africa 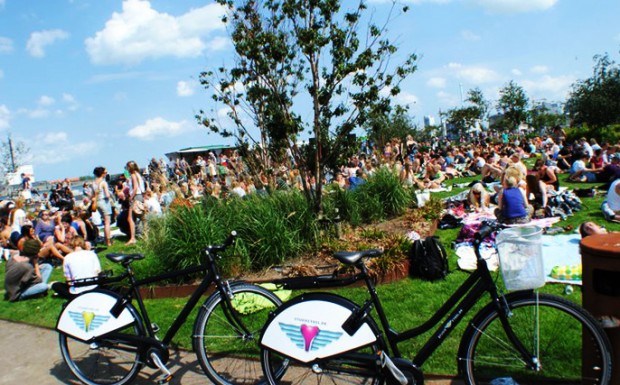 As I am a student myself I thought it is important to not just talk about architecture and sustainability but also students, society in general and how we can make our world a better place and help others. See how small actions can do big difference to the world.

I will be going back to Denmark in august and it happens that I am in the situation of needing a bike. My old bike did not survive the last Danish winter and believe me when I tell you, that a student living in Copenhagen needs a bike to get around the city, to go the fast and easy way from home to the university and in my case it only takes 30 minutes by bike and not the 60 minutes by bus to get through the city… END_OF_DOCUMENT_TOKEN_TO_BE_REPLACED 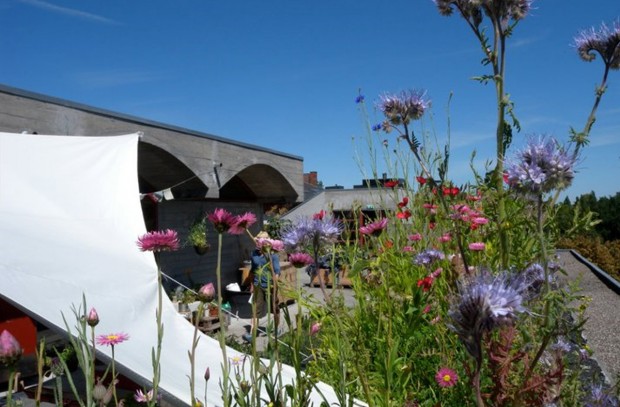 Urban agriculture, or agriculture in the city, is an ‘umbrella term’ that covers activities related to production of food in or on the outskirts of cities. A definition used by UN, UN-Habitat, FAO and other important international research institutions explains it as following: END_OF_DOCUMENT_TOKEN_TO_BE_REPLACED 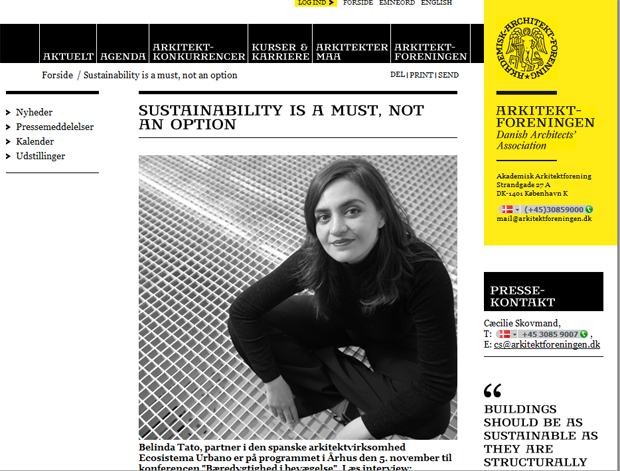 ecosistema urbano will be present at the conference  Sustainability in Motion, taking place in Aarhus next November 5th hosted by the Danish Architects’ Association.  Other speakers will be Lia Ghilardi from Noema Research and Planning (England) and Patricia Patkau from Patkau Architects (Canada). Related to the event they have interviewed us. The interview is available in their webpage.

More info on the workshop and lecture here 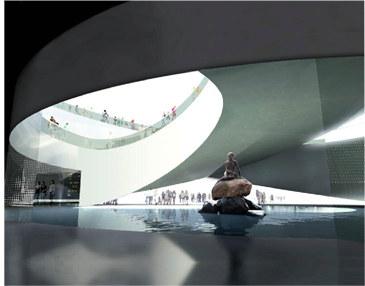 BIG – Bjarke Ingels Group won the competition of designing and creating the danish pavillion for the Expo Shanghai 2010. END_OF_DOCUMENT_TOKEN_TO_BE_REPLACED 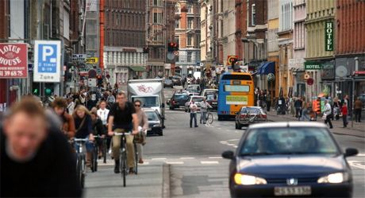 The 1st of October – it happened! What many citizens of Copenhagen have been looking forward to. The day when they shut down one of the most busy streets for cars, Norrebrogade, Copenhagen N. The street is one of the main thoroughfares of the capital – and it will be permanently closed for three months. END_OF_DOCUMENT_TOKEN_TO_BE_REPLACED