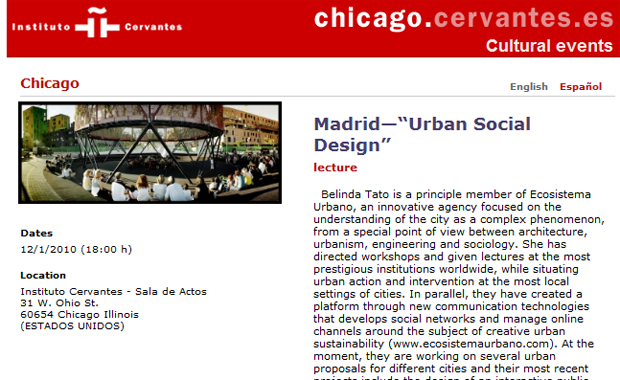 Today December 1st, Belinda Tato (@belindatato) will be lecturing at Instituto Cervantes of Chicago, presenting ecosistema urbano’s latest works in the context of Madrid’s recent urban transformation. The lecture is within a series that showcases the most recent urban transformation of Spanish cities: Bilbao, Barcelona and Madrid. Other participants have been Ibon Areso, and Eduard Bru.

City life and the brain

BOSTON, Mass. (November 9, 2010)—For the first time in history, more people live in cities than in rural areas. According to the United Nations, that urban head count tallies up to more than half of the world’s 6.7 billion people. While city life may offer many benefits—ready access to social and cultural events, more employment opportunities, and the promise of higher living standards, as examples—research does show that city life can have drawbacks. For one thing, it’s hard on the brain.

Scientists who have begun to look at how the city affects our brains have uncovered some surprising findings, including evidence that city life can impair basic mental processes, such as memory and attention. A study conducted by University of Michigan researchers in 2008 found that simply spending a few minutes on a busy city street can affect the brain’s ability to focus and to help us manage self-control. END_OF_DOCUMENT_TOKEN_TO_BE_REPLACED 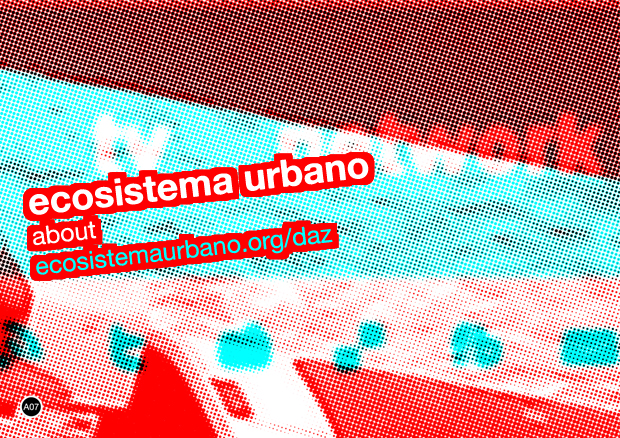 ecosistema urbano is an innovative agency focused on the understanding of the city as a complex phenomenon, from a special point of view between architecture, urbanism, engineering and sociology. The team’s field of interest is defined by something they call ‘creative urban sustainability’, from where to react to the present situation of cities through innovation, creativity and particularly action.

ecosistema urbano was founded in 2000 in Madrid and it is formed by a group of creative professionals in architecture and connected disciplines. END_OF_DOCUMENT_TOKEN_TO_BE_REPLACED 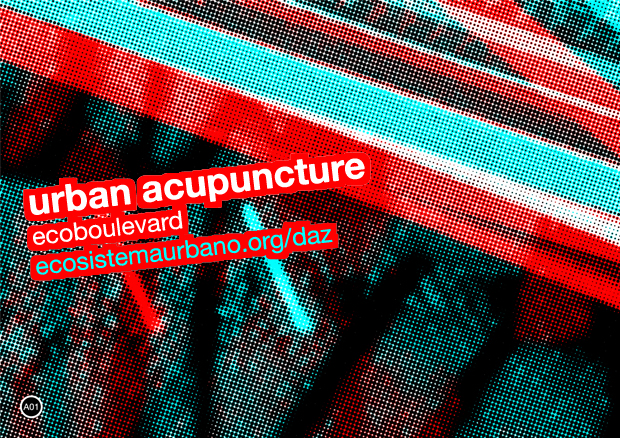 The whole proposal for the eco-boulevard in Vallecas can be defined as an urban recycling operation consisting of the following actions: insertion of an air tree-social dynamizer, over an existing urbanization area, densification of existing alignment trees and reduction and asymmetric arrangement of wheeled traffic circulation. Superficial interventions reconfiguring the existing urbanization (perforations, fillings, paint, etc.) that defaces the executed development. END_OF_DOCUMENT_TOKEN_TO_BE_REPLACED 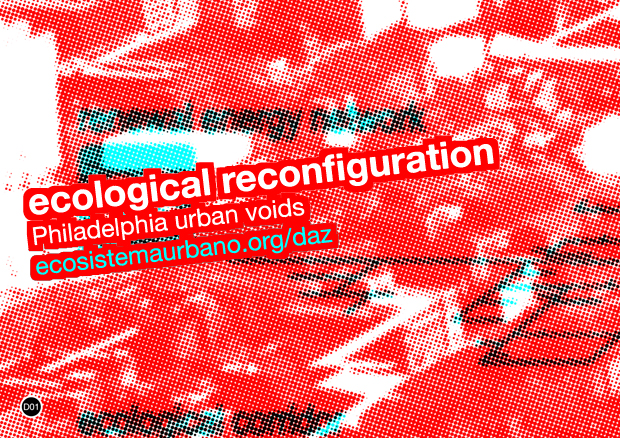 Ecosistema Urbano believes that the revitalization of urban life is not obtained merely by architecture alone, but by focusing on solutions which encompass all aspects of the city system.  Regenerating the networks of social, environmental, and physical elements plants the seed for flourishing, liveable urban communities.  The ecological reconfiguration of Philadelphia uses the city’s strong history of citizen participation to develop a sustainable and economically-viable landscape.

The new Philadelphia will be built over itself by its citizens. Our proposal intends to generate the strategical mechanisms as a starting point for the self reparation of the urban tissue. END_OF_DOCUMENT_TOKEN_TO_BE_REPLACED

city as a playground | plaza ecopolis 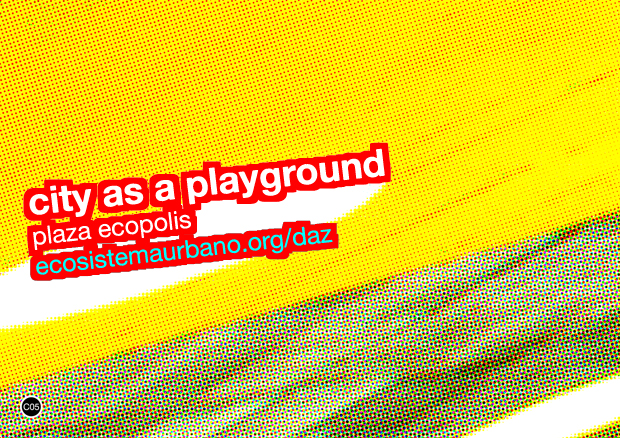 Is it an utopia turning the city into a field of experimentation and play? Is it possible to integrate the different areas of the public space by avoiding fragmentation affecting contemporary cities?

From our point of view the contemporary city should be rethought as a transformation of reality around us rather than a new reality starting from scratch. We understand that this transformation should operate mainly from the public space, the place of the collective expression of social and cultural diversity. Public space should be reconquered  by those who make a freer use of it, those not responding to specific patterns and rules: children. Just through the point of view of a child we will be able to rediscover the city and transform it structurally and not in a merely cosmetic way. END_OF_DOCUMENT_TOKEN_TO_BE_REPLACED 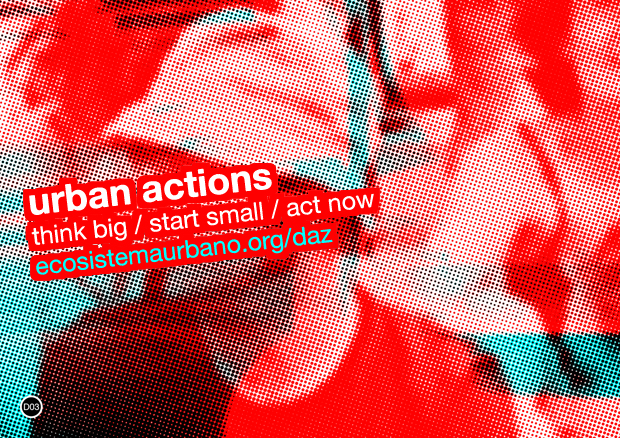 In contrast to traditional problem-solving methods for reactivating degraded public spaces, we believe another form of intervention is possible – one without spending vast amounts of money, time, and energy.  We focus on low-cost actions capable of generating responses from residents, in effect  obtaining a system of self-produced revitalization where the citizen plays an active role in the creation of public space. END_OF_DOCUMENT_TOKEN_TO_BE_REPLACED

physical + digital | what if cities…? 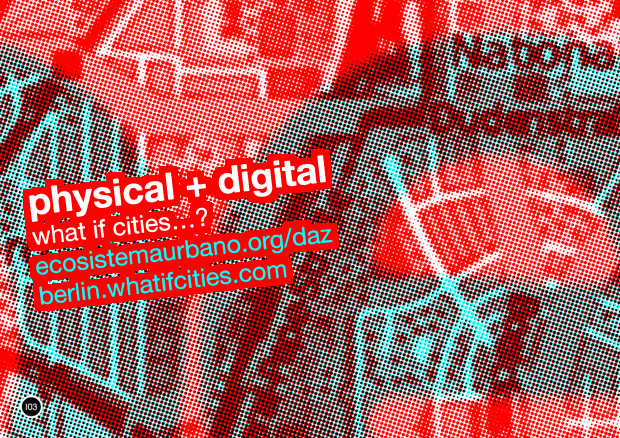 What if cities project is an ambitious urban social design project. Its aim is to bring citizenship to the design and management of their physical and social environment.

Social solidarity and quality urban space together with efficient public services are the main factors to ensure that a city provides a good quality of life. To achieve this, it is necessary to leave aside the conventional schemes which consider citizens as mere users without any possibility to participate in the design and management of their city beyond voting every four years. END_OF_DOCUMENT_TOKEN_TO_BE_REPLACED 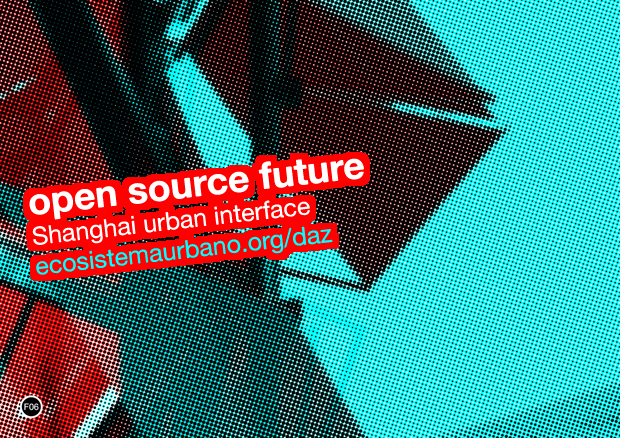 Alongside the latest expressions of art. From this perspective, the Air Tree emerges as an experimental prototype of intervention in contemporary urban public space, capable of reactivating sites and creating the conditions to empower the use of the collective space. It is conceived as a technological urban furniture, a self-sufficient climatic comfort generator, that is being used not only as a breathing space but as well interactively. END_OF_DOCUMENT_TOKEN_TO_BE_REPLACED