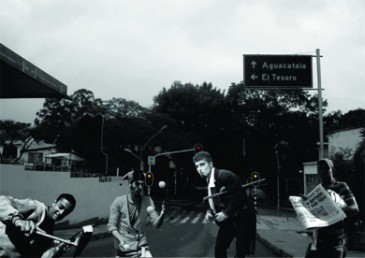 Jose Luis Vallejo and Belinda Tato have been tutors of one of the thesis projects group at the IAAC last June. There were 16 different students from many different countries such as Russia, Poland, Colombia, Turkey, India and so on. It has been very interesting and exciting to work with architects with such different backgrounds. The topics were chosen by them and there is a whole range of different ones from a very small scale to a large one.
We will be presenting some of these thesis works in the following weeks. Today we present the work by Rodrigo Toledo, an architect from Medellín, Colombia. His proposal is for his home city Medellín and he deals with the economic and social issues related to public space scene.

Rodrigo Toledo, Arq._MAA
Rodrigo Toledo is currently living in Medellín, Colombia, he just recently graduated from the Master in Advance Architecture at the Institute for Advanced Architecture of Catalonia in Barcelona, Spain. He has worked both as an architect and as a professor for the last five years. Rodrigo obtained his professional degree in 2004 at the Universidad Pontificia Bolivariana in Medellín, Colombia.

Red Light Circus
The project is intended to behave as an urban intervention that adresses an informal way of economy related to mobility – of cars, goods and information-, understanding “the urban” not as a matter of scale but of exchange and social relations in the city. Located in Medellín, Colombia, the project takes a series of specific corssroads in which informal sales, amateur circus acts, and other non-institutionalized activities take place. The intention is not to legalize these activities; it is to empower them by modifying the physicality of the already existing situation of the crossroads and taking into account that the only things crossing in these places are not just cars and pedestrians but also informal markets, information, public space use, entertainment, and enviormental issues related to traffic. There is an ecology and an economy regulated by traffic lights and spatialized by zebra crossings, that appear and disappear when the light changes from green to red. Therefore the project should act on this two traffic code devices to expand their power to condition behavior in order to create a better atmosphere for this activities while generating a network of urban circus acts distributed in the city.

A series of inventories have been made to understand the complexity of the dynamics of these crossroads:

Having in mind all the layers that interact in these sites, the project is based on two actions that work with the simultaneity of this conditions: Redrawing the zebra crossing and enhancing the traffic light.

On one hand, the zebra crossing plays the role of a circus arena when the light is red; jugglers and acrobats perform three minutes acts in order to get money from the driver/spectators waiting along the downhill roads of the city. A number of salesmen, windshield cleaners, beggars and even mimes make their way through the cars offering their services and asking for money…most of these peole are unemployed citizens, homeless persons and refugees coming from the fields. During the green light this “traffic light inhabitants” wait and rest in the sidewalks using rocks and boxes as seats and moving them according to shade. What the intervention does is to reconfigure the geometry of the zebra crossing with the following logic:
1. Making the white lines longer: The circus arena gets bigger allowing more space and possibilities for the circus acts.
2. Defining wider areas in the pattern: Microstages are generated inside the zebra.
3. Extending some lines along the road: Uphill paths between the car lanes for moving and money collection are defined.
4. Overlapping transversal paths along the road: Return circuits and microstages between the cars are created with less inclination than the road’s slope.
5. Introdicing the zebra into the sidewalk and extruding some lines: A resting area –for actors and pedestrians- with benches and microstages is provided.
6. Creating a bicycle lane: This lane will be further extended to the transversal roads of El Poblado.

On the other hand, the traffic light’s comunication system through light signals is taken as a project strategy to design a suspended inflatable tent that, through image will provide information and scenario lights, thus communicating more than just “stop, get set, go”. The suspended tent is designed as a device that:

1. Is concieved as a shading device: Providing comfort for actos and pedestrians waiting in the sidewalk.
2. Is defined by a sequence of sections: This allows it to adapt to the specific zebra design below it.
3. Is equipped with LED lights: To act as an information node and a stage scenario thus extending the circus act to the night.
4. Is equipped with P.V. cells: To make use of the high solar exposure in favor of energy production for itself and the city’s traffic light nework.

This two interventions are meant to respond to the complexity of the crossroads without making a built statement…it rather uses what is there: flows, speeds, behavior, white paint, light and air to transform the place without changing its nature.