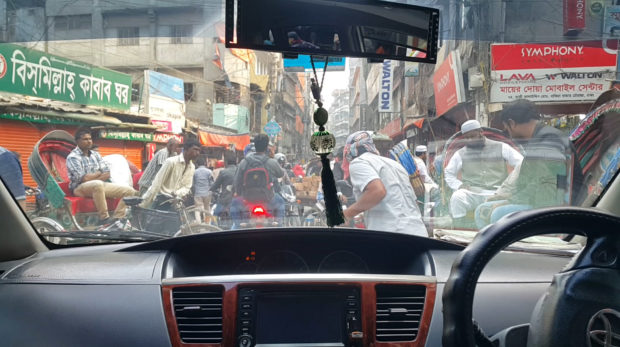 How could some of these roads be turned into walkable, human-friendly streets within a short period of 5 years? As we explained in previous posts, that was one the main challenges as, during last Spring, we worked on the Dhaka City Neighborhood Upgrading Project (DCNUP) in Bangladesh.

Dhaka is well known for its dense and mixed traffic. Between 2000 and 2010, Bangladesh experienced a faster urbanization process than South Asia as a whole. Over that period, the share of its population living in officially classified urban settlements increased by 1,69 percent each year1. Dhaka, the capital, is concentrating 1/10 of the country’s population and over a third of its urban population in 1% of the country’s territory2. As a consequence, congestion is one of the main challenges for this city. The average vehicular traffic speed in the city is 6,4 kmph3 and people spend an average of 2,4 hours a day in traffic, of which 1,3 hours are in traffic jams. There is even a concept called “car meetings”…

“I usually work at the University until 5:00 or 5:30 p.m and my return takes about one hour to two hours […] So my daily routine is more about home and work. There’s not much social life because of the traffic.” Anonymous citizen of Dhaka4

All transportation modes use the full width of the road to circulate, stop and even park. Pedestrians have sometimes to use the traffic lanes too, the sidewalks being invaded by street vendors and often piles of garbage, leading to what Western people would perceive as a complete urban chaos. 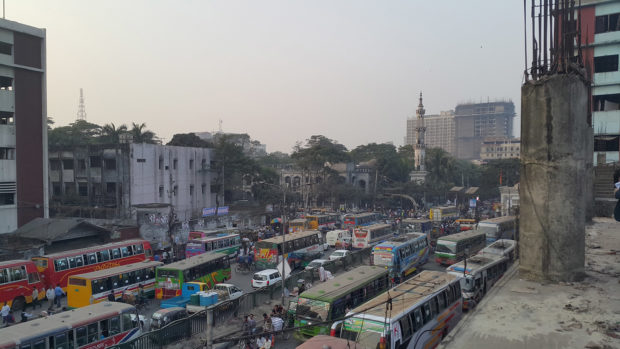 An overview of a busy avenue in Dhaka, from a five-story market under construction.

Particularly, the streets of Dhaka are also overwhelmed by rickshaws, the traditional, light pedal-powered vehicles with driver. They are one of the main ways of transportation, accounting for 28,5% of the trips in the Dhaka Metropolitan Area. Green, sustainable and more flexible than buses or cars, rickshaws can go in almost every part of the city. They provide a very efficient door-to-door service for an important part of Dhaka inhabitants, rich and poor.

However, according to the local authorities, rickshaws and other light vehicles are part of the congestion problem since they stop and park everywhere in the public space. They are at the heart of a strong debate since a huge part of them is totally informal. According to the Dhaka city corporations, there are 79.554 licensed rickshaws in the capital, while the actual number of rickshaws is estimated to be around 1.1 million. Transport authorities are regularly trying to ban them from the streets to reduce traffic… in favor of cars. 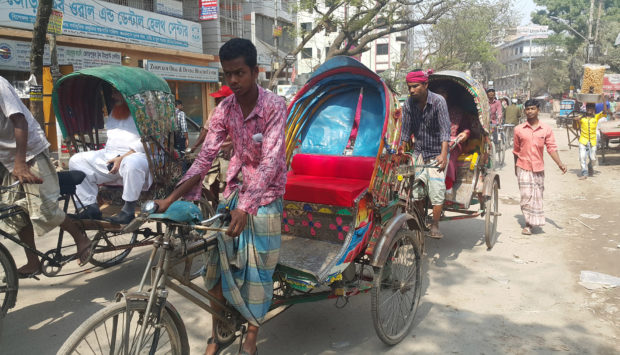 Rickshaws, the popular man-powered vehicles that constantly move and stop across the city

The whole transit system is also lacking development. Out of over 4.100 kilometers of paved roads, only about 500 kilometers (less than 12%) are suitable for bus transportation. A large part of the city’s public spaces has been developed through private initiatives, without previous planning, remaining inaccessible for buses or even cars. Thus, the use of private cars is very low in Dhaka Metropolitan Area with only 3,8% of the trips5. Which, in such a dense city, could be considered a “lifesaver”.

Despite the fact that streets are overcrowded and inadequate for pedestrians, walking is the main form of transportation in Dhaka Metropolitan Area with 37,2 % of trips made by foot —see our post on being a pedestrian in Dhaka. Pedestrian space is usually the leftover space between traffic, goods and other obstacles. They have to move across all areas of the street, walking in the intermediate zone along the outer sides of the road and even among the flowing traffic in order to cross to the other side.

As an example, you can see us trying to cross a road in this video recorded with an action camera:

However, under that apparent chaos there are unspoken rules, practices and situations that can be leveraged to improve urban quality. And, beyond the traffic jams and the lack of planning, the balance between motorized and non-motorized transit modes could be seen as one of the most sustainable ones in the world.

As we explained in our previous article on 5 things you can do in Dhaka’s public spaces, public space in Dhaka is a multidimensional entity and a place where many formal and informal uses coexist: mobility, street vending, private events, playing sports… The main challenge in this context is how to improve the conditions to create more livable places, making public space more comfortable, attractive, safe and accessible or walkable.

Through the Dhaka City Neighborhood Upgrading Project developed for the Dhaka South City Corporation and the World Bank, we propose to address this challenge by taking a careful look at the current behaviors and implementing design solutions that can introduce improvements while taking into account the city’s unstoppable dynamics.

The project includes improvement proposals for a pilot network of streets, through a series of interventions that will be applied depending on the conditions of each street:

Actions proposed for improving streets in Dhaka, making them safer and more attractive, inclusive and accessible

These interventions, when combined, significantly change the character of the street, making both rapid and long-term impact in the quality of life of its users. A comparison between the current and proposed sections of the English Road can serve as an example: 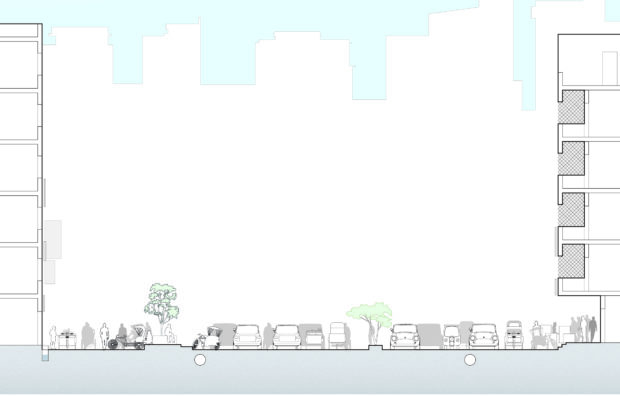 Current section of a wide avenue in Dhaka, Bangladesh. Most of the surfaces are occupied by traffic and goods, and there is no protection or comfort for pedestrians. 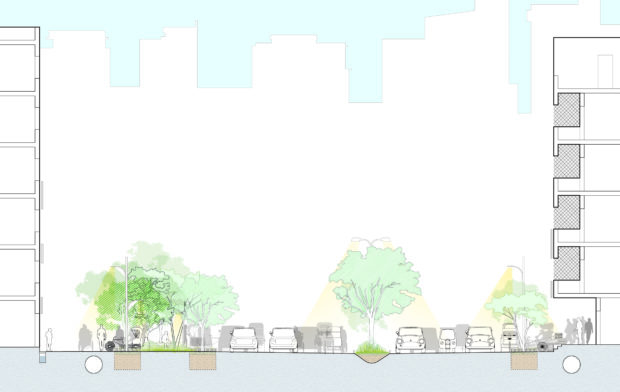 Design proposal for an avenue in Dhaka, Bangladesh. The elevated curbs have been removed to make it more accessible to pedestrians. Vegetation has been added to improve comfort and protect pedestrian spaces. Infiltration swales and lighting increase safety and security.

One of the main difficulties when trying to make streets in Dhaka more livable is finding a way to improve conditions (like space and safety) for pedestrians without over-restricting the already congested traffic. Traffic, in general, can hardly be addressed at street scale, requiring city-wide strategies that were beyond the scope of this project. And traffic, in Dhaka, is a particularly difficult beast to deal with. The behavior of vehicles and pedestrians is hardly based on any rules beyond those intuitive ones based on human attention, reaction and common sense. It has proven very difficult to regulate, and almost impossible to restrict or enforce.

So we took an intermediate approach: introducing elements that improve public space and favor better behaviors, while not imposing hard limits to the the unique, flowing nature of mobility in Bangladesh, heavily linked to its cultural, social and economic context. With that goal in mind, even small design details have to be reconsidered. For example, curbs are usually added in order to limit traffic from invading pedestrian areas. However, this “enforcement by design” approach does not seem to work in Dhaka. Right now, motorbikes and other light vehicles are invading the sidewalks even with 30-40 cm high curbs. Design, however, can contribute to education. “Curbless” streets can clearly mark different areas for pedestrians and vehicles, making them easy to differentiate and serving as a clear basis for police enforcement. In addition to that, however, they allow some room for flexibility, supporting the spontaneous flows along and across the street.

We also noticed the presence of “buffer zones”, areas of the road that are currently underused or clogged with stopped vehicles and goods, not being used as actual traffic lanes anymore. We saw this as an opportunity for expanding pedestrian areas without removing “effective” traffic lanes.

This quick graphic, made during the development of the project, tries to explain the current dynamics of many streets in Dhaka, showing the “buffer zones” between the traffic lanes and the sidewalk.

As explained in the graphics below, this approach was implemented through a “soft” delimitation of areas. We proposed to take the “buffer zones” and turn them into visible “buffer strips” protected from the flowing traffic by trees and furniture. This way, small vehicles and goods could still be operated without obstructing the traffic lanes, but the main traffic would remain separated from the purely pedestrian area. Pedestrians, in turn, would gain a wider, safer, more comfortable and accessible surface.

Plan of a wide street comparing the usage of space by motorized vehicles, light vehicles, pedestrians and goods between the current situation (left) and the proposal (right). Note the “buffer strip” between the pedestrian area and the traffic lanes. 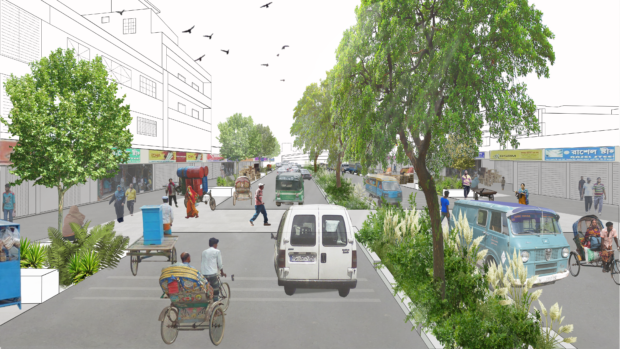 This way, by carefully observing—and discussing with experts and locals—the dynamics of the place, an innovative solution could be generated, taking the project beyond the direct application of pre-defined concepts. And this was only one of the several strategies needed to improve Dhaka’s public spaces. If you want to know more about the project, you can see its page in our portfolio, or read the previous posts about it.