Walking is the main form of transportation in the Greater Dhaka Metropolitan area since 37,2% of the trips are made by foot2. However, this mode of transportation is far from being the safest. Being a pedestrian can be very complicated as one may encounters lots of obstacle through his journey.

The typical narrow street in Dhaka features a continuous surface. There are no curbs, and the whole street can be used either by pedestrians or by light vehicles without much conflict. One of the most noticeable problems is the quality of the pavement. Most of the streets are made of concrete, sand and dirt and become unusable during the monsoon. The only obstacles are the steps that give access to the buildings, which have different heights, and the open drainage channels (side drains). Inhabitants often put “homemade bridges” above them. Street lighting can be found in some streets, but not all. 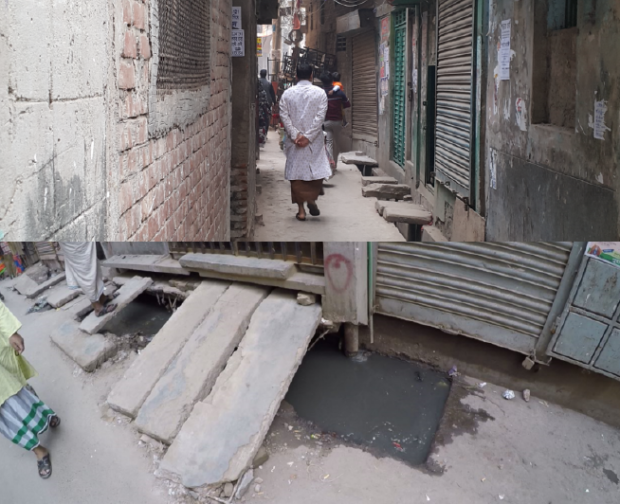 A street with an uncovered side drain // An example of a “homemade bridge” above the side drain.

In wider streets, pedestrians have to share the street with trucks, cars, rickshaws and street vendors. In this kind of street, there are usually sidewalks, separated and elevated from the traffic lanes by a curb. Part of the traffic lanes and sidewalks are typically blocked by piled goods, stopped vehicles, construction rubbish and hawkers. 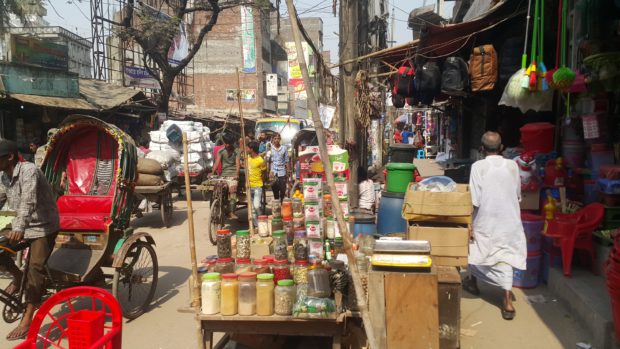 Dhaka Metropolitan city has approximately 388km of footpaths, 155 km of which are occupied by hawkers3 forcing pedestrians to step down the sidewalk and to use the traffic lanes where they must compete with cars for mobility space. There, they have to avoid parked rickshaws and streets vendors who sometimes also invade the road. Pedestrians have to step up and down the sidewalk to avoid obstacles. The elevated curb becomes an added barrier. Some streets can also be momentarily appropriated by inhabitants to organize events or for a mechanic workshop (see the previous article about “5 things you can do in Dhaka’s public spaces”).

Crossing the roads in Dhaka

Even if walking is the first mean of mobility in Dhaka, public space is not designed for pedestrians and is dominated by traffic. In some large avenues, there is no infrastructure to help pedestrians crossing the roads. In Attish Deepankar Avenue, for instance, pedestrians have to make their own way to reach the other side of the road. They have to cross several traffic lanes, separated by a central elevated strip, and a railway, avoiding several obstacles. By doing so, they draw small informal paths in the urban landscape that urban planners call “desire lines”. These desire lines can help urban designers to shape public spaces. 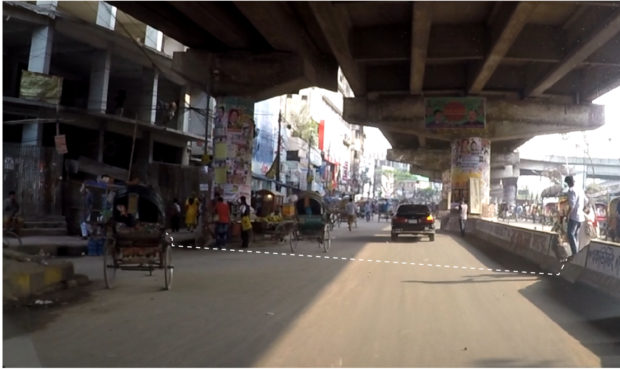 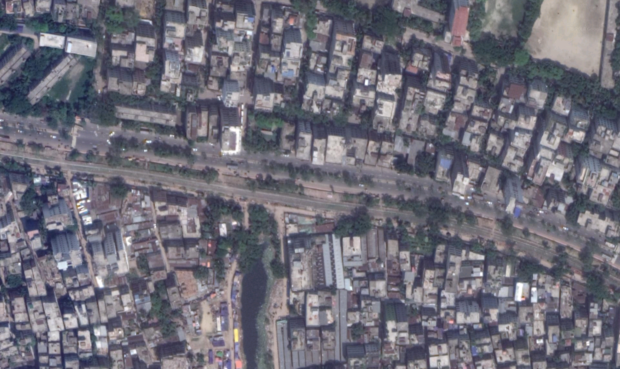 Can you spot the desire lines?

Through the Dhaka Upgrading Urban Project, Ecosistema Urbano worked to improve liveability, accessibility and walkability in Dhaka´s public spaces. One of the challenges of the project is to make public spaces more accessible and visible, easier to move to and from and to increase safety for pedestrians. Some of the key actions towards this goal are:

A careful asessment on the current dynamics of the streets allowed us to increase the safety and extension of pedestrian areas while avoiding new obstacles (like curbs) and keeping almost the same active traffice section. 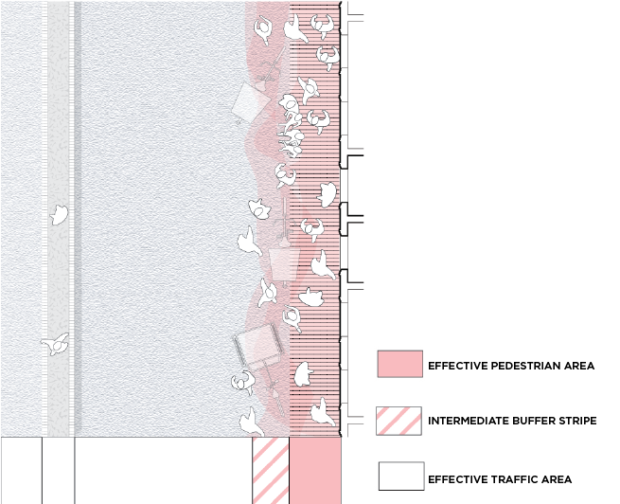 Diagram showing the current pedestrian space in a street in Dhaka 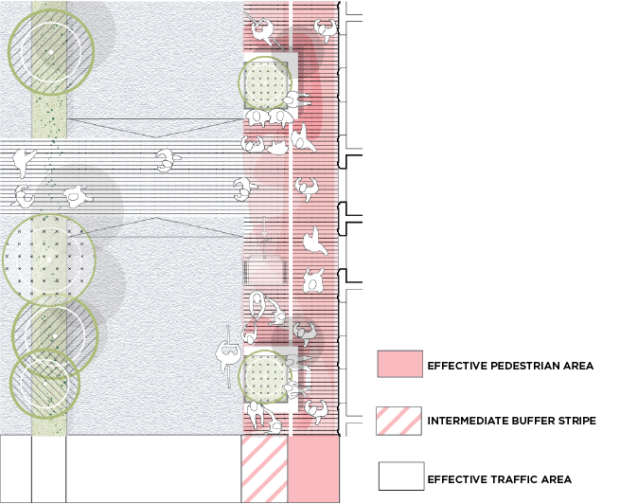 All these interventions are aimed to improve the pedestrian experience in Dhaka’s public spaces. Each intervention will be connected to a larger system or cluster. Public clusters, referred within this project as “neighborhoods”, are networks of public spaces or facilities created by connecting urban nodes with continuous corridors. Each urban node is a public space or a facility that could act as a driver for urban change. Those nodes can have different characters and uses: community centers, markets, playgrounds, parks, water surfaces and other singular spaces.