In such a dense and crowded city, the inhabitants make the most of each square meter, making public space a truly multi-layered and multi-dimensional entity. Public space is usually described as an inclusive space, open to everyone, formed by a network of streets, squares and parks. In Dhaka, because of the lack of private space, public space becomes an outdoor extension of living and working spaces. The boundaries between private and public places get blurred because of the way they are being used. Public space becomes a livelihood asset, a channel of flows and a place for recreation and social integration.

Ecosistema Urbano was in Dhaka for two weeks on February of 2018 to study Dhaka’s public spaces within the context of the Dhaka City Neighborhood Upgrading Project (we will write about this soon) and we were amazed by the diversity and intensity of uses in public spaces. Here are just five examples of things Bangladeshi people are doing in Dhaka´s public spaces.

1. Get a haircut enjoying a garden view 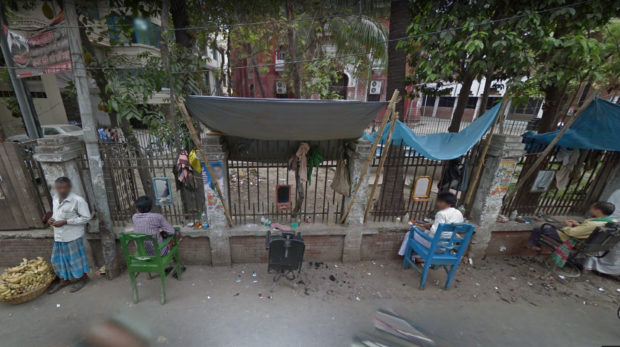 In lots of developing countries like Bangladesh, proposing services (or goods) to customers directly in the streets is a good and easy way to make money for people with low level of income, usually migrants. It does not imply any shop or financial investment. Get an old chair, a mirror and some shading and you can offer good and affordable haircuts to pedestrians. This form of entrepreneurship is less risky and more resilient than opening a formal business.

Informal businesses in Dhaka are a huge part of the city’s economy as around 5.000.000 hawkers are working in public spaces3. Most street vendors work on sidewalks, in traffic intersections or even parks or fairgrounds at all times of the day. They contribute an essential service to all socio-economic segments of the population by offering low cost goods and services at convenient locations. 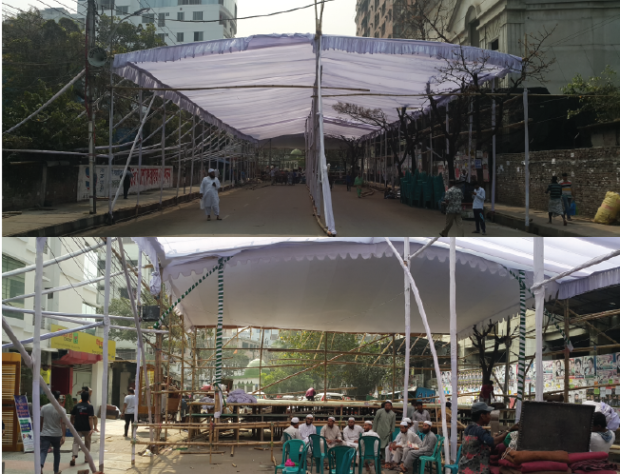 An ephemeral installation for a celebration in Azimpur Road, Dhaka, Bangladesh

The lack of private and public indoor spaces results in an important need of places to meet and organize events. Inhabitants appropriate public spaces for private events like weddings or celebrations, building bamboo installations for shading and privatizing entire streets for private use. Streets become an outdoor extension of private space, a place for social interactions.

This is why, in every narrow corner of Dhaka, you can find a pile of bamboo poles waiting for their opportunity to become a cheerful shading for any kind of celebration. 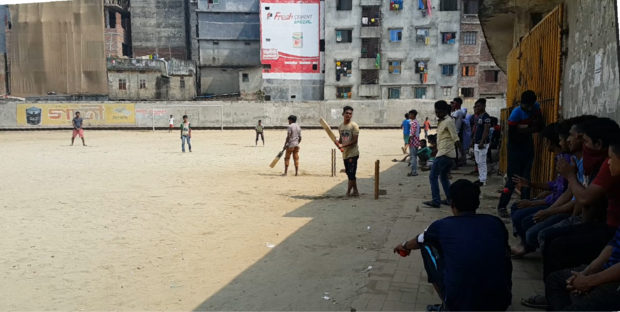 A cricket game in a playground in Dhaka, Bangladesh

There is a lack of playgrounds, parks and gyms in Dhaka. In this dense context, every open space becomes an opportunity to play and to practice sports. As a result, open spaces host lots of activities like street vending, recycling, begging or playing. These places can have multiple uses during the day, and one of the most typical ones is playing cricket. Bangladeshi people are great fans of this sport, brought by the British. A pile of old tiles can delimit a cricket field and some trees or an old wall can provide shading for an audience, turning a bare plot into a sport field. Dhaka’s inhabitants develop resilient tactics to make the most of every square meter and to overcome the lack of recreational spaces. 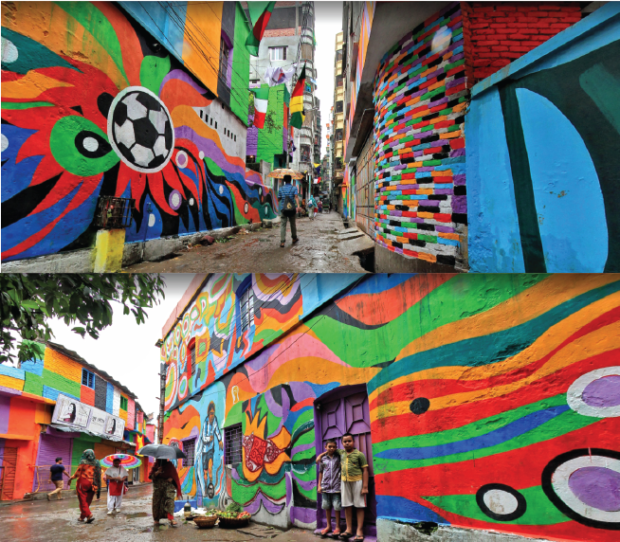 Dhaka is considered one of the least livable cities, but some parts of the city can be more enjoyable than others. Some streets of Dhaka are very colorful, their walls taken by street art. This mural was made in 2014 during the FIFA World Cup by a group of 200 volunteers that transformed a regular street with a colorful space as a part of the Goal-E project to support their favourite football team. “Goal-E” stands for “goli”, a typical Bangladeshi lane. This kind of art is a way for the inhabitants of the neighborhood to reclaim public space and to appropriate the place.

Public space in Dhaka is a multidimensional entity: a space of appropriation, of socialisation, of exchange and a livelihood asset for the poor. All these uses of space are showing how resilient and creative inhabitants of a megacity can be. But public space is also the place for pedestrians, as 37.2% of the trips in Dhaka are made by foot5. In our next article, we will further explore the pedestrian experience in Dhaka. 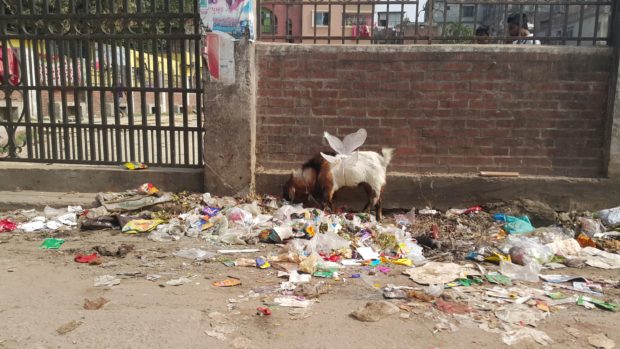 A goat? A butterfly? An angel?

You can indeed see strange things in Dhaka. Let us introduce you to… the goatterfly! This fairy-dressed animal, trying to find some food among the trash, sums up our impressions of this city: vital, complex, precarious and generally difficult to explain.

If you are curious and want to see more, we challenge you to dive into StreetView and let us know any other interesting situations you find.