Here at ecosistema urbano we often talk about urban biking (e.g. here, here) and we are also developing our own ideas to improve both cyclists life and urban quality, like in Get a Bike; but bicycle culture is a growing trend also in the United States (a nice infographic here) and #networkedurbanism students have explored different aspects of it. Biking and urbanism share much more than just cycle lanes; a student used the bike as a personal air quality monitor device; another one developed a device to map road conditions and draw cyclist-targeted maps; a third one focused on the problem of the increasing number of bike thefts.

In Actual Air Michael Styczynski develops a low cost DIY device to monitor air quality that can be mounted on bicycles. He observed that the infrastructure of air-monitoring devices in Boston provides a misleading portrait of air quality because they are generally installed in places that are not so significant to people (e.g. on the top of a building). Using the bike as a means to carry his device, he plans to monitor the air quality of the daily environment we live in and, through that, to raise the awareness and create a network of people interested in the problem. As he says “the data should be directly connected to how people experience urban space, and should reflect the variety of experiences people have within the city.” 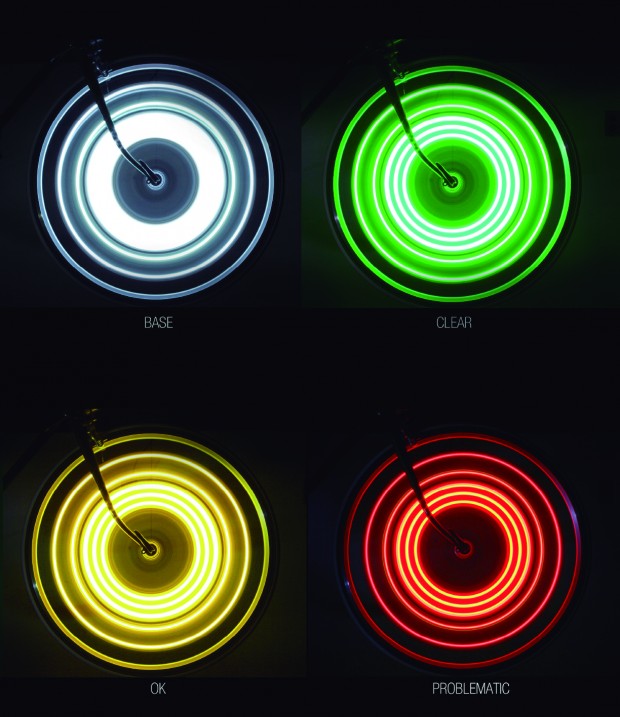 In his own words the ultimate goal of the project “is to promote exchange among users of the device, and to encourage the development of a robust and extensive network of interested individuals. The prototypes thus become generators that can catalyze the imagination of a wider audience. This results from the flexibility of the project which allows it to be  adapted to the interests of different individuals and subcultures within the broader community of bicycle enthusiasts. In this way the practice of data capture is revolutionized by collective, yet individualized research“.
You can read about the whole project in the #networkedurbanism post and you can see a video of the device tested on the road here.

Andrew Leonard decided to begin his studio experience with a simple idea: “go out and explore Boston.” He had lived and worked in Boston for 8 years but during his exploration of the city he found that, even if Boston has been making great strides to become a more cyclable city, going around by bike wasn’t always easy. He found many obstacles, and a general lack of bicycle infrastructure. Trying to make his rides easier he began to look at maps, both cycle specific and common digital maps, but he could not find specific information about the street conditions, bicycle lanes when existing were just colour coded lines transposed on top of street centerlines, and generally he found that maps were too simplified and diagrammatic to help cyclists.

The iBike project is a tool to draw a thicker and more informative layer on maps using a bike mounted sensor he designed and built, the sensor collects two series of geo-located data: micro-topography and speed. These two parameters, which are two major factors in the comfort of a ride, are then drawn on maps  that “provide the cyclist with a layer of information absent in existing cycle maps that relates directly to the human experience.” Using the technology embedded in smart phones the project may be further developed into a crowd-sourcing app: “iBike can redraw the city based on the experience of cycling temporally, showing conditions as they change. The maps have the ability to evolve as roads change, as construction begins or ends, or even diurnally, so that cyclists can have a better understanding of what the riding conditions are likely to be at any given time.”
iBike was selected for further development by the “Harvard Innovation Lab” and was finalist for the “2013 President’s Challenge,” you can read about the whole design process in the #networkedurbanism post.

Lulu Li focused on a trickier aspect of the growing bicycle culture; the significant growth in cycling correlates with another phenomenon: an increase in bike thefts. Stolen bicycles are difficult to recover and bike thefts are also difficult to investigate, so victims are frequently left alone and helpless to face this crime. Bikenapped is an online platform that through gathering a community of individual voices aims to raise awareness and to “speak with a collective voice to shed light on the problem, and work together to find solutions.” On the website you can report your stolen bike on a map and share your story with other victims to participate in a user-generated database of bike thefts in Boston, connecting with your neighbors and community and sharing your story empowers you to act, to demand for better safety measures in your area and to be more vigilant. 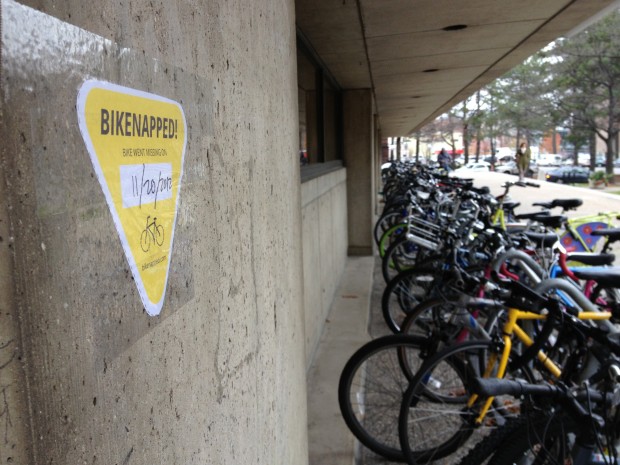 Bikenapped seeks to connect the digital realm and the urban environment, when you report a theft on the website you can print and “post a notice at the physical place of the theft to warn others of what had happened. The information is not relevant on the Internet alone, it is relevant to all the people who use the spaces where these thefts happen.”
The reaction to Bikenapped has been extremely positive, since it launched, bikenapped.com has been featured in Metro.us and BostInno, as well as several bicycling-specific blogs and websites. The website had over 2,500 unique visitors within the first 12 days, many from beyond the borders of Boston/Cambridge, all the way from Portland and California. Read about the whole process on #networkedurbanism