Kits for Kids: involving the youngest citizens in participatory planning

As you may know, in our ‘toolkit’ for the participatory processes we usually carry out in parallel to our urban projects, there are often some materials we specifically conceive to allow the participation of children and teenagers.  As part of our commitment towards inclusive processes we aim to target different social groups in our activities; especially that part of civic society that usually doesn’t have a voice in the collective debate about urban issues. Children have a particularly honest and imaginative look, and trying to understand a society or culture through their eyes is a privilege we keep enjoying project after project.

In particular, during our four latest projects in South America we detected this specific need to involve young population in participatory processes and we begun to design specific ‘kits’ for kids. As a result, we now have four different versions, developed in close relationship with the local context but also with many common features in mind. These ‘children participation kits’ are designed as a series of A4 or A3 paper sheets and they are explicitly designed to be easily reproducible. All the kits you can see in this post were used during the activities with children carried out by ecosistema urbano and our local collaborators in the schools and children’s centers of the city where the projects took place.

The different versions of these kits share the same aims:

The material that composes each kit is also conceived with two other specific results in mind:

So… let us briefly illustrate the five-year-long history of our children participation kit.

Although we had already used stencils and other types of pre-designed ‘frames’ for all kind of activities involving children, it was during the dreamhamar project in 2011 that we extended the concept to a wider scale. The idea was to connect with a local educational programme called Cultural Rucksack and leverage it to amplify the network design process and bring it to the younger citizens of Hamar. We provided several teachers with a simple frame representing the shape of Stortorget —the main square we were redesigning— and they invited their young students to draw their ideal square. Alongside this, some groups also were invited to our local meeting space to create several models. 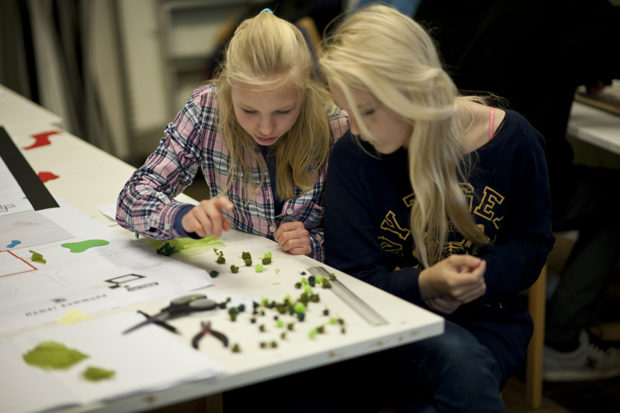 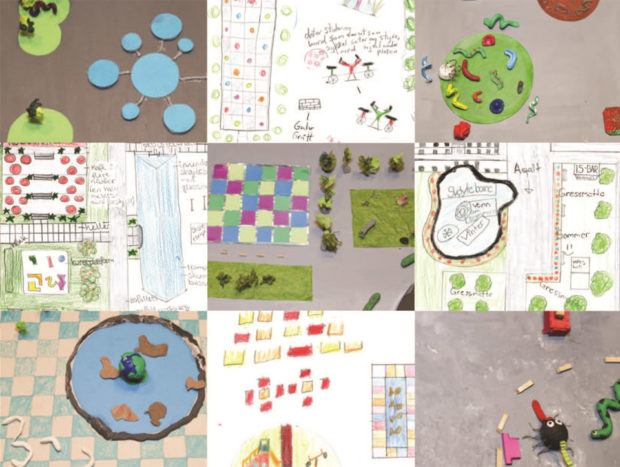 The result was beautiful, varied and creative, and gave us a unique look into the local culture. More than 300 drawings were made, of whose you can see a small selection in this Flickr gallery. Quick observation exercise for you: what do they all —but one or two— have in common?

A smaller (in scale) but still interesting test of this kind of activities was Exuma Garden of Dreams, a workshop we directed during February 2014. The goal was to involve both children, teenagers and adults in a collective reflection around the opportunities and needs of Georgetown. We developed a couple of simple formats to write and visualize people’s thoughts and proposals.

In this second try, we further developed the idea of the final installation, which became a more important part of the whole project. We tried to find a communicative, engaging way of displaying the outcomes of the workshops, and at the same time wanted the resulting ‘exhibition’ to become a transformative intervention in an underused public space nearby. 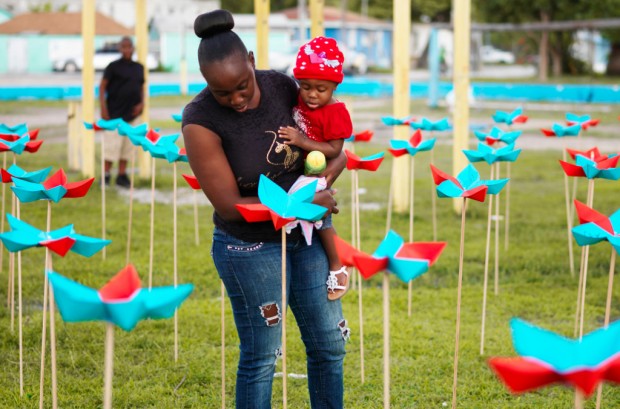 To see more pictures of the process and fully understand the activity, you can have a look at this much more detailed post.

This was the first actual ‘kit for kids’ to be designed, back in 2014 on the occasion of the Masterplan of the Historic Downtown of Asunción, Paraguay. It was divided in three sections sorted by 3 age ranges: very young children aged 5 to 8 years whose activity consists on identifying the elements that characterize the urban environment they live in and draw what they would like it to be; kids from 9 to 11 years were invited to narrate with text and illustrations a typical day in town; teenagers from 12 to 16 were engaged in a slightly more complex and creative activity, inventing a story and choosing one of the emblematic areas of the historic downtown as the setting for that story. 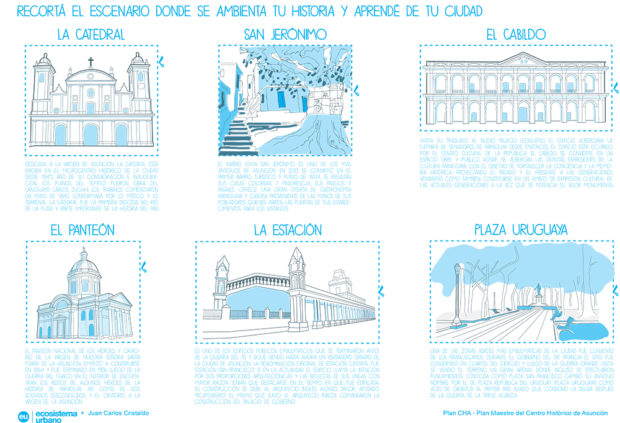 As a bonus activity, the last page of the kit contains an origami model, where kids had to write their ideas for the Historic Center of Asunción and create their little houses to build up “the city of their dreams”. 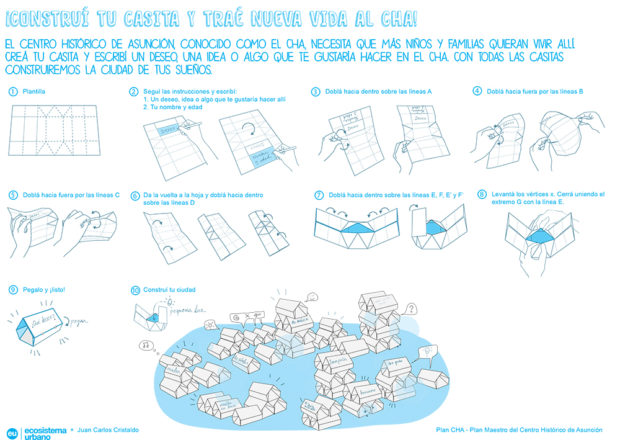 Here you can visualize the original Plan CHA kit.

For the kit of Centro Histórico Abierto in Tegucigalpa we went a bit futher in the experimentation around collective installations, developing the concept of a modular map of the “city of dreams” that was also included in the following  kits. During the activities, described in this post, children of different ages were invited to draw their daily route from home to school, and then they had to create their ‘piece’ of city using elements of their choosing among drawings, texts, transparent figures or stickers. 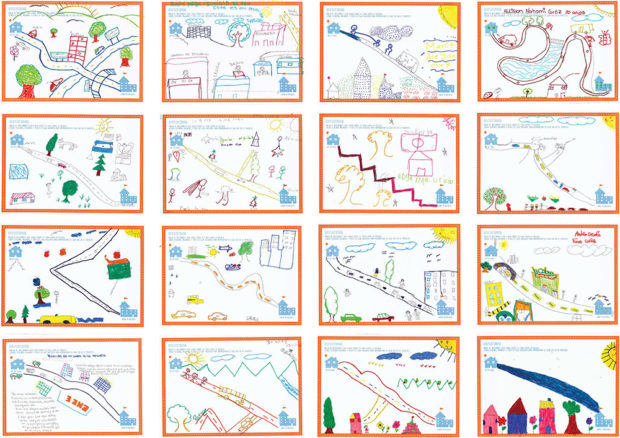 By putting together all the individual works, a giant map of the ideal city according to kid’s aspirations was created. 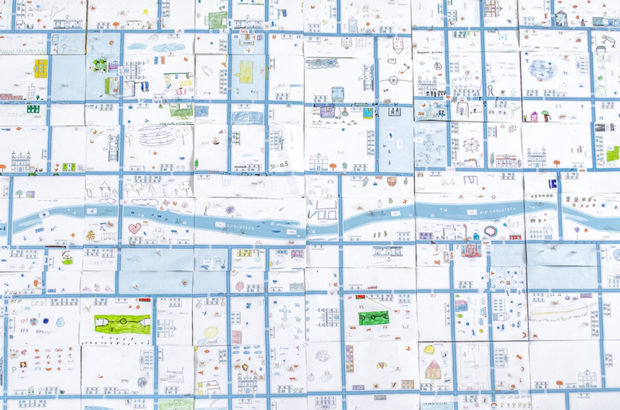 Here you can visualize the original Centro Histórico Abierto kit.

It was one of the participatory activities we did for Urban and Territorial Planning and Sustainability Plan for the city of Encarnación that we developed in 2015-2016. The structure of the kit is similar to the previous one; a first part inviting kids to reflect about their daily urban experience, and the second one asking for their vision about the future of the city. The dissemination of the kit in this occasion was much wider, since it was distributed in several schools and the activities with children were lead by local teachers. We gathered more than 3000 drawings! 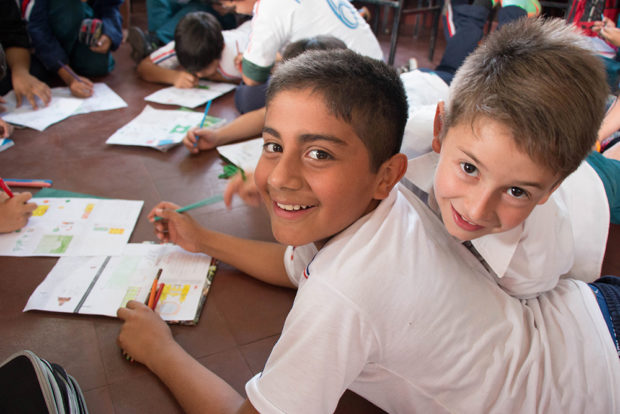 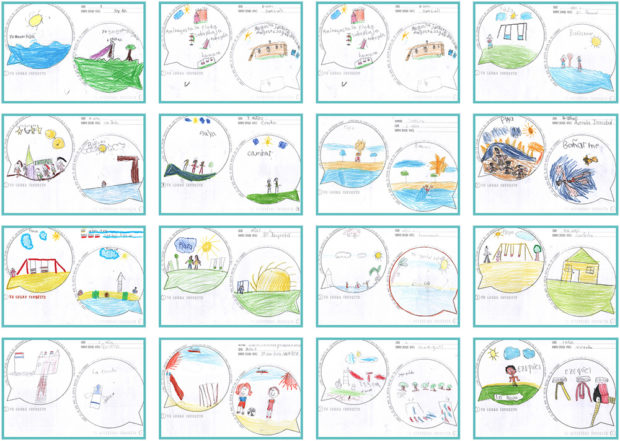 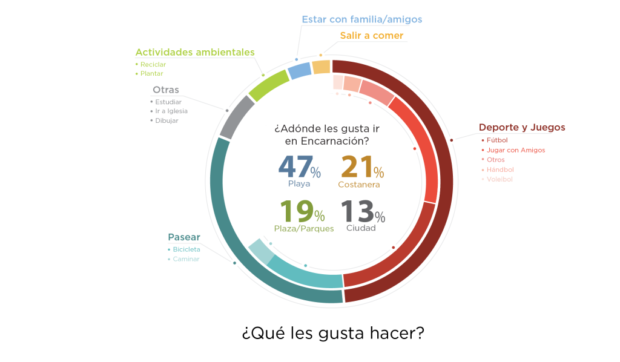 The results of the first part of the exercise gave us many answers to the question “What do you like to do in your city?“, thanks to the high number of samples collected. The resulting graphics reporting this data are part of the Analysis Document we did when we first approached the study of the city and its social context. 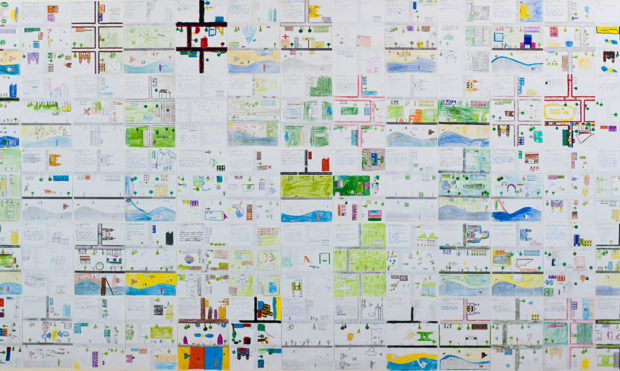 The drawings of the city were put together as puzzle pieces to form a 15 meter long installation in a local cultural center. If you are curious, you can see many more pictures of the process and the results in this other gallery.

And here you can visualize the original Encarnación kit.

For our latest project, Cuenca Red – Public Space Reactivation of the Historical Center of Cuenca, Ecuador,  we were rethinking the format we defined for the previous participation kits, and we adapted it to the specificity of local urban context. The idea of the “collective city of dreams” as final result of the activity remained, but the individual module used for it this time had the shape of the typical block of the historic center of the city. 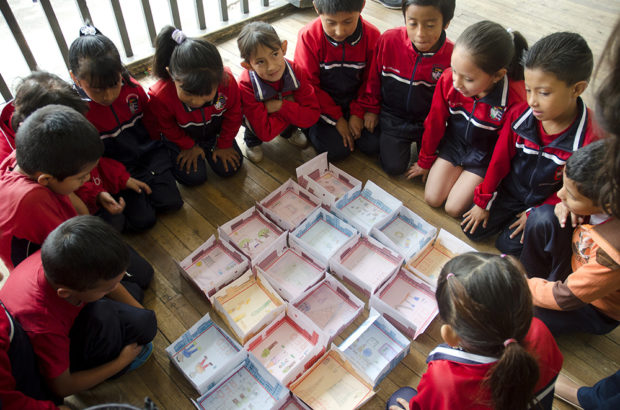 This simple element was used also to display short messages in interviews to citizens, and as module for the final exhibition carried out by university students. It certainly proved its versability! Adults and kids were invited to write or draw their dreams for their city in the inner part of the block.

Here you can visualize the original Cuenca Red kit.

Along all these iterations, the first idea has become a simple yet powerful tool for citizen involvement, and we are already looking forward to the next project we can use this in.

It is flexible —you can turn the design into anything you want— but also easy to replicate —you can follow again and again the same simple steps to organize it: contacting schools, handing the kit to teachers, celebrating results with the kids, and creating an exhibition in some public place—.

It is also extremely cheap, and has a close-to-zero weight that every traveler will love. You can bring the source files with you and produce it locally in just about every printer you find; and if you don’t mind the colors you can even throw it into a photocopier and have thousands of copies almost instantly.

And last but not least, it is fun. Both teachers and children enjoyed every step of the activity, and we are always delighted to receive a new batch of imaginative, colorful creations.

We hope you like the idea and the results! We would love to hear from similar experiences and see your own models, methods and dynamics for bringing children closer to their cities.