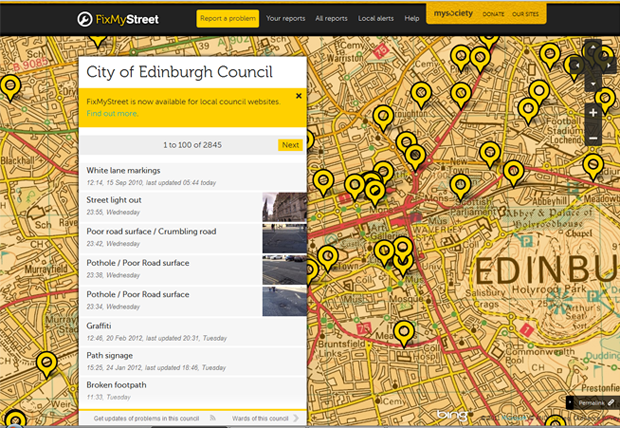 To kick off with the #SocialToolbox series, here is one of the first and most remarkable −almost ‘classic’− examples of an urban social tool bridging the physical “body” of the city and the digital “soul” where humans and data interact.

FixMyStreet is a site to help people report, view, or discuss local problems they’ve found to their local council by simply locating them on a map. It launched in early February 2007. FixMyStreet is primarily for reporting things which are broken or dirty or damaged or dumped, and need fixing, cleaning or clearing, such as: abandoned vehicles, dog fouling, flyposting or graffiti, flytipping or litter, streetcleaning, such as broken glass in a cycle lane, unlit lamposts, potholes.

This site was built by mySociety, in conjunction with the Young Foundation. mySociety is the project of a registered charity which has grown out of the community of volunteers who built sites like TheyWorkForYou.com. mySociety’s primary mission is to build Internet projects which give people simple, tangible benefits in the civic and community aspects of their lives. The first project was WriteToThem, where you can write to any of your elected representatives, for free.
FixMyStreet is funded by the Department for Constitutional Affairs (now the Ministry of Justice). 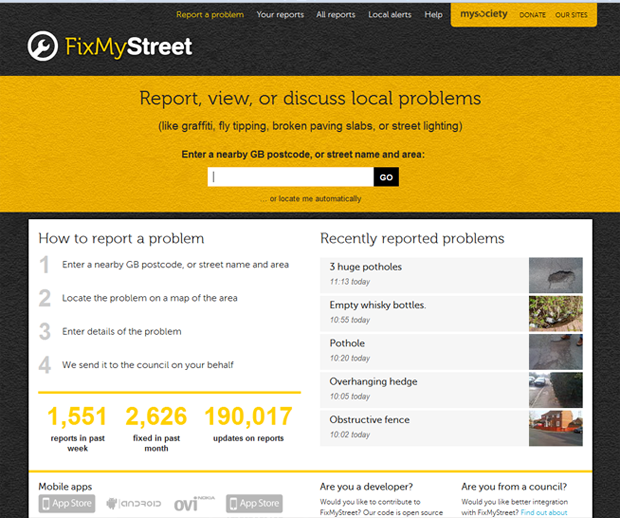 How does FixMyStreet work?

FixMyStreet official website only covers the countries of Great Britain. It also offers branded, hosted versions of the software for local council websites. After entering a postcode or location, you are presented with a map of that area. You can view problems already reported in that area, or report ones of your own simply by clicking on the map at the location of the problem. Problems are reported to the relevant council by email. The council can then resolve the problem the way they normally would. Alternatively, you can discuss the problem on the website with others, and then together lobby the council to fix it, or fix it directly yourselves.

The site is free to use and can be used as well on your mobile: there are apps available for iPhone, Android and Nokia, in different versions as they are being adapted to or developed by different cities.

The software behind this site is open source, that is, you can download the source code and help develop it. You’re welcome to use it in your own projects, although you must also make the source code available to any such projects. Fiksgatami is an example of the code being used in a Norwegian version of this site, but the number is constantly growing so by the time this post is published there will be some more. The concept is so clear and powerful that some proprietary equivalents like ArreglaMiCalle or ReparaCiudad (to mention some Spanish examples) are being developed as startups, usually with focus on mobile applications.

If you are willing to help this project in either technical or non-technical ways, you can see the Get Involved page. 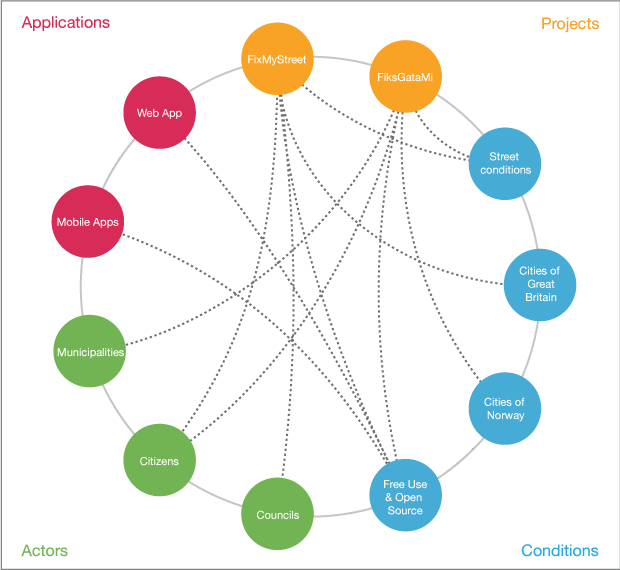 From the growing number of digital platforms that are being build in order to allow citizens and communities to engage with their cities, FixMyStreet is one of the best examples: It makes a point in clearly solving one real issue, both for citizens and for the municipality. It turns every citizen into an active actor who, by solving a personal issue, also contributes to the common good, applying the concept of crowdsourcing to the ‘surveillance’ aspect of the citie’s maintenance.

Being open source means it can be adapted and implemented in any place, building on cultural freedom and (almost) universal access. The number of projects using this software (orange nodes in the graphic above) could grow without limits and the joined development efforts of the growing community would turn FixMyStreet into a better software.

Of course there will always be bugs and issues to be solved, and the design and usability could be improved, but the application does such a good job that we really hope that mySociety manages to keep it under active development for the years to come.