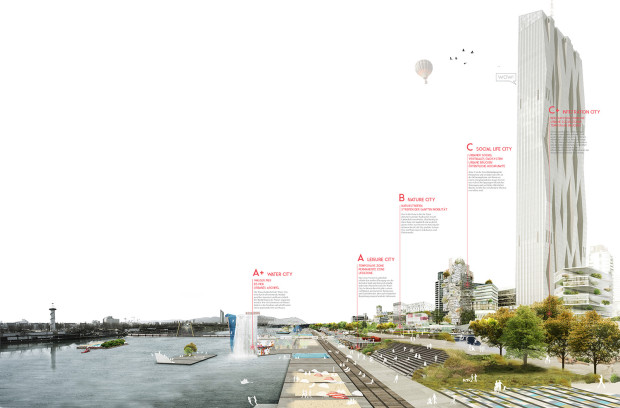 Last November we were selected, in collaboration with Transform.city, to participate in the Neue Copa Cagrana International shortlisted competition in Vienna (Austria). The scope of the competition was the urban revitalization and definition of the Master Plan in the area Neue Copa Cagrana defining an urban proposal and the relationship of this part of the city with the river.
We were selected along with other 8 teams, including renowned firms such as Dominique Perrault, AZPML, or West 8.

The study area is located next to Donau City, on the left bank of the new Danube Canal, Neue Donau, passing through the city of Vienna. It is a neighborhood of mainly tertiary character with office buildings of great height, developed in the last 20 years, including the Vienna International Centre. 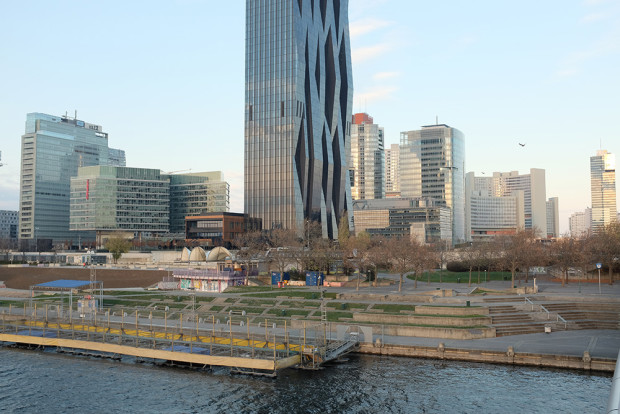 Copa Cagrana – the intervention area, between the Danube and the new urban area with the D. Perrault’s tower

Despite the good connection with the city center, the large number of buildings and the excellent existing natural qualities, the area is almost deserted during day and night. This is mainly due to the lack of variety of uses, commercial facilities and recreational areas.
The proposal develops a series of strategies to revitalize an area that already has the optimal conditions to become a landmark for the city of Vienna:

The proposal aims to incorporate urban, commercial and leisure life at a time when Vienna is starting to look for other forms of identity for the river area. It is important to bring new residents to help to create urban activity throughout day and night, summer and winter seasons by permanent and temporary uses. The mixed-use and residential functions in the first row, including the urban boulevard, have the potential to complete and complement the existing urban fabric and establish, for the first time, the necessary connections to make Donau City a functioning and exciting neighbourhood.

Activity diagram for the different seasons

The project proposes a high density urban prosthesis, combining housing, office, commercial and public space, in order to create an active urban spot connected to the surrounding, improving its identity and multiplying the possibilities of use.
The proposal seeks to make Donau City easier to be understood and perceived, with a clear connection to Danube river and its waterfront. Therefore, the proposal is the missing link to the completion of the Donaustadt and is, at the same time, the necessary catalyst to enable the urban regeneration in the area.

Copa Cagrana will be an exciting new urban spot in Wien, which is perfectly connected to the city network thanks to the transport connectivity and subway line. Through the physical proximity with existing Donau City, Donau Insel and surrounding neighborhoods, the area will increase popularity and will offer more attractions to the users.
The newly created waterfront will be an urban catalyser with a variety of urban functions, with uses according to the seasons and day and night time:
The FILTER ZONE is a more quiet area free of commercial activities.
The TEMPORARY ZONE changes according the different seasons, with beach bars in the summer, pop-up restaurants, terraces and platforms, etc.
The WATERFRONT is an enjoyable walkable strip with piers and exciting water activities for summer and winter.

A new urban and natural environment intrinsically connected with surrounding nature.
It will be the connecting environment between Donauinsel and Donau Park but also extending its limits over the water landscape of Neue Donau to create a vibrant and diverse waterscape. 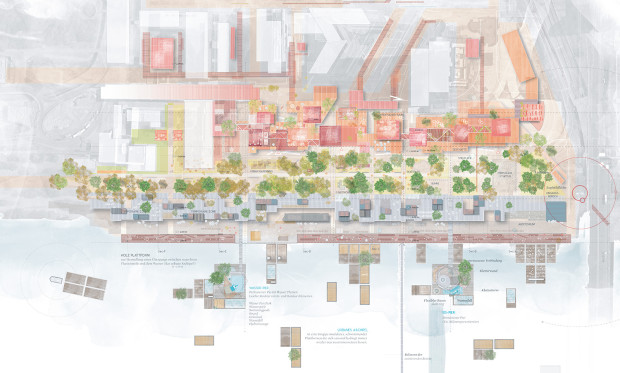 It is important to create the communication channels in order to advertise and share information about the ongoing activities and as a way to share potential ideas to be implemented. This web APP is thought to work as a social network that provides information for the citizens of Copa Cagrana on what kind of activities they can do on this renewed urban area.
Users will be able to register and create a user profile, with this, they will have the opportunity of proposing activities that will make use of the beautiful surroundings and installations of this urban space. The commercial sector will also have their own space. They will have the possibility of creating a profile which will allow them to publicize their products and business, as well as invite and inform citizens about special deals, offers, events and other celebrations.

Seeking to achieve these four objectives, the proposal creates 5 zones acting together and related to each other:

The energy of city life will splash towards Donau City and the urban plinth will extend its limits to bring activity and reconfigure the public spaces around the corporative and residential buildings. These urban tentacles will extend urban plinth limits with linear and small scale pavilions, pop-up stores and cafes, etc. reconnecting and renewing the pedestrian pathways of the Donau city.

Zone C proposal is the most powerful urban energy boost, as it provides a large amount of overlapped new programs and public spaces easily accessible at different levels.
Areas:
Urban plinth: fragmented construction from 1 to 4 stories high, multiple programs with predominance of commercial spaces overlapped with public spaces at different levels.
Vertical ecosystems: housing towers with a myriad of different typologies to create a diverse neighbourhood. The housing units help to create a dense neighbourhood with urban life throughout the day.
Urban bridge: On the tenth floor, same level as the top terrace of the existing linear building of social housing, a bridge is creating connections between semi public spaces, with diverse programs within the vertical ecosystems.
Public peaks: the top floor of the different towers is also part of the network of semi public spaces within the vertical ecosystems. These spaces can hold multiple programs and part of their success will be the privileged point of view of the city (terraces, cafes, common spaces,… )

This is a zone where nature is predominant and the urban plinth is melting its limits with the landscape. At the same time, the natural character of this area helps to make the transition between the bigger, urban scale of zone C and both the lower scale of zone B and the waterscape towards Donauinsel, combining natural areas with paths for soft mobility.

Different cross sections in zones A and B

Leisure cityscape to allow the transition between the formal city and the vibrant and ever changing new waterscape of zone C+. It will hold multiple permanent uses but also temporary programs and seasonal activities. There are multiple temporary and permanent uses in small buildings with similar language, as well as a new riverside walk that will extend to create a comfortable linear space. The relationship with water and the elevation difference will be resolved with a wooden platform that will act as an urban sofa to relax and enjoy the presence and proximity of the river.

Vibrant and ever changing waterscape in continuous evolution. It will extend the activities of the new urban spot towards the water. 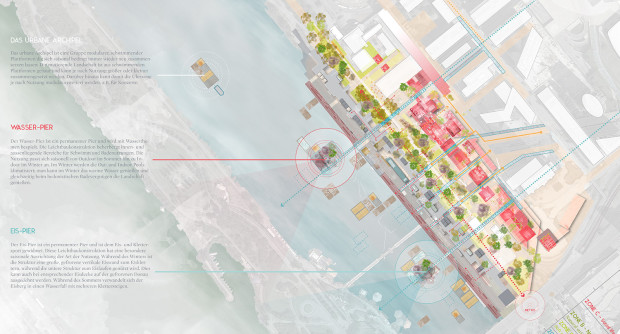 + water pier: permanent pier, water thematic. Light structure with indoor and outdoor spaces to allow the creation of different bathing experiences. The use will change seasonally, during the winter, outdoor and indoor climatized pools will allow the user to be in connection with the surrounding natural landscape while having a pleasant bathing experience.

The water pier for summer activities

+ ice pier: permanent pier, ice and climbing sports oriented. Light structure with a strong seasonal connection. During the winter, part of the structure will be a huge frozen and faceted vertical surface to practice ice climbing, while the lower platform will host different ice skating outdoor rinks to practice in connection with the water and natural landscape. During the summer the ice surface is transformed into a huge waterfall falling from the upper level into the river. 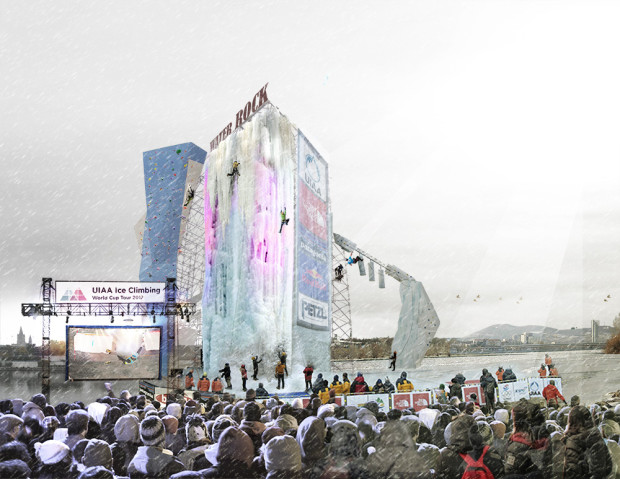 The ice pier for winter climbing

+The urban archipelago: big modular and floating ever changing extension of the waterfront. The different seasons and uses will dramatically transform its configuration. This mutant landscape is built with modular floating platforms/barges that can be combined to create larger flat surfaces if necessary. These platforms can be connected to the limit line of the waterfront to extend its surface.

If you want to know more about the proposals you can download the competition panels here:
Panel 1   Panel 2   Panel 3   Panel 4