Network design is the methodology Ecosistema Urbano is going to apply in the redesigning process of Storget Square, in Hamar. The name of the project is dreamhamar. 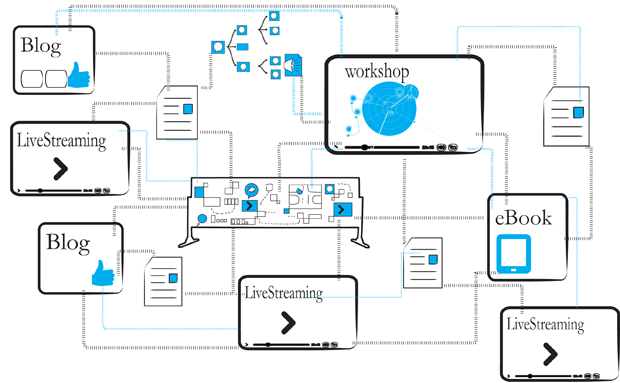 It is basically a step forward in citizen participation processes. The best part is, network design can be explained with somethin as simple and familiar as pizza.

Imagine we want to create a recipe for pizza, a great pizza. I am choosing pizza because Geir Cock, an architect from the Hamar Kommune, told me pizza is Norway’s favorite food right now – Are you as shocked as I am about this???

Now, if I wanted to make pizza through a collaborative process, I would make a post on my blog, my Twitter or my Facebook account, asking my friends for their pizza recipes – I would also call my mom, but hey, that’s just me.

We would all negotiate and reach a consensus on every ingredient,every preparation method, every final touch. We would probably end up with a little bit from each recipe, a compromise. Probably none of the people participating would be happy with the final recipe but just with the ingredients or cooking methods they won a negotiation on, like “The pizza is crap but I won the voting on the amount of tomato sauce which is just purrrrrrrrfect!“. This is how most collavorative processes work since the 70s.

The third possibility is to make pizza network design style. For this, I would make a post on my blog, write my favorite chefs and ask them to help me too. I would tell my friends to tell their friends and, all together, we would talk and debate about what makes a pizza a great pizza. I would probably organize a party for all of us to share ideas, talk about pizza, and even create a website about it, so those people who do not live near me could participate too. The more the merrier.

At the end of this collective brainstorming, I would have learned what ingredients are essential, the best baking methods – old, new, and impossible-, and what people expects from a good pizza. So I would collect all the info, and all of the ideas, and I would go back to my kitchen to write down three or four different recipes based on all the input received.

Then I would test them. They would be my own recipes, but close enough to the collected ideas that people could relate to them, be pleased with them in spite of being something different from what they said.

Also, “how to make pizza” would probably end up being a social network star – maybe even a global trend. I would have met lots of new friends – who would have also made lots of new friends themselves -, created a website debating the current state of pizza, and end up with the feeling of having become part of something.

And, of course, with the most amazing pizza recipe ever.

Read “public space” where I wrote “pizza” and you have the process for redesigning Stortorget Square. This is network design.

The outcome, the new square, will not be the work of one architect (traditional style), neither the result of a conventional collavorative process, a little Frankesntein from an exhausting consensual process. It would be the realization of what the people of Hamar have dreamt for Stortorget Square. Something new you can relate to.

So, come meet us. Join the dreamhamar network!