The Clinton Climate Initiative, from the William J. Clinton Foundation, has decided to promote 16 good practices in sustainable urban growth. Everybody is making list, as Forbes, but they don’t present very well the meaning of thist list. Through the website, we can see that the Initiative push the urban regeneration and the improvement of green energy as goals to reach better cities and better life’s. From this first post, our aim is communicate information about those projects, receive comments from our community and in two weeks offer a critical overview and some strategic keys to understand why some of the presented projects are in this list, and why some have no reasons. I hope we will generate some group of discussion on the present of our cities and some positive criticism on the ways to improve them.

The four first projects we will present today are the first in the list: Destiny Florida in Destiny, Florida (USA), Dockside Green in Victoria, British Columbia, Canada, Godrej Garden City in Ahmedabad, India and Elephant & Castle in London Borough of Southwark, England.

Destiny Florida
This project is connected to an interesting strategic plan called: How shall we grow? Witch think about the future of the cities in 2050 in Florida. 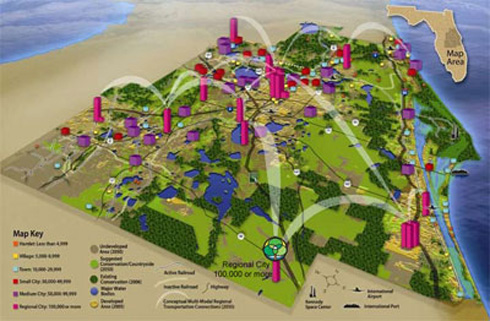 A prototype for future cities, Destiny will be a forward-thinking Environmentally Planned Community of Today™ operating with minimal impact on the environment and a hub where the latest clean technology innovations will emerge. While Destiny’s boundary is marked by 64-square miles, its footprint is much smaller, with a compact design and a focus on preservation. Destiny will preserve more land than it uses. Through its creation, many thousands of acres will be protected, forever safe from development. Destiny will only utilize previously disturbed land, leaving untouched and pristine open space intact.
The idea of creating a sustainable, self-contained urban center outside of existing city borders was developed and adopted in the Central Florida Regional Growth Vision. The consortium of organizations identified areas in the Central Florida area where independent, self-sustaining urban cores could be created to halt continued sprawl from existing cities.

Dockside Green
Maybe the most completed overview of the project in this website. 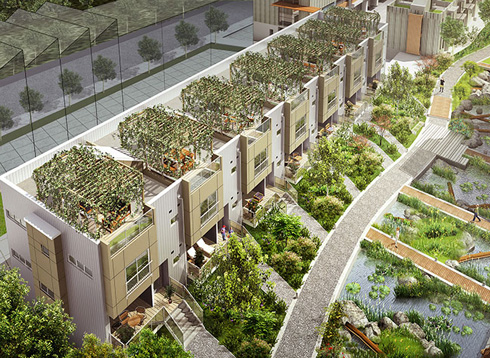 While there have been eco-residential and eco-industrial developments in the past, none, to our knowledge have incorporated such a wide range of uses as Dockside Green.

A model for holistic, closed-loop design, Dockside Green will function as a total environmental system in which form, structure, materials, mechanical and electrical systems will be interrelated and interdependent – a largely self-sufficient, sustainable community where waste from one area will provide fuel for another. Here you will find a dynamic environment where residents, employees, neighbouring businesses and the broader community will interact in a healthy and safe environment, reclaimed from disuse and contamination.

Godrej Garden City
There is no website, I only find those images, not very charming, about some Green?? skyscrapers in the website worldarchitecturenews. 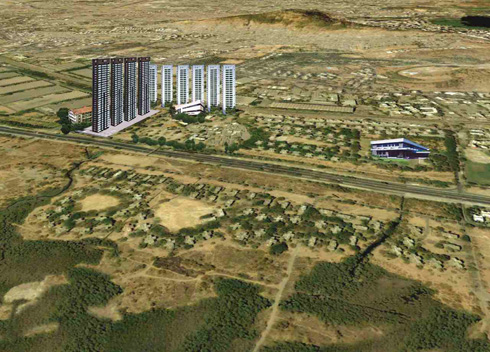 Godrej Garden City is a 10 towers project comprised of 20 storey skyscrapers and above. Recently supported by the Clinton Climate Initiative’s Climate Positive Development Program, the project has been chosen as one which demonstrates urban growth in a ‘climate positive’ way.
Being located at the fast emerging central suburb of Mumbai – Vikhroli, this property is at the heart of a dynamically evolving city. Of the six A-type towers, four towers already completed and occupied, the four B-type towers are set for construction this year. Most rooms overlook the scenic landscape of the verdant mangrove stretch and the distant hills of Ahmedabad in India. The property is judiciously embellished with amenities selected to serve aesthetic and practical concerns, keeping contemporary living standards in mind. The residential towers are earthquake-resistant, constructed using computerized ready-mix concrete and corrosion-resistant steel reinforcement.

Elephant & Castle
Probably the most interesting of this selection, because of the regeneration of a big communication center in London Borough of Southwark 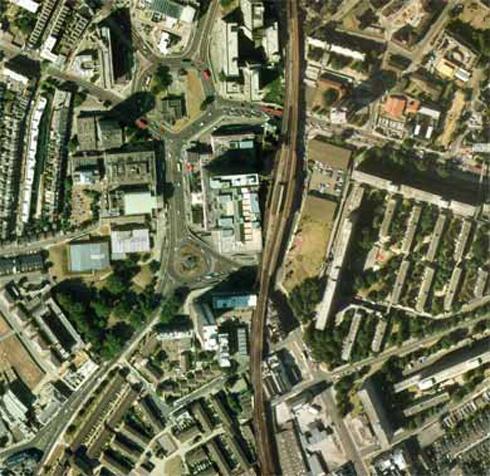 Elephant and Castle’s strengths include excellent transport links, including two zone one tube stations, an overland rail station and hundreds of buses each hour.
Although often perceived as being deep in south London, Elephant and Castle is further north than Victoria and closer to many of London’s key attractions such as the Houses of Parliament and London Eye than, for example, the West End.
The area lies within walking distance of central London’s economic, cultural and commercial centres. Elephant and Castle also occupies a key position within Southwark and has the potential to become the borough’s flagship location.
Its accessibility, proximity to the city, extensive public ownership of land and diverse population all provide a powerful base for regeneration.