Planning for protest | Things we could learn from #15M in Madrid 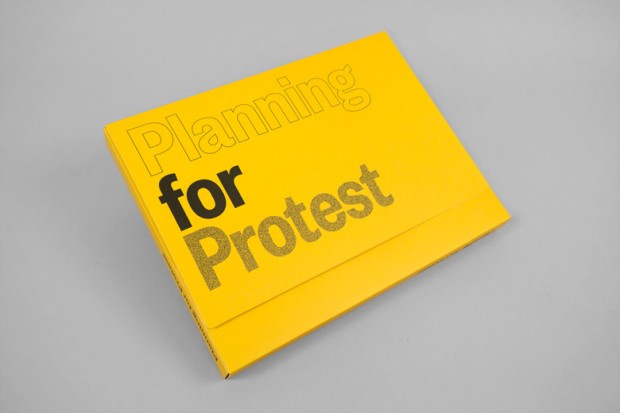 As we told you in a previous post, last year we were invited to join an exhibition and publication called Planning for protest. Among 11 other architectural offices in different cities across the globe, the people from Project Projects invited us to examine the role of architecture in shaping, defining, or limiting the flow of protest within our respective cities. 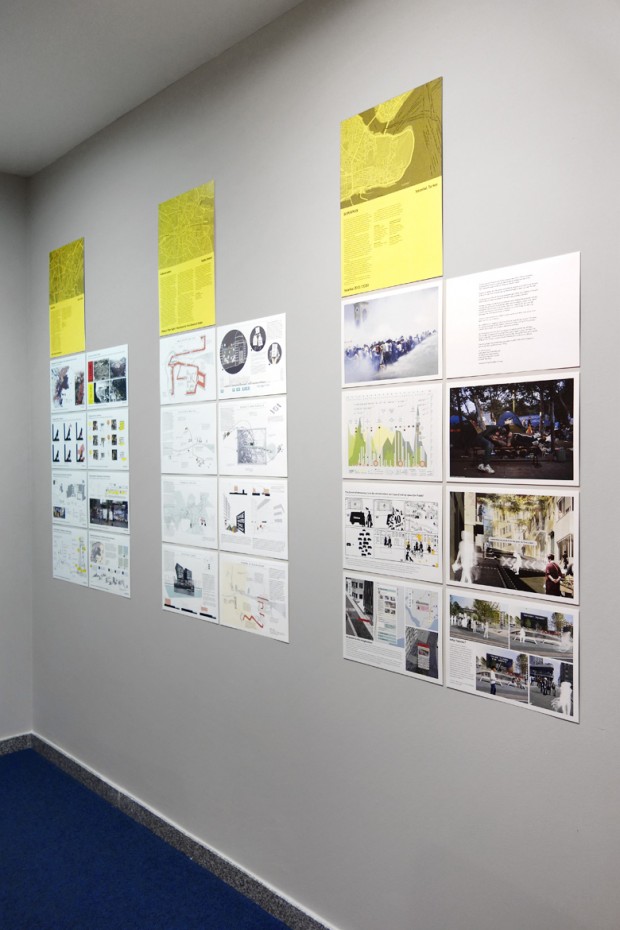 A view of the Planning for Protest exhibition

Each office was asked to render eight drawings exploring a proposal for their city, focused on a specific intervention or urban planning scale. Planning for Protest was intented to be an ongoing documentation of how the physical world around us both limits and can be transcended by the people at any given time. 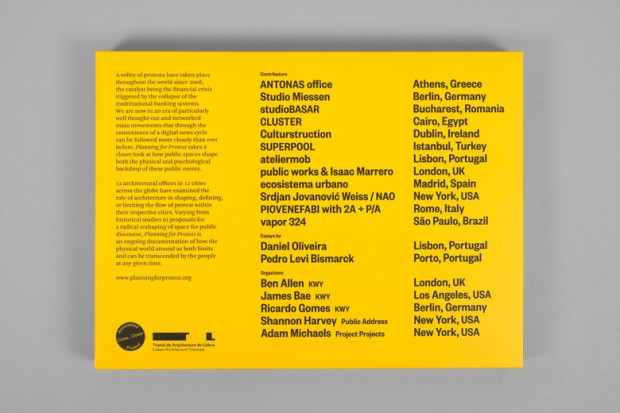 What could we do about that topic? How could we approach the bold task of planning for protest, specially in a city like Madrid, which has been one of the most active and creative nodes in the last waves of protests in Europe?

We decided that, rather than “How can we plan the city to allow protest?” we wanted to pose a preemptive question: “How is protest being made possible in today’s cities?”

Following the 15M movement in Madrid, we thought that studying the different documents developed during the protests by citizens and collectives would help us better visualize and understand the intense activity of those days, and the power of planning… and the unplanned. 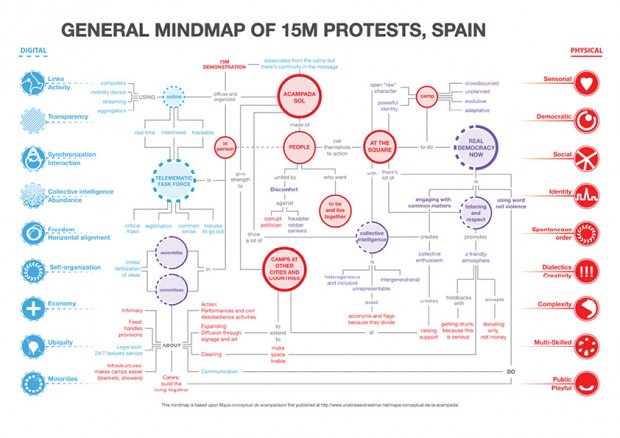 The graphics we gathered are different interpretations showing how these actions changed our perception and understanding of the main public spaces of Madrid. We also wanted to show how the Internet played a key role in these protests, sharing the focus between physical plazas and digital infrastructure. We took a closer look at how the current attributes of both physical space and digital environment were given a connected value, and how both of these spheres are seemingly interwoven, influencing each other.

We gathered the different documents around several topics and tinted them in colors ranging from red (physical) to blue (digital) in order to visually show the hybrid character of these protests and of everything that made them possible.

The first reflection is about how public spaces in Madrid were able to host the protests and let them evolve in time. Even if not designed for that purpose, the powerful identity and open, “raw” character of spaces like Puerta del Sol square allowed for unplanned, evolutive, adaptative, and crowdsourced infrastructures to appear. Other attributes that contribute to make physical urban spaces the best place for protest are: sensorial, democratic, social, spontaneous, dialectical, complex, polyvalent, and playful. 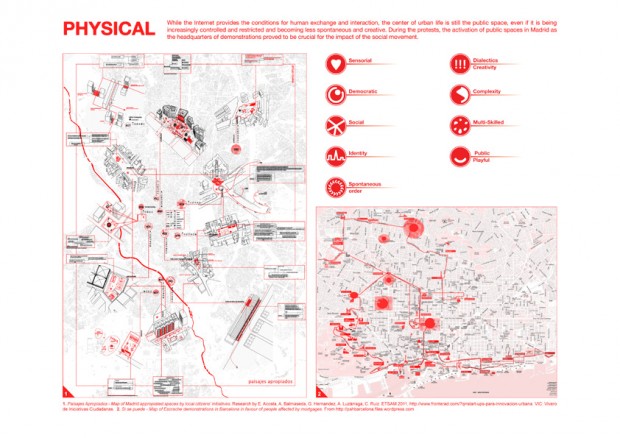 Planning for Protest Madrid – The physical

The second part of the picture is understanding the behaviour of the movement in the digital realm: mainly the Internet, with its specific features like its high speed of communication —even real time in some channels— and its almost ubiquitous character and interlinked relations, which stimulate the appearance of collective intelligence.

This resulted in the perception of a surrounding crowd with a common sense, with similar values and purpose, making possible a critical mass and a sense of legitimation —even an empowered impulse to go out and join the demonstrations and the campsites. The traceability of digital media leaves us with a “digital trail” of data that takes many different analyses and interpretations possible; conversely, it also leaves us with lots of broken links and data that will never be recovered. 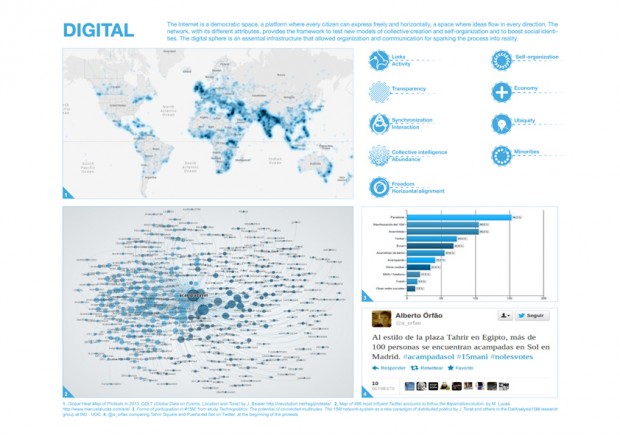 Planning for Protest Madrid – The digital

An amalgam of physical-digital: It is in the convergence of both physical and digital where the greatest opportunities came from for the movement to thrive. On the last five panels, we grouped evidence around five different topics:

As A. Corsín and A. Estalella describe it1: “The methodology of the assembly includes a sociology of roles, a praxis for conviviality, and a spatial and cultural layout. Assembling is hard work; it is also hardware. An Infrastructures Commission takes responsibility for keeping and maintaining the necessary materials and equipment to be used in the assembly.” The assembly form depends on these materials. Thus, objects and devices such as audio systems, megaphones, long cable-extensions, or, simply, placards, highlighters, and markers, become crucial infrastructural equipment for an assembly’s happening. 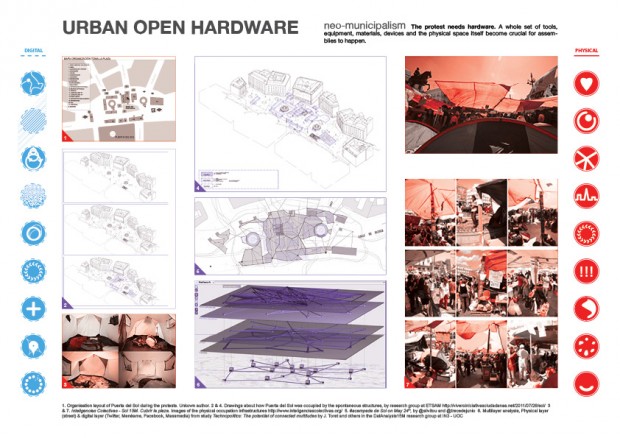 Augmented events, broadcasted through video streaming, with many more people attending than would be possible in a physical square. The beginning of distributed politics, coming from an increased self-awareness of society. Real time social media —beating the filtered and “delayed” traditional media. Extremely quick reactions onsite, triggered by online information: moving from one square to the other, (dis)assembling the campsites, avoiding certain streets or police lines. Spreading the movement to other cities and back, with very fast long-distance connections. 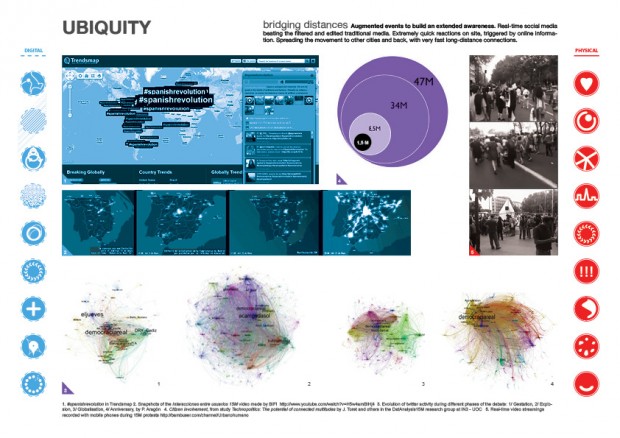 Communication and language for protest —building a common sense

Common values and principles bring about a new common language. In physical assemblies, certain gestures are adopted to make mass communication easier. In social media, hashtags and keywords are adopted according to current and trending topics. A defining characteristic of the 15M movement is the importance given to “consensus” as a decision-making mechanism that relies heavily on communication. The “digital trail” allows analysis of the evolution of the language, tracking keywords, and even emotions. 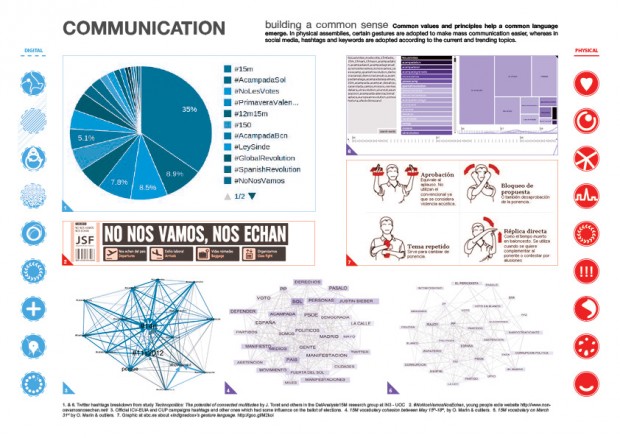 Massive protest movements require an incredible amount of self-organization: organizing the campsite and demonstrations on-site with required safety and salubrity; calling for participation in events with different formats; deciding the best place or route for gathering depending on police presence and other factors; taking collective decisions about the movement itself. 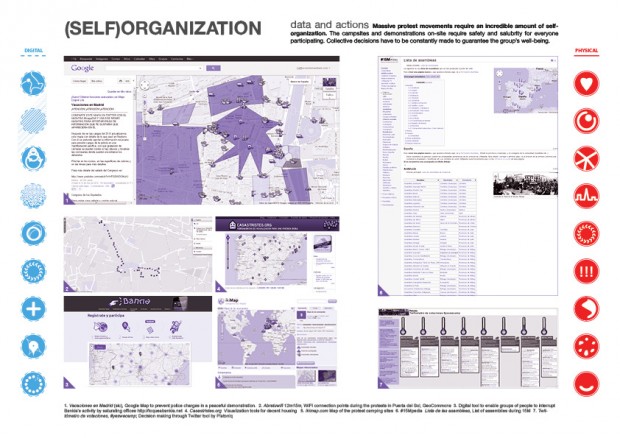 From the very beginning, the historical feeling of the movement made people aware of the importance of documenting it for the future. A physical archive was started in order to keep fliers, banners, and other materials, but the most comprehensive collection is kept online, where contents are easy to search, copy, reuse, and link. The Internet, on the other hand, is not very reliable in terms of storage: the term “data thanatology” comes to mind when looking at broken links, deleted tweets, or missing images. There’s also a question of digital autonomy: is there public space in the Internet? 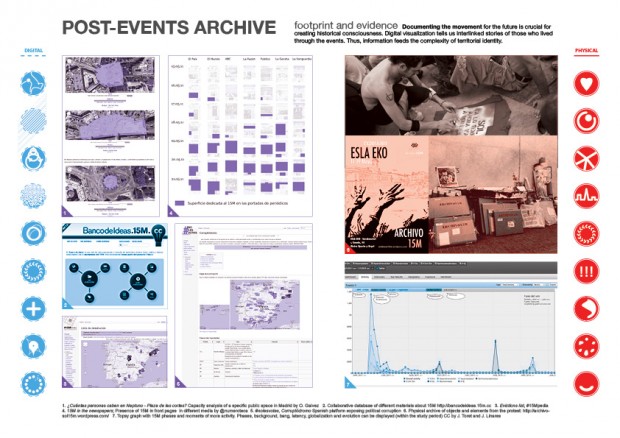 This is a compilaton by ecosistema urbano, featuring contents made by many different people. The resulting document (which can be viewed here as a PDF) is under a CC-BY license, but different and more restrictive licenses may still apply to each of the particular contents.

Along with the selection of the resources, many of them scattered along the Internet and available in very low resolutions, we faced another challenge: how to track the authorship and respect the attribution and the different licenses under which the different documents had been made publicly available. We hope everyone involved feels represented in the credits (included as footnotes on each page), and we thank everyone who helped us getting to the right people, understanding the documents and, in some cases, gaining access to the originals.

If you are interested in this topic, we recommend you to get the publication, made as a series of cards from the exhibition, and support this great non-profit effort. 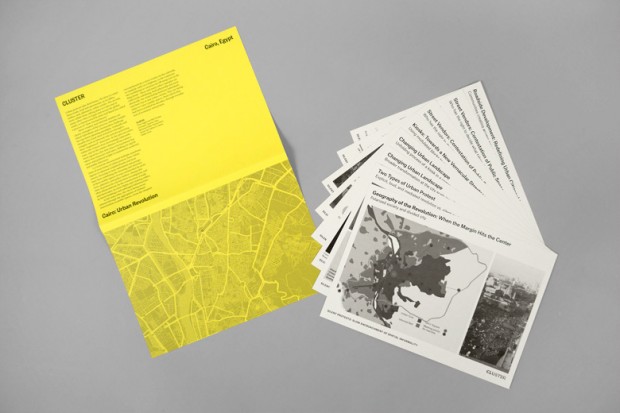 Planning for Protest by Project Projects –  cards from the publication

Get the book here!