#networkedurbanism: Your Digital Opinion is Important to us

Earlier this year we introduced to you #networkedurbanism, now that the “studio report” book is almost ready, we are publishing a series of posts showing some of the projects that the students have developed during the 2010, 2012, and 2013 studios at the GSD.

In this fifth #networkedurbanism post we present to you two projects that share the aim to enrich the physical space with a digital layer, the connection between real and virtual worlds was one of the recurrent themes in the studio and these two projects truly create a strong link between them allowing people to express their opinion about the physical city using digital means.

Benjamin Scheerbarth, Scott Liang, and Thomas McCourt didn’t even know each other before the #networkedurbanism studio, now they have made a startup out of their project, involving two full-time software developers, and their expectations about future developments are really exciting. Place Pixel draws inspiration both from the situationists theories, the dérive, and the need for subjectivity in imaging and knowing the city; and from the smart city paradigm that seeks to revolutionize the way we collect, quantify, and analyze data about the city, allowing for a depth of insight and degree of responsiveness that would have seemed impossible just a few years ago. How can we systematically collect and analyze the subjective impressions and emotive responses to the built environment? Place Pixel is a web-based app that explores the human layer of the city: the entire city is divided into a geo-referenced grid, each cell of the grid—a pixel—takes a vote at the press of a button, the vote may contain a comment and might concern a specific aspect of urban life.

The application then renders the collected data—the layer of likeability—in a form that is thoroughly compatible with the wealth of objective information that smart cities already collect. Their idea is that: “users can see real-time urban conditions around them, from popular places to more ephemeral phenomena such as festivals or demonstrations. Through following thematic pioneers, one can chase street art, dog-friendly places downtown, specialty shopping, or create a follower base oneself.” The resulting matrix of data can be used in many ways, once integrated with other objective data and tied to real time and space, it can be useful to explore and to understand the city in a deeper way, “planners and designers can explore the complex systems of interactions within the city in entirely new ways, gaining unprecedented insight into what really creates the good in a city.” 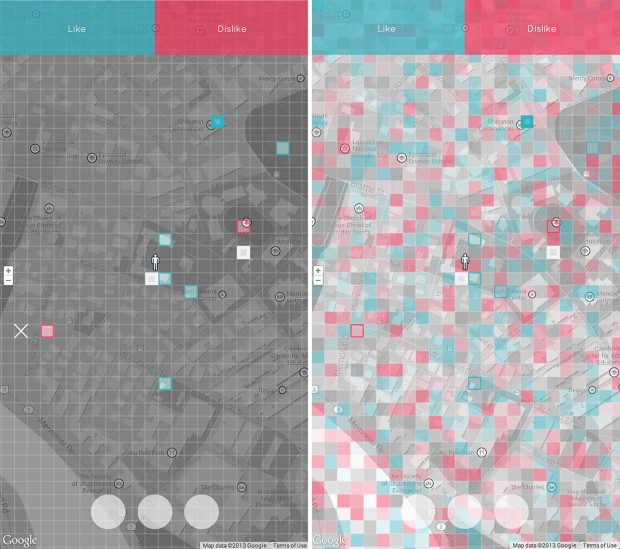 Screenshots of a prototype

New videos and animations can be found here, on their official website, and on #networkedurbanism, Place Pixel has been developed with the MIT, the MIT SENSEable city lab, and the Northeastern University, it was the basis for a winning proposal at the ABX2013, it is now being developed at the Harvard Innovation Lab, and was selected for the 2013 Harvard President’s Challenge.

Robert Pietrusko’s research is about the role of contemporary public space, in the past, squares and streets have been the places where popular opinions were expressed, nowadays “the representation of community is often constructed from afar, with little involvement from the public body, in the form of statistics.” His idea is to reassert the role of public space and people in the creation of the statistics and the demographics by “changing the scale and aesthetic of gathering public opinion.”

“In the New Statistical Commons, subway turnstiles are playfully turned into an interactive surveying tool, where individuals can pose questions to their neighbors, with real-time feedback and likewise construct statistical narratives,” in this way the public space is reenergized as a venue for collective analysis, results are immediately visualized “in a narrative fashion that cause inhabitants to reflect on their condition and their community.” The device was installed at the GSD using the entrance double doors as turnstiles and, using a small test population, it demonstrated the validity of the concepts it is based on: “the tool generates narratives from simple yes or no questions, draws in additional data feeds for richer stories and lets the student body pose questions to their peers through an e-mail interface—ultimately receiving their results back in the form of a simple report.”