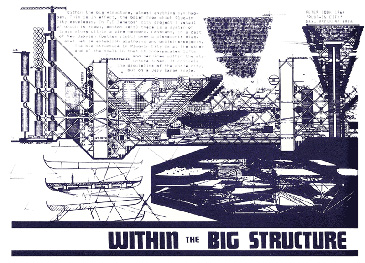 Archigram’s Plug-in City, Constant Nieuwenhuys’ New Babylon and Yona Friedman’s La Ville spatiale rank among the incunabula of the 1960s. Combining visionary architecture, pop culture, art, and situationist rebellion, they became known far beyond the narrow confines of urban planning. Till now, however, there has been no exhibition dealing explicitly with megastructuralists’ vision.

MEGASTRUCTURE RELOADED seeks for the first time to show them in context. Aside from Archigram, Constant, Friedman, the radical Florence groups Superstudio and Archizoom, whose designs at the end of the 1960s constituted an ironic response to the megastructuralists, will be included. The exhibition is not intended as a documentary representation; instead the megastructuralists are to be tested for their currency and relevance for the problems of contemporary urban design and mega cities. We will focus on the connection between architecture and visual art, as well as on actual architectonic and urban-design issues.

MEGASTRUCTURE RELOADED continues the long-term research and exhibition project Utopia Revisited, which includes workshops, symposia, publications and exhibitions throughout Europe. The project started last year with the exhibition Ideal City – Invisible Cities encompassing works by 40 international artists in public places and several institutions in Zamosc, Poland and Potsdam, Germany (June – October 2006, curated by Sabrina van der Ley & Markus Richter). The project will be continued with the exhibitions Things to Come, focusing on visual arts and science fiction (curator: Doreet Harten) in 2008 and Finis Terrae: The End of the World (curators: Sabrina van der Ley & Markus Richter) in 2009. Utopia Revisited will conclude with the exhibition Arcadia in 2010.