The Febres Cordero building was developed within the scope of CUENCA RED, the urban reactivation strategy for Cuenca, Ecuador. The aim of Cuenca Red was to incorporate activities and programs in the Historic Center in order to create a new network of reactivated public spaces. One of those spaces is Febres Cordero, an emblematic and historical building which had functioned as a school for decades.

This building has great heritage value and has one of the largest courtyards of the entire historic center (3,300 m2). It is located on Gran Colombia Street, right next to the tram line. It is comprised of two main volumes, one of them  with much less quality and architectural interest.

The building was going to stop its activities within a few months of the beginning of the project, as the school was going to be relocated into a new building. Also, the school has been an important node of social and economic activity for years on the area. This large community injects daily activity into the center of Cuenca. 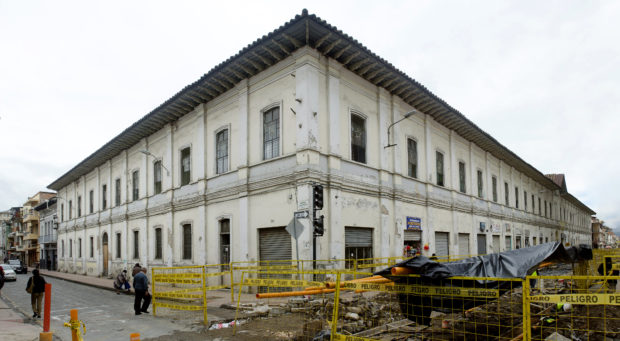 Activity from the beginning

One key aspect of the project was not only to design a building with new uses and programs, but also to plan the transition process between one moment and the other. We conceived the project from its Phase 0, in order to unleash, through different actions and activities, dynamism and interest in the future of the building and its interior space.

Space is activated from the beginning, dividing the construction into 3 phasesThe project is planned in 3 phases. The first one is really important, consisting of the opening and reactivation of the central courtyard as a public space for events and activities. This phase is esentially low cost, but its implementation will have a strong impact in keeping momentum and activity around the area, and also generating interest and expectations around the building. Subsequently, the reconditioning and construction of the building will be carried out, and finally the climatic conditioning of the new interior square.

In search of new uses

Following our conclusions of the urban analysis, we noted the progressive emptying of housing in the Historic Center of Cuenca. Although the center still continues to be an active space for tourism and commercial activity, the number of residents is decreasing, moving towards the perimeter of the city center.

This is certainly a problem, especially in the afternoon or the evening, when the shops and offices close, and the lack of activity and people in the area becomes more evident. That emptiness generates unfavorable conditions, like sense of insecurity, or an increase in the number of abandoned or underused properties.

Current status of the interior patio of the Febres Cordero School in Cuenca, Ecuador.In this complex context we identified, through a participatory process partly hosted in the school itself, the need of strengthening the resident population living in the center of Cuenca. It was also key to generate conditions for other families to consider attractive and feasible to live there. The inhabitants of the CHC and technicians who participated in the participatory process agree that the building has optimal conditions to become a new “catalyst” of the city. The Febres Cordero building can be reconstructed as a pilot project that will address many of the opportunities and challenges shared with other historic centers in Latin America.

Febres Cordero does not only house a school, but also commercial premises along the ground floor. The project aims to enhance this aspect, creating a hybrid building capable of bringing together different programs, generating a diverse community that serves as a reference for social and economically sustainable urban intervention.

The rehabilitation of the Febres School seeks three main goals, as steps towards the improvement of the Historic Center:

Hybrid program of the new complex

The new building is connected to the heritage building by corridors

The courtyard is conceived as a new public square for the city. It recovers the entrances from the 3 adjacent roads and generates an active and attractive, programmable public space. The ground floor will be adapted to reinforce this idea, promoting permeability and the visual connection between the streets and the courtyard.

New public square, with 3 entrances from the surrounding streets

The proposed square includes two conditions: a flexible space with a mobile grandstand that allows the creation of different configurations for cultural and sport events, and a more natural space, a cuencan garden inspired by the multiple existing green patios that together create a network of vegetation and biodiversity in the historic center. 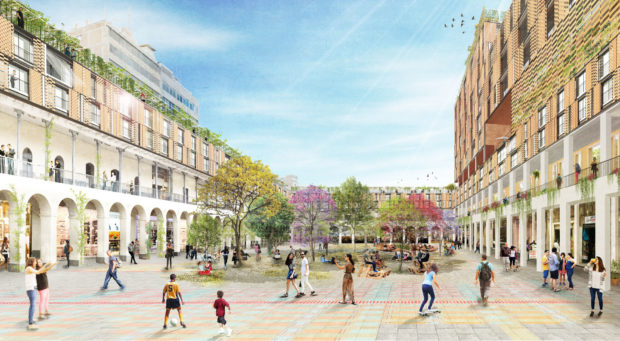 We are aware of the historical value of a building like this. After a careful study of the history, typology, and construction of the building (built around 1900), the intervention was designed to preserve and respect its historical value and at the same time to introduce new structures to diversify the possibilities of use and adapt it to the evolving urban context.

The intervention respects and seeks to value the intrinsic qualities of the building, and also wants to create a dialogue with the most innovative construction techniques. 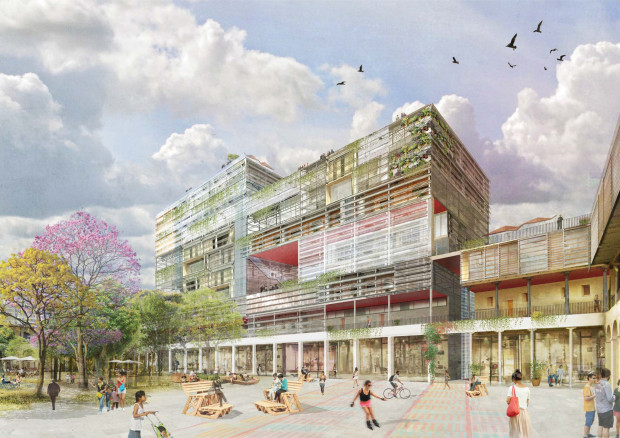 View of the new public space with the mixed-use building connected to the old Febres Cordero School. 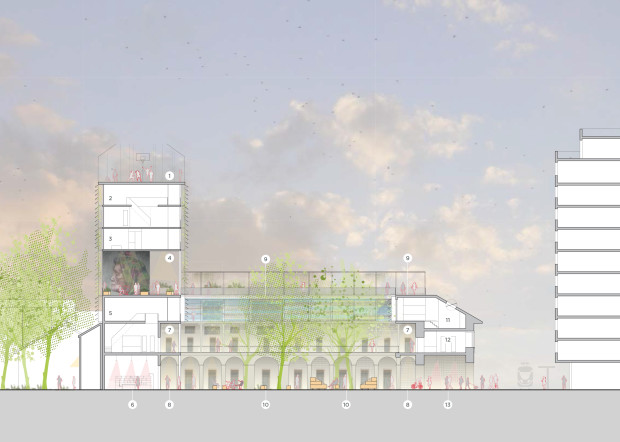 Cross section. A relationship between the new mixed building (left), the public square (center), and the heritage building (center and right).

Architectural plans of the refurbished complex.The main strategy consists of concentrating the utilities or technical systems of the apartments in spines perpendicular to the façade line. This way we can  to minimize the impact on the façade and generate cross ventilation in all the rooms. The exterior façade is not altered by any of the interior interventions and will preserve its current structure and image towards.

On the other hand, the roof was in poor condition. Activating the space under the roof with the creation of a new housing ring towards the interior of the patio enabled us to expand the useful surface without impacting the building on its exterior appearance and its relationship with the public road.

In a project as ambitious as Febres Cordero, the most appropriate technical mechanisms must be sought to achieve maximum economic, social and environmental sustainability. The final design and construction systems were devised under the following sustainability criteria: following bioclimatic design principles for better energy efficiency, adopting local materials and construction techniques to improve durability, and considering the economic impact of the construction at a local level.

Adaptation of housing typologies to the structural modules in the heritage building. 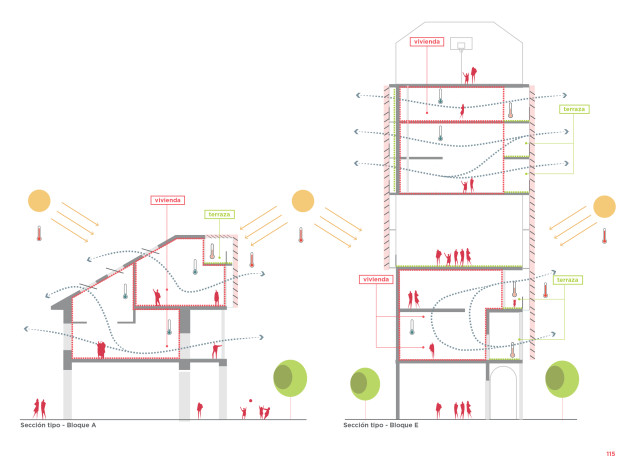 Basic outline of the bioclimatic behavior.

The rehabilitation of Febres Cordero is also conceived to be financially sustainable, allowing a short-term return of the investment with the sale and lease of housing and commercial premises, and with the generation of new economies in the urban area.

In general, this rehabilitation project, a pilot within the general Cuenca Red plan, will increase the intensity of use, the possibilities of social interaction and the generation of economies that contribute to the long-term sustainability of the historic center.

You can see the full documents of this project in our portfolio.