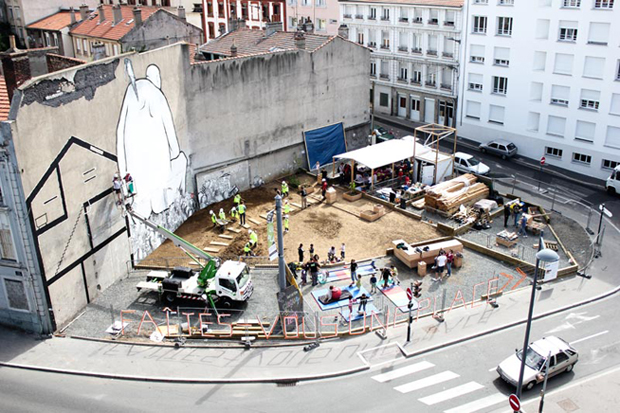 Place au Changement is a co-constructed square and a placemaking process conducted by collectif etc, to create the Giant’s square, a self-managed temporary public space in Saint-Etienne.

Saint Etienne, Châteaucreux. Since 2008, the district entered a long-term process of urban transformation, a process of destruction, reconstruction, renovation, a process where different mutation stages and time-spaces side and cohabit, often leaving voids pending for weeks, months, sometimes years. And why not include these urban gaps in the process? Why not take advantage of change to colonize rather than procastrinate? Such were the questions carried out by the EPASE (Etablissement Public d’Aménagement de Saint Etienne) when announcing the competition “Défrichez-la” – literally suggesting “Clear it” – to temporarily occupy plot 58, at the crossroads of Ferdinand and Cugnot streets.

Place au changement was collectif etc’s response, to design both a square and a participation process. The name itself plays on two layered meanings: the square Of change and the process to Give way to change. The first intention, to reflect the on-going mutations in the neighborhood and remind the square’s temporary condition, was to design the square as a transitional step of its future outcome: on the ground, the imaginary plan of a future apartments building meant to replace plot 58, and on the surrounding wall, its corresponding section. And second, to design a process involving the citizens both in building the proper square and its identity as a public space.

“Make yourself a square !”. The familiar DIY tag line came out as a call for participation while launching the communication warm-up strategy, first step to pave the way for the upcoming event. Following their success in March 2011, collectif etc, along with two graphists – Bérangère Magaud and Léatitia Cordier – initiated the process by making public presentations of the project in local council assemblies, organizing meetings with the concerned political actors, contacting local associations, social centers and foster cares, negotiating with different city services the maintenance of the building site and its subsequent public space, and opening a blog to keep daily track of the project’s evolution, in order to spread the news in the greatest number of circles. 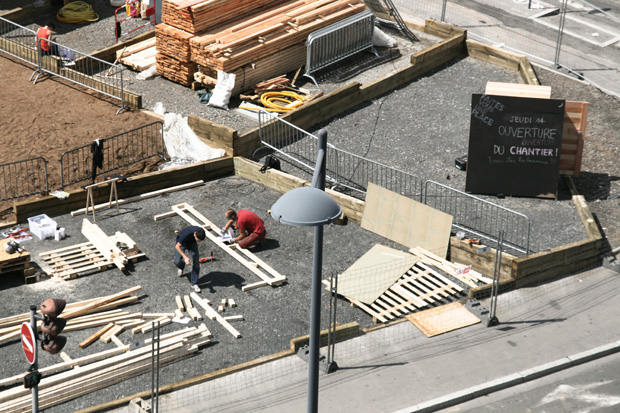 On 14 July, the building site opened to public participation. To involve the local inhabitants in the construction process, the work was organised in three thematic workshops, aiming to target people according to their own field of interest, capacities and knowledge.

The wall painting workshop, to dress the painted cross-section and bordering fronts with real scale drawings of daily objects, mainly involved the children of the Soleil and Cret de Roch neighborhood houses. The nationally renown street-artists Ella & Pitr also made a punctual intervention to paint the huge Giant, which later inspired the square’s actual name, and allowed to arouse national interest and local pride, while valuing the children’s work alongside. 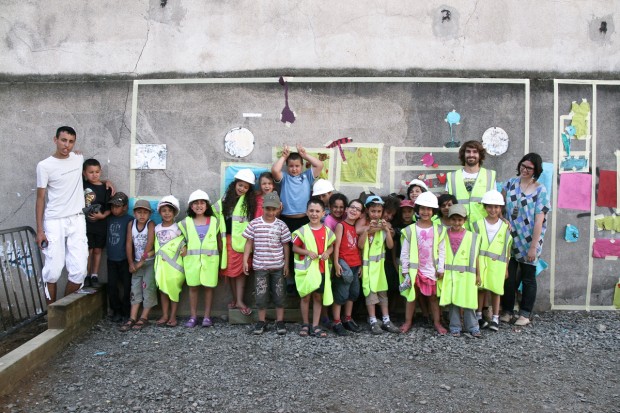 The gardening workshop, to design and plant the green spaces of the square, spontaneously involved neighbors in the long-term. People voluntarily brought plants and tools from their own homes, and shared their knowledge, from which the collective had usually a lot to learn. On the last day, the group built a shelter to keep the tools and a 1000L water tank which was agreed to be regularly filled by the local city service. 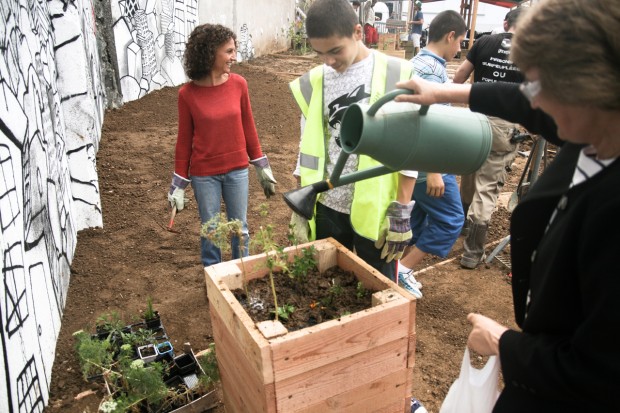 The carpentry workshop, to make the square’s framework and furniture, involved any handy volunteer in the construction of the preconceived designs. A member of the collective along with a neighbor who was spontaneously designated foreman by the team, were in charge of driving and supervising the workshop, and helping people with the tools at the participants’ disposal. 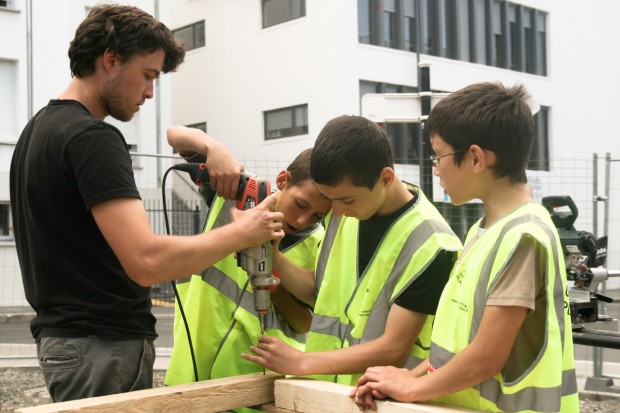 Place au Changement proposed to use not only the building site as a public space, but also the building period to schedule on-site events. A building site is an event as such : closed streets, constant noise, and permanent activity. Yet, whereas we tend to call it nuisance, Place au Changement’s constant occupation was other: free and collective meals, tournaments, concerts, activities, performances, meetings…

During three weeks, what was formerly a wasteland became a daily attraction. Every Fridays announced a collective dinner, prepared by the women of the Dames de Côte-Chaude ONG, which gathered up to 80 people around a couscous, tajine and paella. Saturday nights held open concerts, which drew a miscellaneous public around improvised barbecues and cheap drinks. 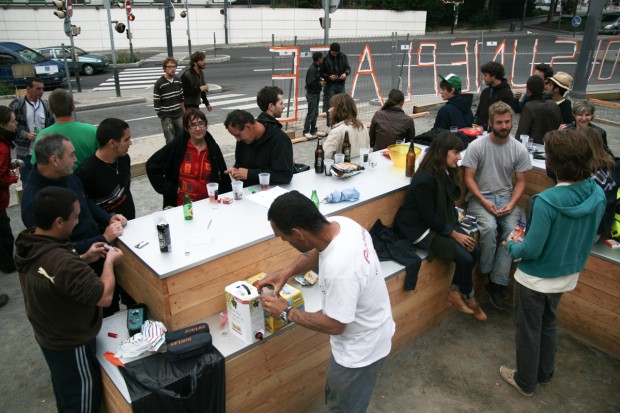 Sundays gave out out-door movie projections, that welcomed students of the Gobelins to release their own short films. Associations such as Feedback association, who coordinated a circus introduction workshop, and El Caminito who offered tango lessons, made punctual on-site interventions to incite more people to join the process.

Two round-table discussions around the citizen as an actor of public space were also held, as times of reflection and debate with local associations, authorities and professionals, aiming to claim for a more horizontal cooperation and direct communication between the citizens, actors and administrations in projects of urban and public nature. 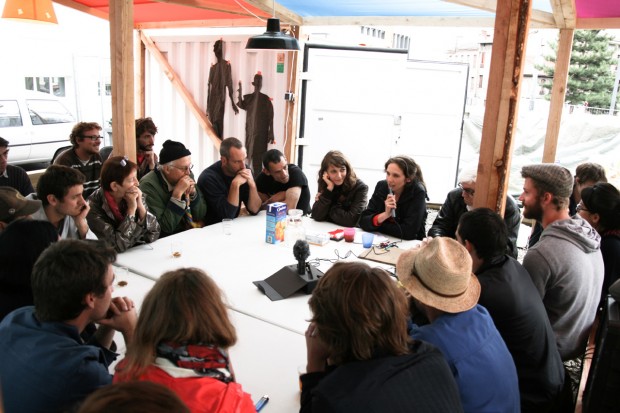 On 1 August, the construction site ended in a closing event, marking a new step in the process, the opening of a public space in the neighborhood. To promote the citizens’ involvement, the most active participants had their name carved on a pole on-site, a poster was put up to explain the process, again naming all the stakeholders, and a booklet summarizing the project and three weeks of building and lucrative site was given out to the public. A public vote by show of hands, undertaken by the citizens, renamed the space Giant’s square, after Ella & Pitr‘s huge painting on the bordering wall.

The day ended by a closing concert and jam session, and a silent commitment not to lose what had been raised during the past weeks. For beyond an architectural design and a square, Place au Changement built a self-managed community, and stirred up an activity of spontaneous uses – to be continued. 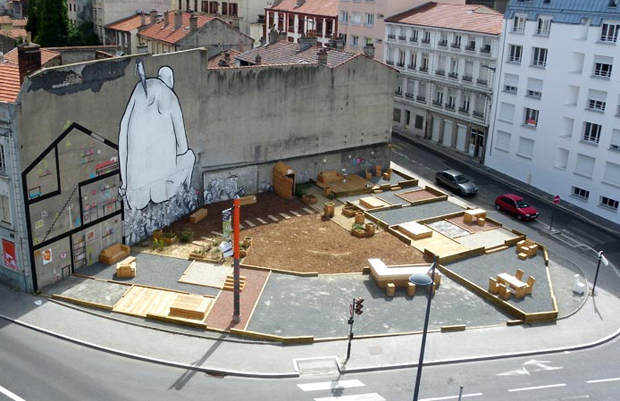