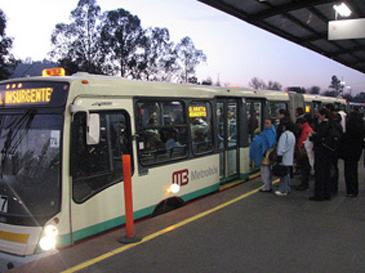 What’s the smarter solution for bringing mobility to 21st century cities: bus rapid transit (BRT) or light rail? With questions this big, it’s important to consider all the perspectives.

A team of researchers at the World Resources Institute (WRI) recently produced a report that goes against the grain. WRI analyzed and compared BRT and light rail as two options for Maryland’s Purple Line Project, a 16-mile transit corridor that will connect the D.C. suburbs. In January, the Institute came down in favor of BRT, with a statement announcing that “enhanced buses … would cost less, offer similar services, and fight global warming better than light-rail cars.”

Our main question related not to what’s in the study, but rather, what seems to be left out. It’s a common observation that light rail delivers benefit beyond transit alone, in the form of transit-oriented development that springs up as a result of developers, business owners and homebuyers seeking proximity to the train stations.

The team at WRI was happy to share their take on this and other issues. I interviewed the study’s lead author, Greg Fuhs, and WRI’s senior transport engineer Dario Hidalgo, about BRT/LRT, transit prejudices, and how other cities can apply this analysis to their own planning process.

Julia Levitt: In your study, you found that BRT outperformed light rail in cutting overall CO2 emissions. How did you come to that conclusion?

Greg Fuhs: Our study actually corroborates what is already stated in the Maryland Transit Administration’s Draft Environmental Impact Statement (DEIS): that BRT would be better on CO2 emissions for the Purple Line. This is a surprising finding to many, because it is often assumed that switching to an electric system such as light rail would reduce CO2 emissions. However, it is very important to consider the electricity source, and in our region the dominant source is currently coal-fired power plants.

So, while energy consumption from roadways would decrease with introduction of either light rail or BRT, for light rail the resulting emissions reduction is not enough to counterbalance the effect caused by the high electricity CO2 emission factor. In fact, CO2 emissions are projected to increase from business as usual with a light rail Purple Line. While this could change in the future with a major and permanent shift to low-carbon energy sources, for the foreseeable future we would likely continue to see higher CO2 emissions from light rail in this case.

JL: Critics of your report have pointed out that in North America, many people own cars, which gives them a choice that many riders overseas don’t have, and that people who have the choice of driving a personal vehicle are often inclined to find light rail cars an acceptable alternative, but are less likely to ride buses. What’s your take on this argument?

Dario Hidalgo: It is a common perception that a light rail system would attract more riders than BRT, and that is reflected in the demand estimations incorporated in the DEIS. However, I would raise two points:

First, in this case it is not at all certain that there would be a large enough increase in ridership to justify the significantly higher cost of light rail. For example, if we take just MTA’s ridership estimates, for the “Medium Investment” LRT and BRT alternatives we see a projection of 62,600 and 51,800 riders per day, respectively. That’s only about 20% more riders for light rail, yet the projected capital cost of the light rail system is more than twice that of BRT ($1.2 billion vs. $579 million), and also includes higher annual operation and maintenance costs.

Second, it is worth drawing a distinction between “buses” and “BRT.” The concept of bus rapid transit is not well understood in the United States, where there are only a few systems currently in operation. In reality, BRT would be designed more like a light rail than a standard bus system, with features like dedicated lanes, signal priority, pre-pay boarding, elevated station platforms, and efficient and comfortable vehicles that make it much more efficient and appealing than a traditional bus service. For the Purple Line, BRT would also offer travel times that are competitive with light rail. With a well-designed, well-operated, and well-advertised BRT in place, there is good reason to believe that many people would use and appreciate the system.

JL: Although your report shows that BRT will cost about half the amount of a light rail system, other studies show that light rail systems, because they are permanent structures, do more to encourage transit-oriented development. Was TOD a factor in the EMBARQ study? Do you think that BRT can facilitate and encourage dense development at a similar level?

GF: We did not look specifically at the TOD factor in our study. However, one cannot assume that transit-oriented development would be sparked by light rail but not BRT. For example, a recent study by the American Public Transportation Association looking at this issue considers both rail and traditional bus systems (although unfortunately it does not look at BRT specifically), and indicates that both can lead to significant positive land use changes. In any case, there is no reason to assume that LRT has a greater impact on land use than high-quality BRT if the systems provide similar travel times, capacities, and overall quality of service, as would be the case for the Purple Line. Moreover, developers can benefit from the shorter implementation time that BRT projects bring as compared to LRT.

DH: Also, regarding permanence, this is a somewhat relative concept. For example, there were thousands of miles of tram networks in the U.S. by 1940; much of this system was dismantled before 1970 with the rise of the automobile and suburbia. The forces behind development are not limited to the technology of transit vehicles, but also depend on factors such as accessibility, enabling policies, and background economics.

JL: Do you feel that the EMBARQ study comparing BRT/LRT can be easily applied to other regions and cities, or is this evaluation case-specific? What factors do you suggest other cities consider as top priorities when making their own decisions about public transportation?

GF: While certain general principles may apply to multiple locations (e.g., public transit is generally an asset to the community and its development should be encouraged), in reality every evaluation like this must be case-specific. After all, even if different locations have similar demographic and/or geographic characteristics, every local population has different needs and preferences and faces unique transportation challenges and political circumstances.

In considering public transportation projects, the first priority must be to determine if there is a need for a transit system to move people within the proposed corridor, and the entire decisionmaking process should be conducted in close consultation with the affected communities. Other important considerations include determining how much benefit a transit system could bring in terms of improved mobility, greater access to transport, incentives for economic development, and improved environmental quality. Further, and particularly in these lean economic times, the cost-effectiveness of the proposed system is a critical factor (especially in terms of competing for scarce state and federal funding). There is also evidence that urban infrastructure projects entail high risk of not meeting preliminary demand and cost estimates, and thus not realizing the projected cost-effectiveness. Such risks should be considered in the analysis and decision making process, but so far this has not been the case for the Purple Line project. Our study does attempt to quantify this risk by providing a sensitivity analysis of Purple Line cost and ridership projections, and we recommend that similar efforts be undertaken in future transit proposals.

In our study specifically, we emphasize that in this time of financial and climate crisis, cost-effectiveness, risk, and greenhouse gas emissions are especially important factors to consider. And in these three cases, BRT comes out as the better option for the Purple Line, as can be the case in other projects. Going forward, we would encourage decision makers and communities not to select a project based on perceptions, but on good analytics.