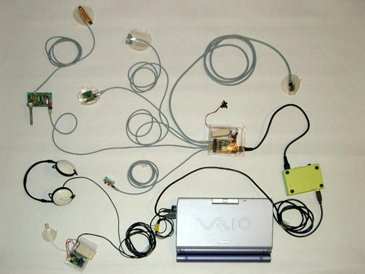 Nocturnal dub ambiances, pollution as echo chambers, drumming traffic noises, singing street lights… Scratching tramway bells by approaching walls, grabbing metallic railing as guitar strings, turning corners towards a chorus… Music creation with Sonic City is a co-production of user actions and urban conditions. It is experienced as a dynamic improvisation in context and continual rediscovery of everyday urban settings. Encounters, events, architecture, (mis)behaviours… all affect the music and become means of interacting with or ‘playing the city’.
In this project, we break out of traditional contexts for music creation to explore the creative potential within our local surroundings and mundane activities. Our intention is to expand the space of personal music creation by including mobile behaviours and large-scale spatial movement through urban landscapes as parameters in the electronic music composition. This opens new possibilities for individual creativity integrated into everyday life. Wearing Sonic City, anyone can experience a simple walk down the street as an expressive act, a path through the city as a personal composition. As a complement to lived urban experience, the resulting music is a new, intimate soundscape intended to enhance perception and encourage new uses of the urban landscape.

* the city as interface

We are projecting a space of music interaction onto the physical space of the city, a constructed yet inhabited environment, made of unknown and familiar places, details and ambiences, unexpected and predictable events, fixed and fluid elements. The urban environment becomes an interface for real-time electronic music making, and urban paths become the scores of a personal soundscape of music, in which changes of context imply changes of musical structure. As a result, the city is both a setting and a means of music creation. Context parameters and urban sounds are necessary inputs to the system: the city not only enables the user to interface with and control the music, but music creation cannot happen without the city. Thus, using Sonic City is a completely contextual form of aesthetic practice.

The project takes on the challenge of ubiquitous computing in the context of interactive music: spreading and intergrating computation into the environment in order to enable people to move around and interact with computers more naturally than they currently do and achieve invisibility in use and embodied interaction. “The most profound technologies are those that disappear. They weave themselves into the fabric of everyday life until they are indistinguishable from it.” (Weiser)

As a new platform for personal expression and urban experience, Sonic City explores public space as a site for private performances and emerging behaviours.

A person’s mobility through the shifting urban contexts of a city can be seen as a musical gesture extended geographically and over time. This is exemplified in the simple act of walking through the city as a sequence of contexts experienced over time and shaped by dynamic urban conditions and personal choices of route. Reinterpreting the concept of gestural musical interaction from interactive music and dance technology, we consider the act of walking as a deliberate and creative action, and model the movement of a pedestrian through the surrounding environment with a combination of gesture-based interaction and context-awareness.

* inspiration and related work
Initial inspiration came from related projects in the fields of ubiquitous computing (e.g. Redström‘s ‘Dish Jockey‘), and of interactive dance and music (e.g. NIME, dance-technology.org), from previous works of project team members (e.g. Mazé’s ‘Nomadic Audio’) as well as from creative urban practices (e.g. skateboarding, parkour, the Situationist ‘dérive‘) and personal interests for urban exploration… but mostly from the realisation that we often walk around with music in the head, that we mentally synchronise with our steps. This lead to thinking about walking as a musical gesture (the same way dance movement produce music in interactive dance technology), and about remixing urban sounds in real time based on where and how you walk and on what happens around you.

The project draws on related work in the fields of musical interfaces, interaction design, wearable and context-aware computing, and mobile applications. Other projects involving the city in interaction include the Equator project ‘Can You see Me Now?’, an urban mixed-reality game event, and Mott et al‘s ‘Sound Mapping‘, a site-specific outdoor interactive music event with portable sensor-based devices. The ‘Touring Machine’ (Columbia CGUI Lab) uses location-awareness to supplement real space with a virtual information overlay. Beloff et al‘s ‘Seven Mile Boots‘ geographically maps the internet space to the physical one, in which the user walks with special boots. PLAY‘s ‘Pirates!‘ uses proximity and location in real space as interaction elements in virtual game play. Dunne‘s ‘Noiseman’, Maebayashi‘s ‘Sonic Interface’ and Mazé’s ‘Nomadic Audio’ propose new interactions with urban sound: ‘Noiseman’ and ‘Sonic Interface’ filter and remix urban sounds on the move, and ‘Nomadic Audio’ creates a dynamic soundscape from local radio frequencies. ATR‘s’CosTune‘ and Atau Tanaka‘s ‘Malleable Mobile Music‘project enable networked music making in the city (‘CosTune’ as a wearable that can be explicitely played, ‘Malleable Mobile Music’ as a collaborative proximity and location-based music remixer). Other related projects include ATR‘s ‘Sensor-Doll‘, a context-aware music interface, Toshio Iwai’s Sound Lens, a portable device to convert light into sound, and Wodiczko‘s ‘Personal Instrument‘, the first wearable to manipulate sound.
Sonically, our project is greatly inspired by musique concrète, and glitch music. However, the music in Sonic City is directly linked to the physical location where it is being produced and heard, in context.

With its unique focus on using everyday settings and mobile interactions on the fly as creative resources and raw materials for personal expression, Sonic City lays the technological groundwork for innovative music creation and context-aware creative applications. It is a platform for investigating new forms of interactions that enhance everyday creativity, urban discovery and emerging sonic subcultures.