For a long time now I’ve been obsessed with suburban and exurban master-planned communities and how to make them better. But as the economy and the mortgage crisis just seem to get worse, and gas prices continue to plunge, the issues around housing have changed dramatically. The problem now isn’t really how to better design homes and communities, but rather what are we going to do with all the homes and communities we’re left with. 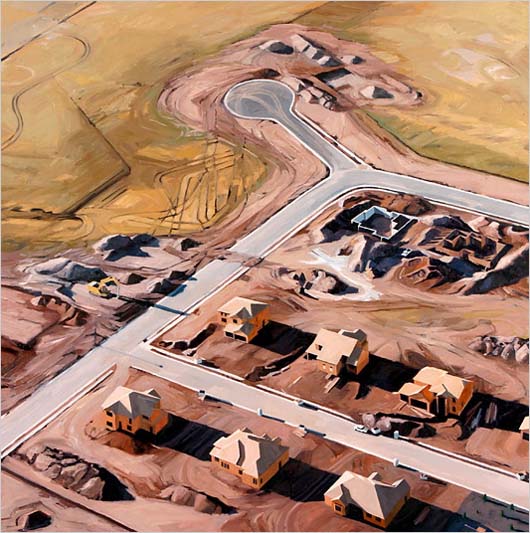 In urban areas, there’s rich precedent for the transformation or reuse of abandoned lots or buildings. Vacant lots have been converted into pocket parks, community gardens and pop-up stores (or they remain vacant, anxiously awaiting recovery and subsequent conversion into high-end office space condos). Old homes get divided into apartments, old factories into lofts, old warehouses into retail.

Projects like Manhattan’s High Line show that even derelict train tracks can be turned into something as valuable to citizens as a vibrant public park. A brownfield site in San Francisco has been cleaned up and will house an eco-literacy center for the city’s youth. Hey, even a dump (Fresh Kills, on Staten Island) is undergoing a remarkable metamorphosis into a recreation area.

But similar transformation within the carefully delineated form of a subdivision is not so simple. These insta-neighborhoods were not designed or built for flexibility or change.

So what to do with the abandoned houses, the houses that were never completed or the land that was razed for building and now sits empty? 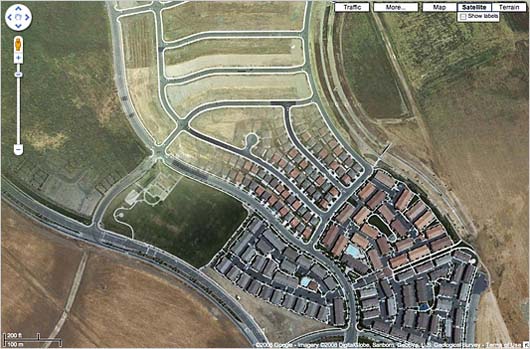 Take as an analogous example their symbiotic partner, the big box store. As I learned in artist Julia Christensen’s new book, “Big Box Reuse,” when a big box store like Wal-mart or Kmart outgrows its space, it is shut down. It is, apparently, cheaper to start from scratch than to close for renovation and expansion, let alone decide at the outset to design a store that can easily be expanded (or contracted, as the case may be).

So not only does a community get a newer, bigger big box, it is also left with quite an economic and environmental eyesore: a vacant shell of a retail operation, tons of wasted building material and a changed landscape that can’t be changed back.

The silver lining in Christensen’s study are the communities she’s discovered that have proactively addressed the massive empty shells they’ve been left with, turning structures of anywhere from 20,000 to 280,000 square feet into something useful: a charter school, a health center, a chapel, a library. (And, in Austin, Minn., a new Spam Museum.)

The repurposing of abandoned big-box stores is easier to wrap one’s head around: one can envision within a single volume (albeit a massive one) the potential to become something else.

But exurban communities are a unique challenge. The houses within them are big, but not generally as big as, say, Victorian mansions in San Francisco that can be subdivided into apartments. So they’re not great candidates for transformation into multi-family rental housing.

I did visit a housing development last year that offered “quartets,” McMansions subdivided into four units with four separate entrances. These promised potential buyers the status of a McMansion with the convenience of a condominium, but the concept felt like it was created more to preserve the property values of larger neighboring homes than to serve the needs of the community’s residents.

I don’t have the perfect solution for how to transform these broad swaths of subdivisions, and while I’ve heard much talk of the foreclosure tragedy, I’ve heard nary a peep about what to do about it.

A recent article in The Times spotted an emerging trend of kids usurping the abandoned pools of foreclosed homes for use as temporary skate parks. (Interestingly, this was big in the ‘70s, as you can see by watching the rad skate documentary “Dogtown and Z-Boys.”) It’s a great short-term strategy for adolescent recreation (and for ridding neighborhoods of fetid pools, which often harbor West Nile virus), though it’s not a comprehensive solution to the problem of increasingly abandoned, ill-maintained and more dangerous streetscapes.

But there are some interesting avenues to be pursued. Part of President-elect Obama’s proposed massive public works program, for example, is to be dedicated to clean tech infrastructure. Included in this is the intent to weatherize (that is, make energy-efficient) one million low-income homes a year.

One can already see how those in the construction industry can begin to make the shift from new construction to home retrofitting. It’s the centerpiece of “The Green Collar Economy: How One Solution Can Fix Our Two Biggest Problems,” the best-selling, Al Gore- and Nancy Pelosi-endorsed book by environmental activist Van Jones. Though we hear a lot in the news about new LEED (Leadership in Energy and Environmental Design/) buildings and incentives for implementing the latest green technology, it’s often the case that fixing leaks and insulation are just as effective in reducing the carbon footprint of single-family homes (which account for about 18 percent of the country’s carbon footprint).

As people increasingly stay put — and re-sell homes less — this retrofit strategy makes sense. Millions of homes, not just low-income ones, are in need of the sort of weatherization the Obama plan describes. The non-profit Architecture 2030, established in 2002 in response to the global warming crisis, is leading a major effort in this arena with the goal of dramatically reducing greenhouse gas (GHG) emissions of the building sector by changing the way buildings and developments are planned, designed and constructed.

And after decades of renovation-obsession that has simply gotten out of hand, it seems a prudent time to swap Viking ranges for double-paned windows and high-efficiency furnaces. It’s the perfect moment to fix what we’ve got. Despite their currently low numbers, green homes typically re-sell for more money than their conventional counterparts.

I still dream that some major overhaul can occur: that a self-sufficient mixed-use neighborhood can emerge. That three-car-garaged McMansions can be subdivided into rental units with streetfront cafés, shops and other local businesses.

In short, that creative ways are found not just to rehabilitate these homes and communities, but to keep people in them.

image1: SOL Austin (Courtesy of KRDB Architects)
image2: “Aerial #65″ by Sarah McKenzie. (Courtesy of the artist)
image3: Lands cleared to make way for houses that were not (and may never be) developed. (DigitalGlobe, Sanborn, GeoEye, U.S. Geological Survey; 2008 Google Imagery)