My Little Public – See below

Earlier this year we introduced to you #networkedurbanism; now that the “studio report” book is almost ready, we are publishing a series of posts showing some of the projects that the students have developed during the 2010, 2012, and 2013 studios at the GSD.

In this fourth #networkedurbanism post we present to you three projects focused on social issues and placemaking, their main goal is trying to involve the local communities in the construction process of the future of the cities.

Kai Liao’s project began as an attempt to encourage a discussion to form a new concept of public space, acknowledging that we have a different perception of public space now in the information age, My Little Public is not criticizing current public space typologies but “is a project that attempts to search for the new potential of future urban spaces, in an age where our physical connection is no longer required.” At first she focused her attention on vacant lots in downtown Boston and drew the attention of some local organizations—like  STREET LAB—which eventually suggested her to apply her ideas on a smaller and closed network such a public school. With the help of a fourth grade teacher, she adapted the program so it could operate inside the school as a four-week experience. 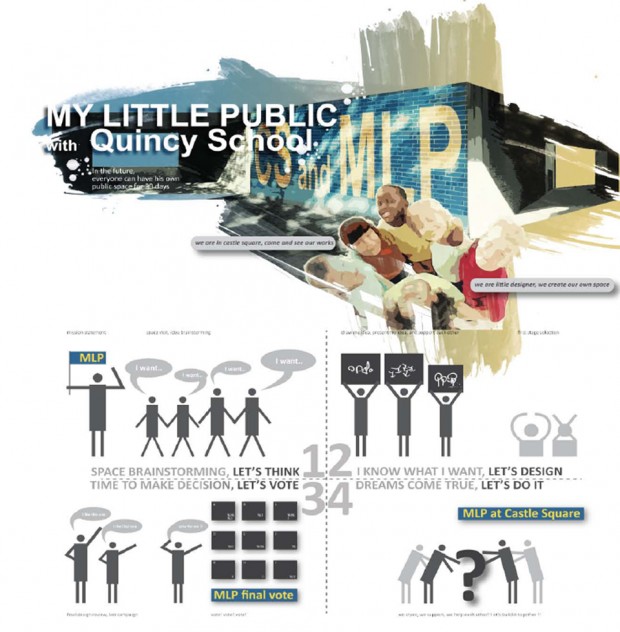 She describes the steps as follows: “First, we introduced three different operation sites to the students, educating them to recognize the nature of the site with the prospect that the proper program be introduced to the site[…] Second, we allowed each of the kids to utilize their own imagination to propose their wishes for the site they chose […] During the third week, they selected the six best proposals out of the original 24, and formed six official campaign groups. Each group created a campaign speech […] Finally, the winner, Coco-Nade was carried out during a lunch break—the students sold hot cocoa and lemonade for 50 cents. In total, they raised 110 dollars in 40 minutes, and the profit was donated to a homeless organization.” My Little Public showed how fourth-graders are aware of their environment and the social issues around them, how they can distinguish what is possible from what is not, and finally taught us that fostering children’s desire to cultivate an engaging and livable environment on the long term might lead to a new concept of public space.

You can read more about My Little Public on #networkedurbanism.

Kate Balug’s project for #networkedurbanism studio is part of a wider action she is carrying on with the Dorchester’s community. Dorchester is a large, historical, and multicultural neighborhood which is the object of a $15-million city planning initiative to improve its main corridor, Dorchester ave. Dot Future main point is “to first clarify the initiative’s intentions to the public, then generate discussion among a diverse cross-section of the population about how to maximize socio-economic benefits from this City-designed infrastructure plan. This would finally inform a series of interventions along the avenue that would operate as a fragmented monument to the past, present, and future of Dorchester. The effort hoped to enhance the sense of community agency over the area’s future.” 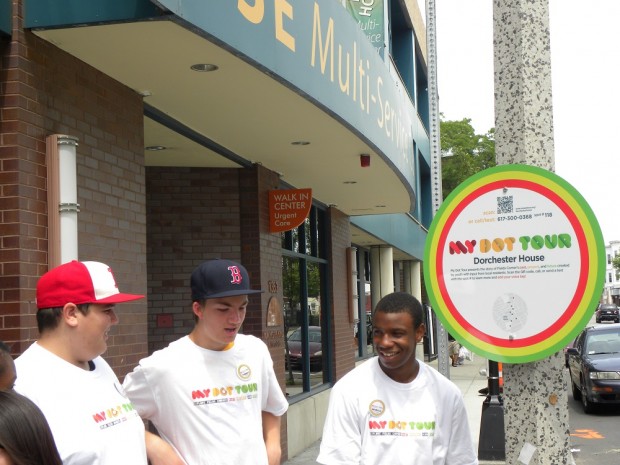 At first, the project faced many difficulties due to the large number of communities and organizations involved and the lack of engagement they had with each other and with the politics. The author herself had to work hard within the community to gain enough legitimacy but many organizations, despite being pleasant, were not interested to work with a student on an undefined project. Things turned out when she approached the local newspaper, the Dorchester Reporter.  She wrote a piece providing informations about the planning initiative and resident’s ideas for Dot Ave. From that point things went better, she was invited to lead a community workshop that explored local issues and ways to address them, and later came My Dot Tour, a multimedia walking tour of Fields Corner, an area along Dorchester Ave. led by local youth and featuring their commentary on the past, present and future of Fields Corner.

This project is still going on with the Dorchester community, you can read her posts on #networkedurbanism, and her articles on the newspapers here and here.

Community (re)engagement project explores the potentiality of design in community empowerment, community engagement, and participatory planning in Villa Victoria, a subsidized federal housing project with a large Puerto Rican community. The community was founded in the 1960s-1970s thanks to urban activism which granted the community itself control over the design of the housing project, its development, and the future maintenance of a high level of social capital in the community. During the last years, however, the community faced a series of transformations that they could not control. Through a series of workshops and public discussions the project aimed to identify the issue of concern and reengage residents with their community.

Three different age groups were involved in the workshops. The workshop with the residents showed that there were communication problems: “fear of displacement translated into dialogues with racist overtones, which created problems for any future interventions” . so an urban workshop was planned to help them channel their frustration in a positive way. Teenagers were interested in addressing urban violence so “they designed an urban installation in a park where many crimes have occurred” but unfortunately due to bad weather it was not realized. Children from the Escuelita Boriken worked on the safety of public space and specially walkways. As Irene Figueroa says “we were reenacting the origins of the community, which was founded as the result of urban activism.”

Discover more about the project on #networkedurbanism.