Twitter’s users have got into the habit of selecting and suggesting someone interesting to follow. This action has become a weekly international event and it is called #followfriday.

As you probably already know, [Ecosistema Urbano] has been inspired by the Twitter #followfriday to create a new section known as #followarch focused on recommending interesting and innovative architecture offices.

Today we are glad to present the work of the Italian firm based in Rome StudioUAP.

Urban projects, architecture and landscape design are the occasions for experimenting models for the introduction of social interaction especially with children and low tech architecture. studioUAP, works as an independent office, consultant or together with other architecture firms. Research field on Rome, through Microcities (1999), Romalab (2005) and the Bilancio Partecipato (2009) together with architecture competitions focused mainly on the design of public space (1st prizes Parco Radicelli and Paesaggi Mirati, 2008) has offered the opportunity to investigate themes applied to public works such as the kindergarten in Quarticciolo, the youth center in Corviale (innovation and urban quality prize EuroPA 2009) and the prototype design for a sustainable low cost kindergarten for Bracciano and other sites.

A 14.000 sqm park and a new sport center (3.128 sqm) are foreseen in Paglian Casale – Parco Radiceli, a suburban area of Rome along the Via Ardeatina. The project aims to reduce the impact of the new building and preserve the Agro romano landscape as much as possible. Parallel “layers” alternate green slopes with panoramic terraces and gradually connect the future housing with the more rural part of the park. Along the “edges” are located the new sport center and the park facilities, entrances and parking lots. The sport center (2 swimming pools, gym, club house) is strongly tied to the morphology of the site in a game of horizontal and sloping planes. The panoramic rooftop terrace offers new public space to the neighbourhood without compromising further soil and the connection between the housing and the park. 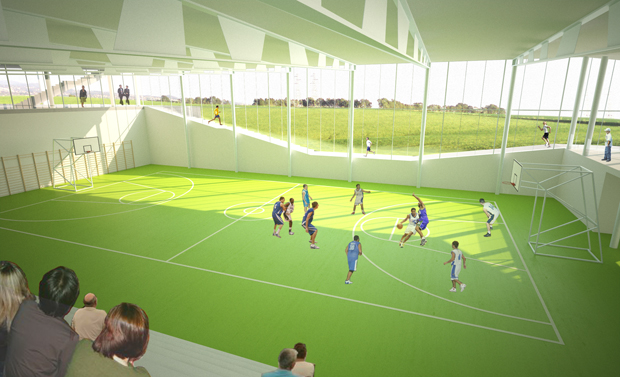 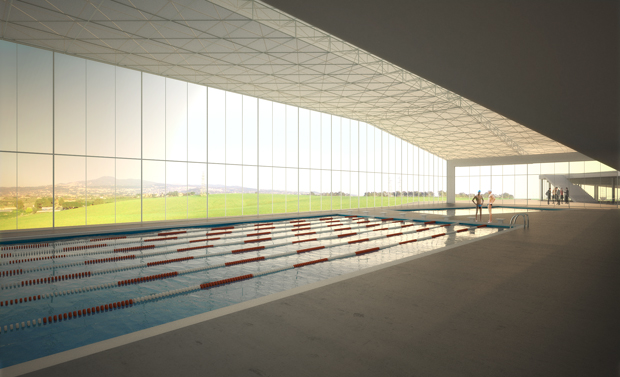 The design for the Children’s City of Frattamaggiore (Naples) offers the extraordinary opportunity to introduce a new landscape in the dense urban context: a wide pedestrian area on two levels with a piazza above and gardens and fountains below. The project’s idea is focused on the negative aspects of its surroundings that lack of public space. In contrast with the rest, the project becomes a sudden “oasis” fitted in the urban sprawl. The built parts over the ground level are limited and most of the rooftops are accessible. Because of the void created at the lower level the built surface is given back to public fruition. The project’s strategies are: give more space to pedestrians, increase green areas; introduce activities for all generations; promote sustainability both in the building process and in the management. 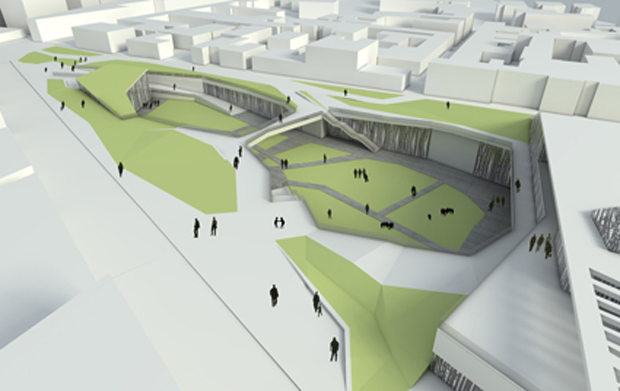 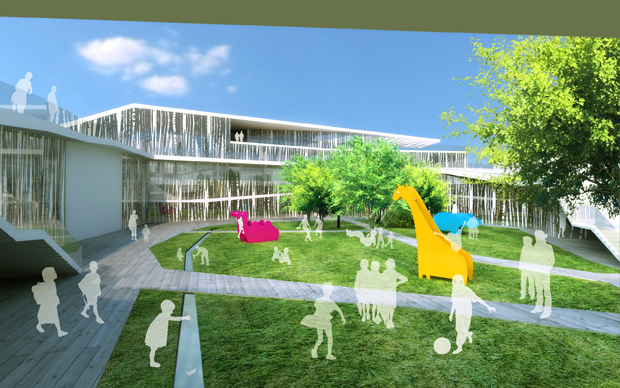 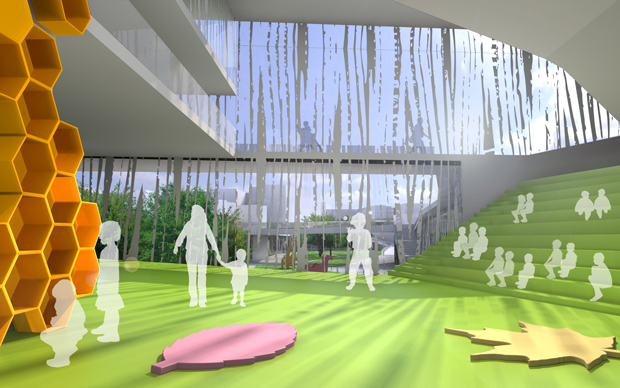 “Full time landscape” is the project for the low cost landscape competition Paesaggi Mirati. The project for the site in Armeno introduces new public space for a full time use during the day. The project’s aim is to have different overlapping activities in the existing parking lot (car park, market and playground) simply by painting on the ground.

The project has been fostered by the XVI Department of the City of Rome within the “Contratto di Quartiere II – Corviale”, in one of the suburban areas of the city internationally known for its social suffering. The renovation of the 14.000 sqm Park foresees the introduction of new activities together with a Children’s Recreation Centre for 45 kids. The building is constructed to compliment the morphology of the site in order to improve its environmental impact. The new (360 sqm) “bridge” building is on one level, located across a descending slope of the park facing the Corviale Housing building. It is possible to walk over the curved rooftop and reach the existing different ground levels. A new public space is introduced without subtracting any surface from the park. Two main activities are foreseen: the Children’s Recreation Centre (reading room, 2 laboratories, 2 halls and facilities); the Deposit for recycling materials for the “Re Mida” project. Solar panels will cover 50% of the energy requirements. 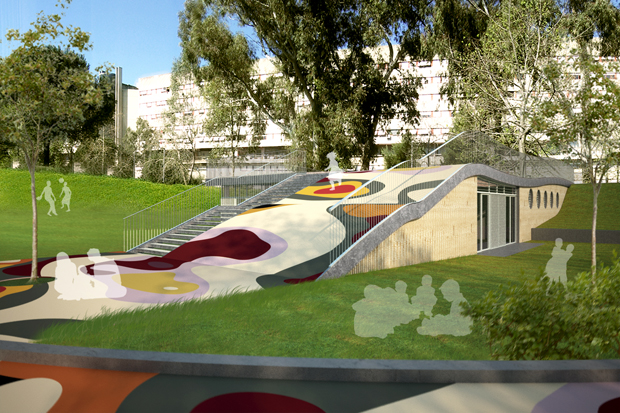 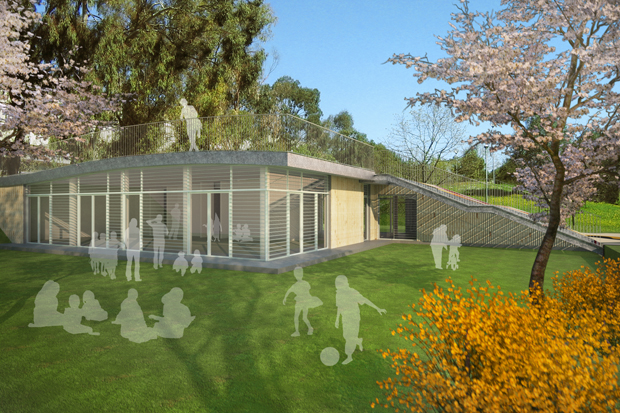 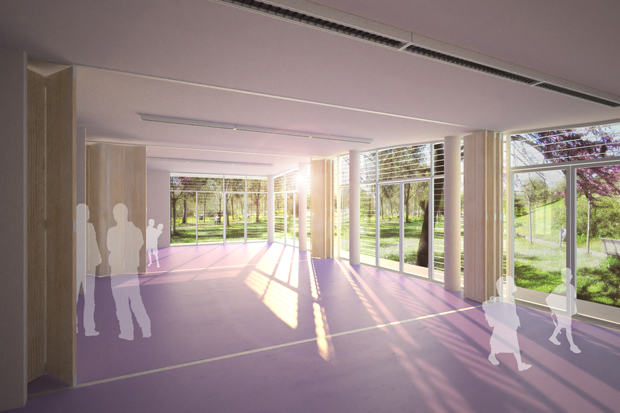 The kindergarten for 60 children is divided in 3 sections or classes. The building’s inner space is thought for the smaller inhabitants: the aim is to provoke curiosity on one side and provide major security on the other. That is why the plan is generated by curved shapes which give richness to the inner space. As a result, from the outside the building is very easily recognizable for its very different aspect from all the surrounding buildings. The entrance hall is a wide space meant also for common extra activities, surrounding an open air green patio. The hall leads directly to the three sections and to the administrative part with the kitchen and other facilities, all disposed in a ring around it. Each of the three sections have a direct access to the outside garden, spaces for educational activities, for playing, for eating, for resting and for physical care. The covering is flat with solar and photovoltaic panels. 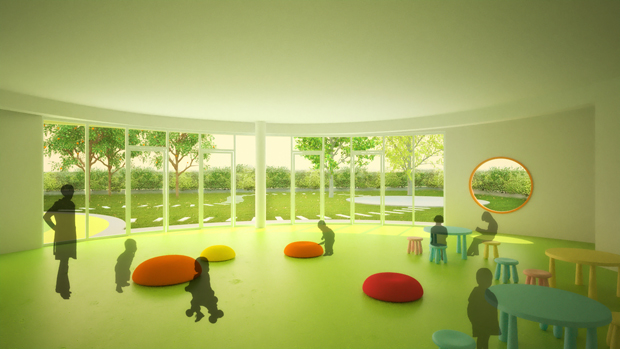 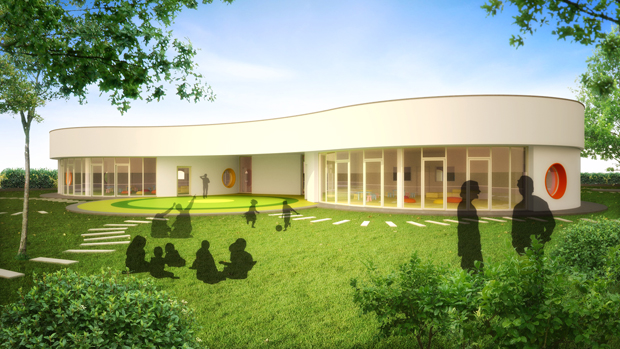 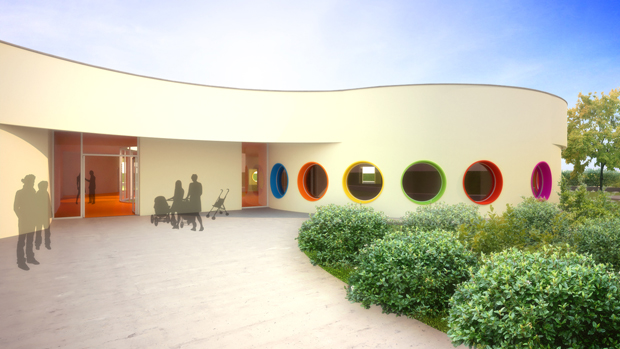 The first kindergarten will be built in Bracciano, to be completed in 2011. The scarce offer and great demand of such facility needed a prototype design meant for a low cost, ecological structure easy to realize and dismantle, based on energy saving criteria. The structure of the prototype can be entirely in wood or steel. The building has a compact volume, one story high, with a simple 600 sqm plan with three sections dimensioned for 60 children. 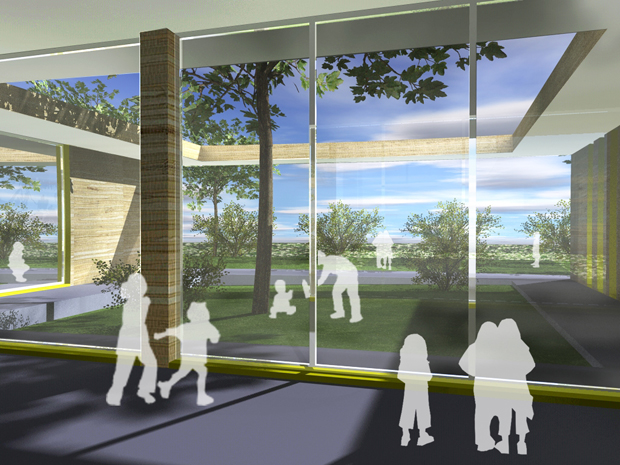 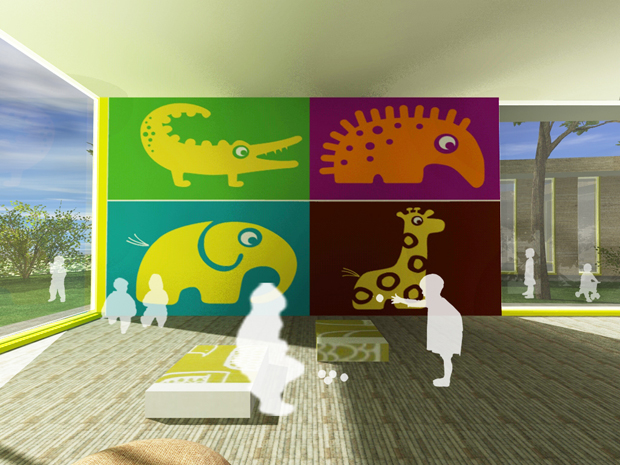 The experience for the ‘Participatory Balance Sheet’ and the consequent Master plan proposal of the Municipality VII of Rome, 2009/10, is published on the web book Interazioni urbane. Over 30 ideas have been proposed by the participants during the meetings for each district (available on line http://www.urbanarchitectureproject.org/ and on  http://www.bilanciopartecipato2010-rm07.info). One idea for each district has been voted by the participants and will be part of the future investments foreseen in the Municipality’s Balance Sheet. Other ideas on public space or general strategies have been included in the Municipality’s Master plan.

The project together with the Municipality of Rome has involved 16 schools in two different districts in 2005. The aim of the project was to introduce interest and understanding about urban transformations as a basis for further successful participatory processes. The project fostered seminars for the teachers, urban walks with the students and work in class. Three maps have been produced by each class: a map with the trip home-school of each student; the map of the district with the places they like and dislike; the map of the desires. The children’s observations about their district have been officially expressed to the local administrators in occasion of each municipal assembly.

The question is how to build a sustainable city with a balanced relation between built parts and urban voids. In the case of Rome two strategies are possible. The “landscape safeguard” strategy in the outer parts of the G.r.a. Where 72% of the territory is still unbuilt; and the “urban” strategy within the G.r.a. where 45% of the territory is unbuilt. The urban strategy has to face the time gap problem: in Italy public intervetions take from 5 to 9 nine years to be realized. In the meantime a solution are temporay uses, but most of all micro interventions or fragmented actions (framment-azioni) are most needed and capable to bring significative changes in the everyday lives of the citizens.

Romalab is a research group formed by several architectural offices working in Rome. The aim is to focus on the recent development of the city which has increased the gap between historical center and suburban areas. Urban policies and the new Master Plan have failed so far to integrate urban functions, to facilitate transportation, to improve ecological aspects and develop social issues, all priorities that cannot be given up. The development model foreseen is confirming the urban islands which are concentrated around the G.r.a. What has been built in the last 15 years is 4 times what was built in centuries within the ancient walls. http://www.commonground.it/romalab/ 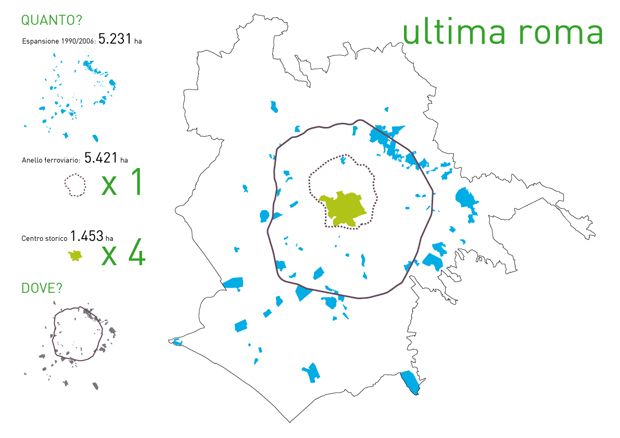