24 Rooms Tucked Into One 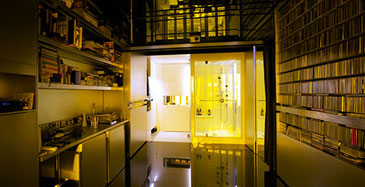 GARY CHANG stood in the middle of his apartment on a recent Saturday morning, ignoring a message from his Nintendo Wii on the wall-size screen: “Are you fidgeting? I can’t seem to analyze you.” He repositioned the game system’s balance board, stepped on for a second run of downhill skiing and began to shift from side to side, a computer-generated figure swishing in time with him across the room.

Soon enough, having worked up an appetite, he was ready to move on. He used a remote control to raise the screen, revealing a large yellow-tinted window behind it, filling the room with radiance. “Like sunshine,” Mr. Chang said, though the colorized gray daylight made the view — a forest of apartment towers in Hong Kong’s bustling working-class Sai Wan Ho district — look dusky, like an old sepia print. 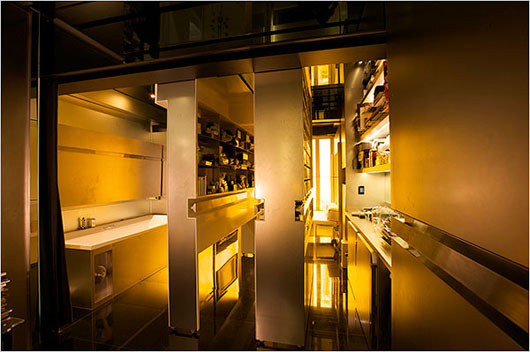 He grabbed a handle near the wall-mounted television, pulling a section of the wall itself toward the center of the room. Behind it, a small countertop with two burners, a sink and a spice rack appeared. Opposite the countertop, on the back of the now-displaced wall, he lowered a hinged worktop made of a lightweight laminate of honeycombed aluminum. Suddenly, he was standing in a kitchen.

This room — the “maximum kitchen,” he calls it — and the “video game room” he was sitting in minutes before are just 2 of at least 24 different layouts that Mr. Chang, an architect, can impose on his 344-square-foot apartment, which he renovated last year. What appears to be an open-plan studio actually contains many rooms, because of sliding wall units, fold-down tables and chairs, and the habitual kinesis of a resident in a small space. As Mr. Chang put it, “I glide around.” 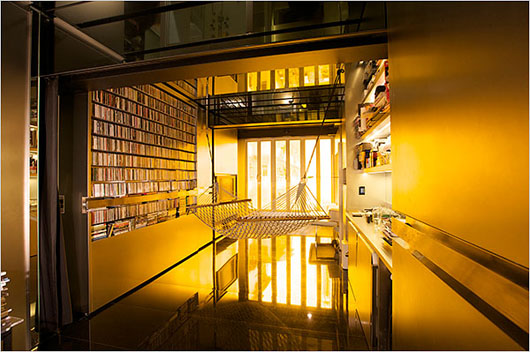 Mr. Chang, 46, has lived in this seventh-floor apartment since he was 14, when he moved in with his parents and three younger sisters; they rented it from a woman who owned so much property that she often forgot to collect payment.

Like most of the 370 units in the 17-story building, which dates to the 1960s, the small space was partitioned into several tiny rooms — in this case, three bedrooms, a kitchen, a bathroom and a hallway. Mr. Chang’s parents shared the master bedroom (though when they first moved in, his father lived in the United States, where he worked as a waiter at Chinese restaurants in various cities). His sisters shared a second bedroom, and the third, almost incredibly — although not unusually for Hong Kong — was occupied by a tenant, a woman in her 20s, whom Mr. Chang remembers only for the space she took up. 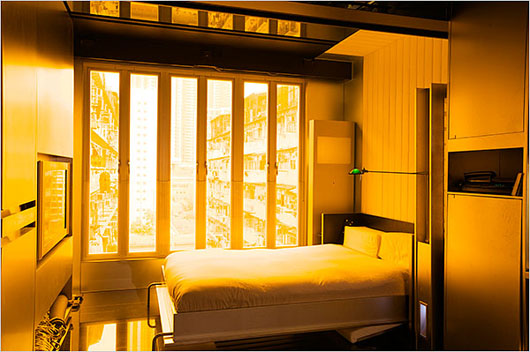 Mr. Chang slept in the hallway, on a sofa bed.

These days, he uses a hydraulic Murphy bed of his own design, hidden behind a sofa during the day. “That old routine of folding out the bed is similar in spirit to what I do today,” he said. “But the reasons are different. Then, it was just necessary. Now, it’s all about transformation, flexibility and maximizing space.”

MR. CHANG’S experiment in flexible living began in 1988, when his family moved into a bigger apartment a few blocks away, with his grandparents and uncles.

Mr. Chang was then working for the P&T Group, an architectural firm, and living in a rented room near the University of Hong Kong, where he had studied architecture. His mother suggested that he take over the lease on their old apartment, “because the rent was unusually low,” he said. Instead he bought it, for about $45,000.

He had been itching to tear down the walls since his teenage years, when he sketched new designs for the family home, and he then began in earnest. In the last two decades, he has renovated four times, on progressively bigger budgets as his company, Edge Design Institute, has grown. His latest effort, which took a year and cost just over $218,000, he calls the “Domestic Transformer.”

The allusion to toy robots seems apt, given the science-fiction quality of the color scheme — mostly black and silver, washed in eerie yellow light.

But if the apartment is a space for play, it’s very much the grown-up kind, involving the pleasures of luxury: Behind one movable wall of shelving is an extra-large Duravit bathtub. A glass shower stall doubles as a steam room with color therapy and massage. The Toto toilet has a heated seat and remote control bidet, and sound emanates from a six-speaker home entertainment system.

Moving partitions and opening cabinet doors reveals stacks of carefully chosen objects: Alessi dishes and Arne Jacobsen cutlery; what Mr. Chang calls an “altar of Muji accessories,” including travel bottles and neatly packaged tissues; and several thousand CDs filling an entire wall. (Mr. Chang, a technophile who checks on his apartment with a Web cam while traveling, refuses to switch to MP3 files because he loves CD cases and liners.)

The need for space to accommodate these collections was what drove his latest renovation.

In 1998, as part of his third renovation, which he called “Flexible Curtains,” Mr. Chang had remade the apartment as a single open room, in pale hues, with shelves concealed behind curtains. But his collections had grown too large to be contained by the shelving, and piles of objects had begun to colonize the glossy white-painted floor.

It is a familiar predicament in Hong Kong, one explored in “Domestica Invisible,” a 2006 exhibition at the city’s Goethe-Institut of Leung Chi-Wo’s photographs of clutter in cramped apartments. A curator described the condition as “a fundamental aspect of the city’s spirit,” and wrote, “there is no longer the capacity to enjoy open space, nor the room for imagining alternative lives.”

Mr. Chang hopes that some of his home’s innovations might be replicated to help improve domestic life in Hong Kong, which has been troubled in recent years. The population grew by nearly a half-million in just the last 10 years, and between 2003 and 2007, reports of new cases of child, spousal and elder abuse nearly doubled, something social workers attribute in part to new social pressures caused by the city’s ongoing shortage of space.

“It’s a big problem,” Mr. Chang said. “Killing each other is not uncommon.”

“People feel trapped,” he said. “We have to find ways to live together in very small spaces.”

In Mr. Chang’s solution, a kind of human-size briefcase, everything can be folded away so that the space feels expansive, like a yoga studio.

The wall units, which are suspended from steel tracks bolted into the ceiling, seem to float an inch above the reflective black granite floor. As they are shifted around, the apartment becomes all manner of spaces — kitchen, library, laundry room, dressing room, a lounge with a hammock, an enclosed dining area and a wet bar.

One can imagine three, possibly four people living here, using Mr. Chang’s double bed and the guest bed that hovers over the bathtub — though six or seven, the number of residents when Mr. Chang was growing up, would be another matter.

Acoustic privacy is limited. When Mr. Chang is entertaining, anyone who wants to use the phone must do so in the shower (also known as “the phone booth”).

Still, Mr. Chang is determined to see his ideas put to use in new multi-unit buildings. He has invited a number of developers to visit, and has meticulously documented his apartment’s history in a book, “My 32m2 Apartment: A 30-Year Transformation” (MCCM Creations, 2008).

Buying a new apartment might have been a less expensive solution to his storage problem, he admitted. “But why do that?” he asked as he stood in the kitchen making noodle soup. “I see my place as an ongoing experiment.” 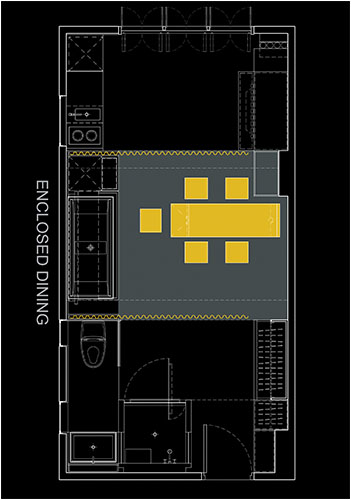 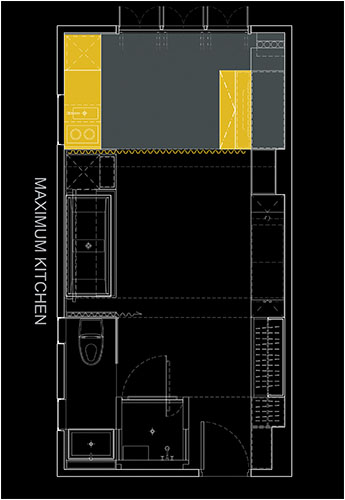 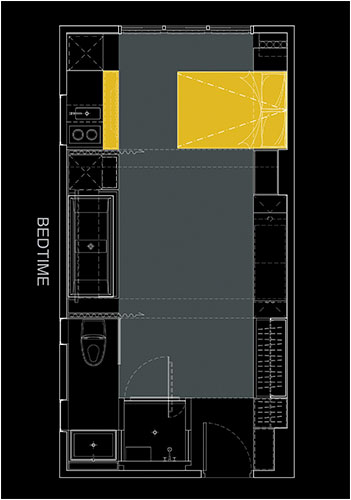