Twitter’s users have got into the habit of selecting and suggesting someone interesting to follow. This action has become a weekly international event and it is called #followfriday.

As you probably already know, [Ecosistema Urbano] has been inspired by the Twitter #followfriday to create a new section known as #followarch focused on recommending interesting and innovative architecture offices.

Today we are glad to present the work of the French firm based in Paris HDA | Hugh Dutton Associés that we have been recently following trough their blog and through their twitter @HDA_Paris.

We especially appreciate their approach that focus on an intelligent and poetic combination of architecture and engineering.

In the last months, due to a big “network effect”, some of their projects have been widely published, as well as their recently inaugurated footbridge design in La Roche-sur-Yon, France in collaboration with Bernard Tschumi. 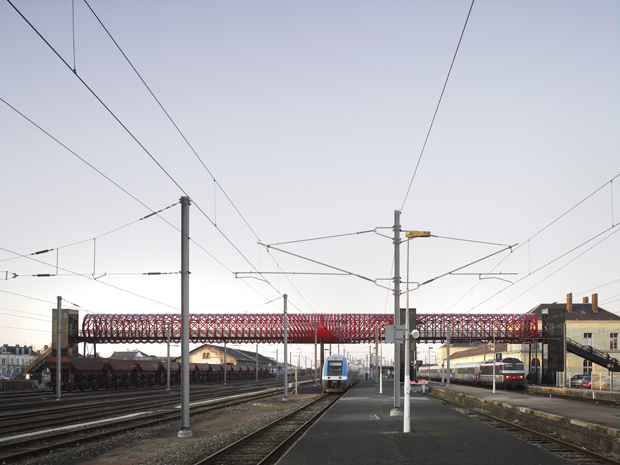 By the way, we would like to thank HDA for their funny fold-able Happy New Year card we’ve received in January and which is inspired by the footbridge design.

For more info on the footbridge you can read the article on dezeen or take a tour through HDA’s flickr page. 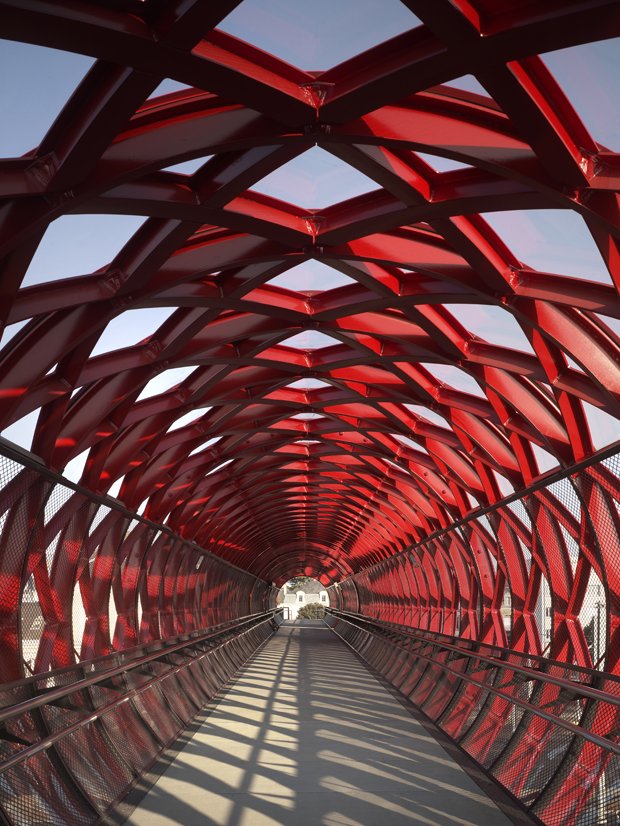 HDA has also won, in December 2009, the “Pylons of the future” Terna Competition for the design of new pylons with a minimal impact on the environment of the highest technical and aesthetic quality. 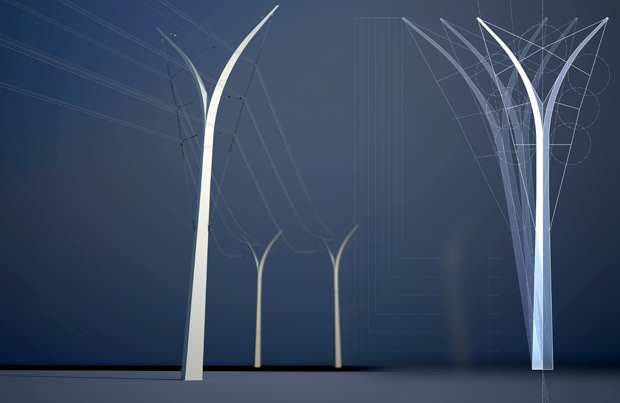 This is how the architect Hugh Dutton explains his design intention: “Our design response is based on changing the current “industrial soldier” image of today’s pylons. Primarily by an elegant shape whose form is inspired by nature instead of galvanized trellises. And secondly by what I have called – Dancing with nature – where the pylons lean and swerve in response to the topography. They find a structural equilibrium by leaning into the curve of the electric cables as they follow the constraints of the landscape.”

“The design is developed with an innovative working method inspired by today’s tools found in the computer and industrial technologies. The potential of these technologies permit us to optimally individualize each one and thereby avoiding the banality of standardization whilst limiting material wastage. In a similar process to nature’s own selectivity and optimization.”
We understand in this statements a clear belief in parametric architecture as a new design approach.”
As they say in their office intents description, “HDA believe in technology as a powerful medium to overtake standardization of modernism and develop a more human, nature-oriented, parametric architecture.“ 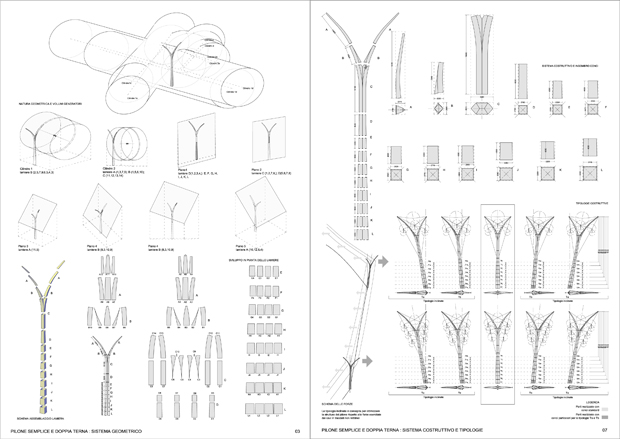 Construction technologies used for the pylons (flat steel plates cut with numerically controlled machines) are the same that HDA has already successfully used for the arch of the famous Turin Olympic Footbridge, realized in 2006 (you can visit this collaborative Flickr Group about the footbridge) 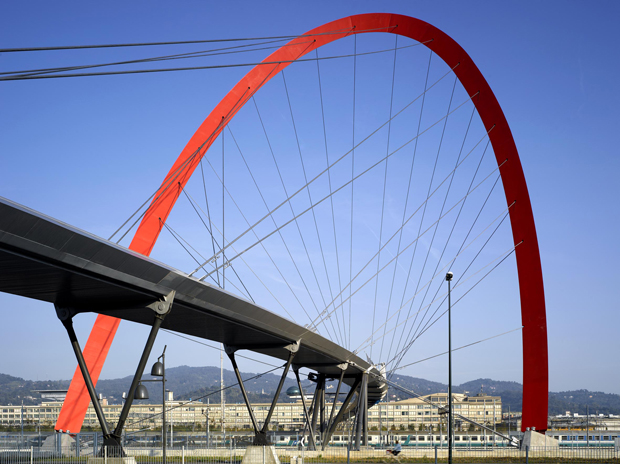 For more info about the design – Dancing with Nature – , visit complexitys or the flickr set, where images and technical drawings are shared under a creative commons license.

Texts below have been extracted from HDA references portfolio, that you can download in PDF on their webpage.

HDA | Hugh Dutton Associates is a specialist design company formed in 1995, based in Paris, France.

HDA comprises a team of architects and engineers providing specialist design services. Our work strives to provide design that is a synthesis of poetic intent and physical reality. Each project, big or small, varying from long span structures down to small fixing details, begins with a clear architectural idea with its own specific story to tell. The successful realization of the idea is dependent on a thorough understanding of technical constraints. The studio is an experienced team of designers from diverse backgrounds who specialize in works of complex geometry, innovative structures, 3DCAD, graphic design, 3Dimaging, engineering and detail design.

HDA believe in technology as a powerful medium to overtake standardization of modernism and develop a more human, nature-oriented, parametric architecture.

HDA works as independent architects, design consultants, and in collaboration with other architects.

Hugh Dutton qualified as an architect at the Architectural Association in London, after preliminary training at the University of Waterloo in Ontario, Canada. In search of complementary technical expertise he began his professional career with Peter Rice, a renowned inventive engineer responsible for the Sydney Opera house and Pompidou Center. Rice’s newly formed Paris Company RFR, including Martin Francis and Ian Ritchie, sought consciously to muddle the traditional boundaries between the architectural and engineering cultures of building professions toward an objective of an integral and holistic approach to design. His early years included experience at Norman Foster (Carré d’art in Nimes and Stansted Airport). Hugh Dutton collaborated closely with Peter Rice for 13 years at RFR, and related their experiences of the development of bolted structural glass and cable structures at the La Villette Science museum in a joint publication entitled Structural Glass. Wishing to take the design approach beyond modern steel and glass, Hugh Dutton, worked with Rice in his later years on developments in stone for its structural potential and translucent qualities. Notable examples are work on the Seville Expo 92 stone structure Universal Pavilion as well as the translucent west front of the Cathedral de Notre Dame de la Treille in Lille (photo below). 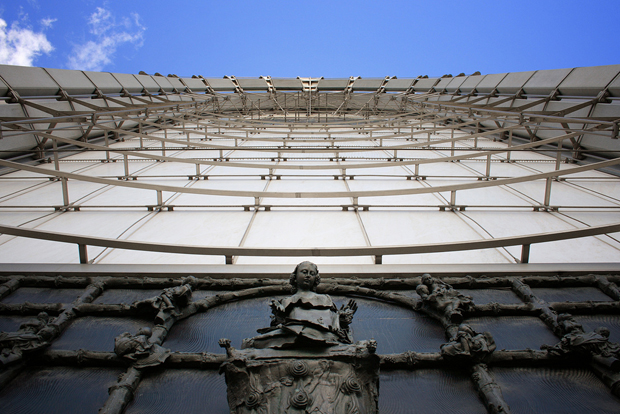 At HDA, given his background of technical expertise, Hugh Dutton continues his exploration of design and built reality, having collaborated with many well known architects and designers (Andreu, Arquitectonica, Bellini, Heatherwick, Nouvel, Ricciotti, Saee, Tschumi, Wong & Ouyang & others) assisting them on the realization of their concepts with a notable attention to detail.

You can find here an interview (in French) of Hugh Dutton speaking against “branding” in architecture. 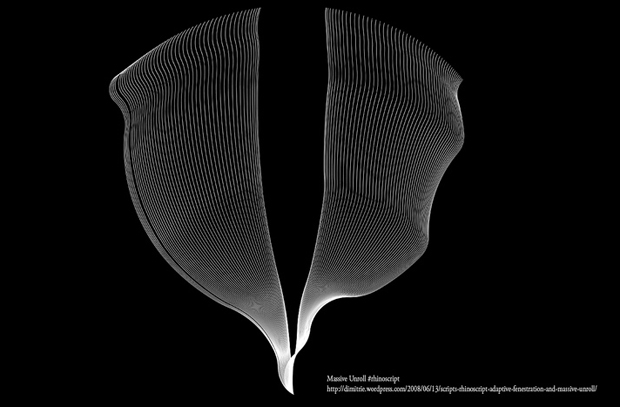 As we have already said, HDA also runs an open research platform named complexitys about architecture and complex geometry (image above). The blog aims to build a space for open debate on contemporary architecture and new technology issues. Complexitys is also the central node of an extended, internationally connected network of sharing and debate tools such as flickr, twitter, youtube and several external blogs.

HDA put forward the idea of sharing in Creative Commons as a way to get higher quality results. Photos, videos, texts, methods, research, calculation and drawing scripts which are traditionally used as the product, are shared for free and everyone is invited to use and improve them.http://complexitys.com/tag/script/- This is based on a future vision of practice based on design services and not on the product itself, as it is explained in the text “Guggenheim side effects and the Architects’ originality obsession”.

The very idea of sharing photos or videos related to “starchitects” productions under a CC license is often delicate but HDA believes in openness as a way to diversify architecture business and to overcome the flattening of culture which has become typical of the globalization process.