$2 Wind Energy for the third-world 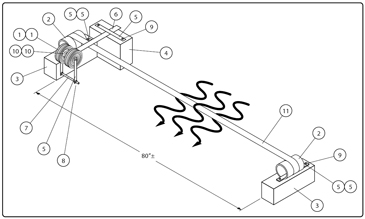 Shawn Frayne, a young inventor based in Mountain View, California, is the creator of Windbelt, a new device for wind-energy production based on an aerodynamic phenomenon known as aeroelastic flutter.

This phenomenon is a well-known destructive force and it caused, for example, the Washington’s Tacoma Narrows Bridge to collapse in 1940 (video). Researchers at Humdinger (this is the name of the company pushing forward the Windbelt technology) have discovered that it can also be a useful and powerful mechanism for ‘catching the wind’ at a variety of scales and costs beyond the reach of traditional turbines.

Prototypes generated 40 milliwatts in 10-mph slivers of wind, making this device 10 to 30 times as efficient as the best microturbines. A medium-size Windbelt™ building block has an initial target cost of $2 per rated watt. This is two to four times cheaper than photovoltaic systems and less than MW-size turbine wind harvesters, giving wind harvesting an unprecedented ability to power almost any application of any scale.

Frayne’s strategy consist in provide third-world distribution of his Windbelt with revenue from first-world applications.

One of the more interesting things in the company’s strategy is what we can call an open source approach to the development of this new device. Humdinger invite “Dummies and Rocjet Scientist” to review and experiment with a technical brief that anyone can download.

You can find a longer video conference on Google Tech Talk Channel.