What we’ve been up to | Portfolio Review and Current Projects

We know it’s been a while since we published something in our blog, but we can assure you that we have been everything but idle. In fact, it was totally the opposite: 2017 was a big year here at ecosistema urbano. We had the opportunity to develop a wide scope of projects, from participatory workshops to urban-scale studies, in countries like Mexico, Argentina, Ecuador, Germany, and even Spain! Let us have a look at the last updates to our 2017 portfolio, and some of the projects that are coming during 2018.

The Inter-American Development Bank (IDB/BID) tasked us with the challenge of reactivating urban spaces around the Historical Downtown in Hermosillo, Mexico. For this project, we put in place a brief but intense participatory process involving different stakeholders (institutions, businesses, students, neighbors) from Hermosillo. That way, we were able to identify the key aspects to address towards the revitalization of the city center. The Idea Hermosillo Revitalization Plan consisted of a brief diagnosis, a series of general strategies, and a set of 27 pilot projects which, together, would help reactivating the urban spaces in the area. One of these pilot projects was further developed as proof of concept: the Banco de Ideas, proposing the renovation of an existing building with a creative and mixed program that would act as a catalyst for attracting activity and driving interest about the Historic Downtown.

One of the pilot projects in Hermosillo – ‘Banco de Ideas’

See the “Idea Hermosillo” project in our portfolio

The Febres Cordero School was identified as one of the key interventions in the the CUENCA RED project in Cuenca, Ecuador. The proposed project keeps part of the original school building while creating a new mixed-used building in side it. The main goal was to create new public spaces and combine local businesses, a civic center, student residences and other uses that would help activating the surrounding area. The new Febres Cordero building also implements sustainable design elements such as locally sourced materials, bio-climatic façades and passive temperature regulation. 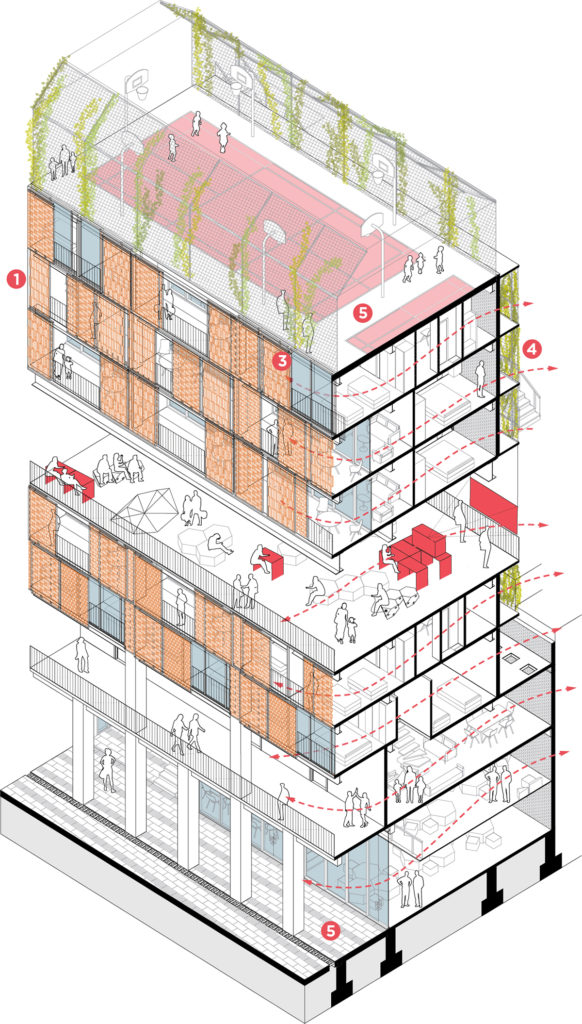 See the “Febres Cordero” project in our portfolio

In 2017 we were also invited to take part in an international competition to design the conversion of a former military base in Heidelberg, Germany. The City of Heidelberg alongside the IBA hosted a competition for the opening of the -until then- restricted area, and creating new public spaces for the city to enjoy. ecosistema urbano devised a playful layout for the park, concentrating the intervention in the central areas of the open spaces, and integrating the existing pavements and elements whenever possible. The overarching design and pathways of the park were conceived as a “game board”, where elements of the park, such as playgrounds, would become “game pieces”. The program and final design of these elements would be defined by the “game rules” consisting on a series of participatory processes involving neighbors and other stakeholders. 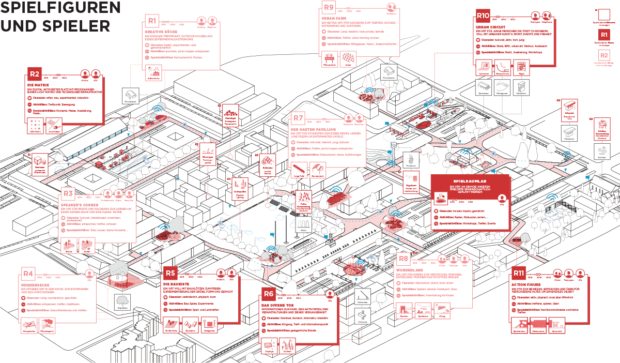 See more about the “Spielraum” project in our portfolio

This project consisted of the preparation of a big participatory project in Getxo, Spain, towards the conversion of a closed sports area into an open park. An urban diagnosis of the Fadura area was made in order to identify the main issues, challenges, and opportunities that the park, the surrounding area and the population currently possess. This diagnosis was intended to inform both the technical development and the participatory process. In addition to this, a social mapping was created by meeting and interviewing all possible stakeholders and representing their relationships, their possible level of involvement and the key topics they were interested in. Over the course of four months, the team conducted multi-stakeholder meetings and presentations to engage the users of the park, as well as to inform and prepare them for the participatory process. 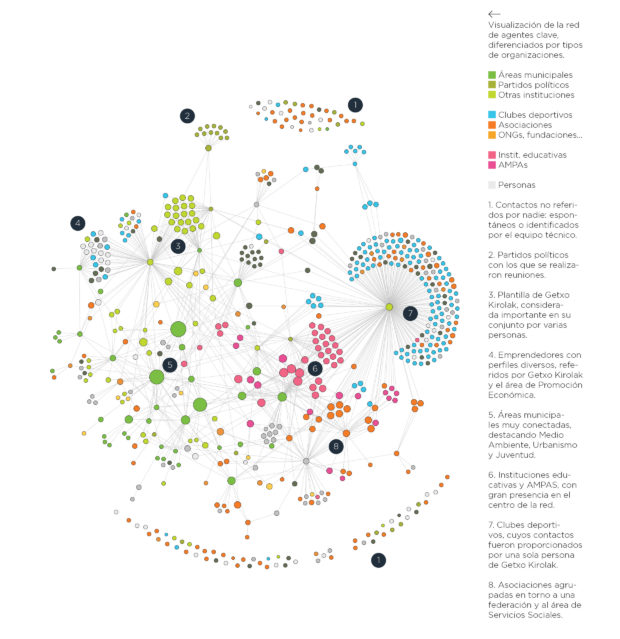 Stakeholder mapping as part of the preparation for the participatory process

See more about the “Thinking Fadura” project in our portfolio

In the same sports area in Getxo, Spain, a participatory architecture project was commissioned to us, with the aim of building a community center in the place of a public facility which had recently been damaged by a fire. In its final years, the former pub (cervecera) was used as a social facility. In order to create a design that would allow for the same level of engagement and active use, a participatory design process was devised. Three workshops were conducted where stakeholders could take part in the rethinking and redesigning of the building and its surrounding open spaces. At the end of the process, a sustainable and flexible community center was designed, capable of hosting even more activities than before while remaining adaptable to future needs. 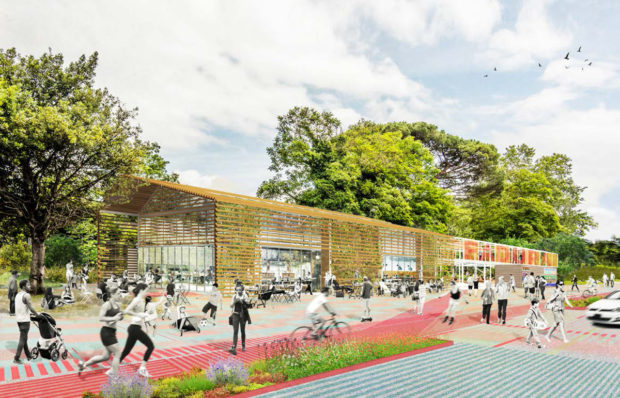 Rendering of the envisioned cervecera

See more about the “Fadura Community Center” project in our portfolio

As part of the 100 Resilient Cities program in Santa Fe, Argentina, ecosistema urbano was asked to lead a participatory project for the youth of Santa Fe. In this exciting activity, we had the opportunity to create and run a program which allowed children to get involved with the future of their city. The children were led through an explorative stroll around Parque del Norte where they were encouraged to be creative about what they observed and what they envisioned for the park. Afterwards, the children drew on maps to demonstrate what they hoped to see implemented into the future park. Then they were given materials to create small models of their proposals, micro-landscapes they created using natural materials, sourced from the park itself, in a transparent box. The maps and boxes provided invaluable feedback in order to include the vision of the younger citizens in the future park.

Images of the “participation kits” used for the creation of models

In a collaborative project with the European Commission, ecosistema urbano is helping to define the European Union Green Public Procurement (GPP) Criteria for Public Space Maintenance. We are working on creating a guide of best practices that will become the framework for procurement processes regarding public space maintenance. This project will have a big impact due to its scale: the public sector represents 14% of the GDP of the European Union. Therefore, a systematic sustainable change in any part of the public sector will increase the market viability of sustainable products. Our participation in this project will help to augment sustainable change and cost effectiveness in the EU.

Other ongoing projects in 2018

The past few months have been incredibly busy at ecosistema urbano, with more projects happening all over the world. Here are some examples of what we are working on right now: