El Campo de Cebada is a project carried out by the neighbors to incite the temporary occupation of the vacant lot in Cebada square in the center of Madrid.

If you live in Madrid, you probably had the chance to peek through the flimsy walls that shelter El Campo de Cebada. In the heart of the city, alongside the market in Cebada square in La Latina, the “Barley Field” – literal translation of “Campo de Cebada” – under the guise of disuse, oozes an unexpected welcome. After more than two years of bare cement and a great deal of joint effort, the vacant lot now blossoms with people.

From Arab cemetery, to actual square in the 16th century where the barley was sorted, to indoor market inaugurated in 1875 then replaced by the present one in 1962, to sports center built alongside the market in 1968, the site inherited a turbulent past. And yet, it is recognized as a place of commercial and especially, social exchange. Or it was, until in August 2009, according to an urban requalification program of the center initiated by the council of Madrid, the sports center and its public pool are demolished. Unfortunately, the city council is unable to raise the money for the new equipment, and the construction is delayed, leaving the neighborhood with an impenetrable square for an undetermined time; end of the story. 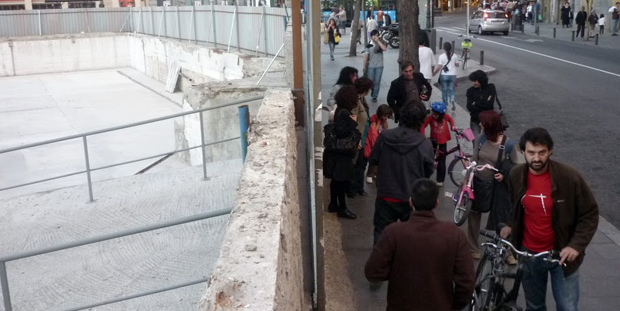 But after one year of silence, the empty space suddenly comes back to life. In September 2010 took place, under the direction of the Basurama collective, the annual event La Noche en Blanco: 21 activities to fill Madrid’s main streets with temporary occupations of public space, and reinvent our relationship to the city. Inspired by the slogan “Play on”, the Exyzt collective took over the vacant lot to put up City Island, a “temporary but lively public space to enjoy the shade of the rain forest and its lagoon”. For ten days, the neighbors had once again a place where they could simply meet, play, chill out and enjoy. As the event was coming to an end, and the “island” being dismantled, various discussions rose as to one concern: was the bursting activity following the one shot of City Island really meant to disappear again, pending for the vague promise of a new equipment to be fulfilled?

This is how the Field began to grow… ideas. Neighbors, members of local associations, stallholders of the nearby market, people of all ages and background, along with the Zuloark collective, gathered around the same ambition, get back the public space that was due to them. El Campo de Cebada became an association, a web page and a silent commitment. The process started with weekly meetings in the Onis bar, in front the vacant lot’s entrance, to compose a first draft of intentions before facing the city council. On the 1st of December was held the first meeting with the local authorities, and the real negotiations began. Meanwhile, the project was gaining interest and support among the local associations such as AVECLA and FRAVM, and arousing local curiosity. Several meetings followed, until on February 18th of this year, a temporary cession of the vacant lot was signed with the city council, and El Campo de Cebada opened its doors. 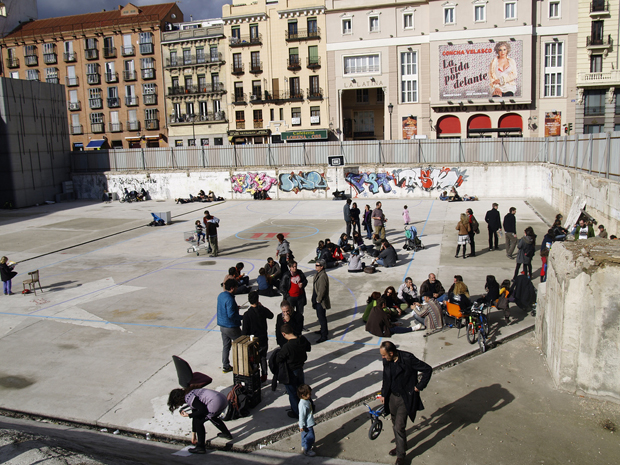 At the dawn of spring, under Concha Velasco’s silent oath “La vida por delante”, El Campo de Cebada started collecting ideas from the neighborhood, giving any proposal, activity or project of cultural, social, artistic or sportive nature, and of social purpose, the opportunity to come forth. Basic equipments, such as an electrical input and a multi-sport game court for local tournaments were quickly provided. Small chalkboards were placed at the entrance, to catch ideas passing by and communicate upcoming events. People started sharing questions, ideas and proposals on the web page. Weekly public assemblies were organized, along with the members of El Campo de Cebada association, to consider, review and schedule the different projects. Several ideas began to sprout.

Little by little, the once monotonous cement dressed with lively colors, work of some merry volunteer painters. The once vacant lot filled up with awkward objects: among others, mobile seats of all shapes, made from reused wood during the “Hand made Urbanism” workshop, conducted by  Zuloark with students from the Universidad Javierana de Bogotá, a shed on stilts, put up by Todo por la praxis, and shademakers made from wire rope and reused canvas by Basurama as an attempt to built shadows in the unfortunate solarium the place had become. And the once still and silent void came back to life.

Local festivities, meetings, events, tournaments… ever since its opening, El Campo de Cebada has rarely been at peace. This summer was set up an open-air cinema, and various concerts were held. Every Sunday, the Field fills with the melodies of Cantamañanas. El Campo de Cebada also became a shelter for “inappropriate appropriations”. A place of opportunity for social enterprises such as #edumeet, a twice weekly open meeting to debate on education, or Desayunos ciudadanos, monthly public breakfasts that take place in a street or square of Madrid to claim public space as propriety of the citizens. A meeting point where the community can discuss on the problematic situations regarding the neighborhood and brainstorm potential solutions, especially regarding the market’s and the new sports-center’s outcome.

But more than a place, or the climax of a specific claim, El Campo de Cebada is a process committed to participation, transparency and sociability, an experiment of placemaking between the citizens, local associations and political institutions. From seeding hopes, desires, and expectations, it is now bearing the fruit of a collective mobilization. But it doesn’t stop here. Harvest will come in time to gather new seeds, new farmers, and sow more cement fields among the many remaining in the city. 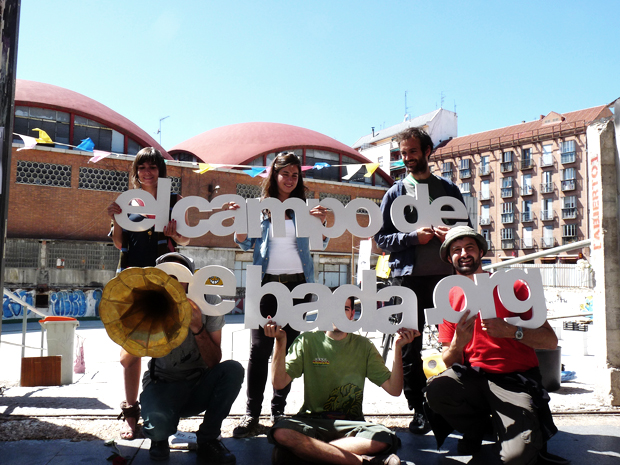