public space for the extreme: evaporation 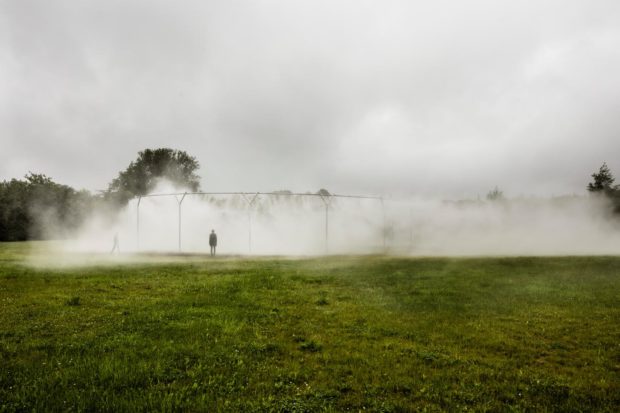 Evap·o·rate, to pass off in vapor or in minute particles.

All evaporative cooling rely on the energy required for the evaporation of water to absorb heat from the air and lower the temperature. This is due to the very high enthalpy of vaporization of water, the phase transition between the liquid and the gaseous state requires in fact a large amount of energy (which is more properly called enthalpy) that is taken from the air in the form of sensible heat (which is the temperature, something we feel with our skin and determines our comfort) and it is converted into latent heat (which is an energy “hidden” in the vapor component of the air). The result of this adiabatic process is a drop in the temperature of air and an increase in its humidity, therefore it’s clear that this cooling system is particularly effective in dry and hot climate zones where the higher humidity and the lower temperature can be both seen as advantages. Clearly the evaporating process is a key also for some convective cooling processes (that we treated here) but they rely also on the reduced buoyancy of cooler and more humid air to obtain the final effect while evaporative cooling techniques only rely on the evaporation of water.

Although primitive evaporative techniques were used in ancient times (in combination with convective and ventilation devices like windcatchers and qanats in iran) and porous water jars are still used in many hot areas in combination with Mashrabiya other ventilation apertures to naturally cool down the interior of buildings the use of evaporation to cool down outdoor spaces is very recent. Evaporative cooling depends largely on how effective we are able to evaporate water, and a basic physical variable plays a big role in this case: surface-area-to-volume ratio, the more surface area we are able to expose the more energy we are able to exchange.  There are basically  two ways to proceed nowadays to maximize the surface area, evaporative pads and misting. Evaporative pads are generally used in evaporative cooling machines oriented to indoor cooling, these pads are cheap and effective but they are relatively fragile, require continuous maintenance and are most effective in controlled environments where the airflow can be adjusted and controlled, the “wetpads” are made of porous materials that have to be maintained wet while air passes through. The peculiar structure of these materials offers the largest possible surface area to the passing air which is then humidified and pushed into the building or the room. This technique can’t be used for outdoor cooling clearly because of the required control to the ariflow that is necessary.

Misting is instead widely used nowadays to lower temperatures both in buildings and open spaces. The use of water mist to generate passive cooling in closed buildings is strictly related to passive (or mechanical) evaporation towers and therefore to what we have been explaining in the convective technique post in open spaces the use of water jets and mist is instead very efficient (of course depending on specific climate conditions) and cost effective.

Although it is not strictly designed to be a bioclimatic public space, the Miroir d’eau designed by Michel Corajoud in 2006 in Bordeaux is one of the most successful examples of water evaporation usage in public space design. In this case a large square, just in front of the famouse Place de la Bourse, is designed to be a large water mirror where hundreds of water nozzles spray water from the floor either in the form of a fountain or of a mist cloud. In the first case, where tall gushes are produced, water evaporation is limited and the playful atmosphere dominates the large plaza, but when short mist clouds are produced the evaporation rate of the water is greatly increased and a cooling effect is produced, although in Bordeaux climate conditions are quite mild, and hot days are limited to few occasions during summer the square is very popular. Vaporizing water coming from the floor is a quite common and effective mean to condition large open spaces, the effect that everybody has noticed of a slight refreshment when passing by a fountain in a square or, even more, while staying close to a waterfall is due to the very same thermodynamic principle, the small drops of water that the are created when water breaks while falling to the ground or splashing into more water dramatically increase the surface-area-to-volume ratio favoring a faster evaporation, the nebulized microscopic drops evaporate instantly causing a sudden temperature drop that can be magnified by the wind or other design inventions. In the Sevilla 1992 EXPO this effect was widely used, large fountains and water basins were placed all around the EXPO along all the main paths and squares to increment climatic comfort, in some areas even vertical walls of water were designed to expose the visitors to an even more effective cooling device, but the most common strategy was the use of conventional fountains and mist nozzles integrated in the many green shading roofs. The design of these spaces has to be developed with special care, the effectiveness of the strategies used in Seville for example varied much depending on the surrounding conditions, evaporative cooling could be very effective if combined with the right design of protective and shading elements, with a correct sun and wind exposure and material use but could be also nullified simply by not considering the wind variation. Even if water vaporization is widely used in many terraces, bars, public venues, etc. because of its low cost, obtaining an effective bioclimatic effect is harder to achieve. Ecosistema Urbano employs evaporative cooling in one of their seminal project, in the Vallecas ecoboulevard, the Ludic and the Media Tree are not equipped with evaporative towers but with water spraying nozzles that are oriented towards the circular public space beneath them. The main innovation in the use of evaporation in this case is due to the form of the designed public space, because, as we already said, there is not much to innovate about the nozzles technology itself. Actually the most important issue is the control of the water flow and pressure as it has to be correctly regulated depending on the actual dry-bulb and wet-bulb temperature, relative humidity etc. in the case that those variables are considered, evaporation should be instantaneous without any dripping nor condensation. In the case of the Media Tree temperature and humidity sensors regulate the flow and the pressure of the water flowing to the spraying nozzles constantly adapting it to the weather conditions. In this case the design is particularly effective not only because of the cooling technology but mostly because of the shadow provided by the “trees” themselves and the protective design of the ground section that allow the cooled air to linger in the “inhabited” space and not being immediately dispersed. But misting has a close bound with atmosphere and space, being one of the few atmospheric phenomena that we can directly observe fog and mist have been used also to define spaces, these new approaches, even though not directly related with bioclimatic architecture, open the door for future developments. In one of their most famous, and paradoxically iconic, works Diller+Scofidio designed a “formless, massless, colorless, weightless, odorless, scaleless, featureless, meaningless” that was basically made of mist and nothing else. Their explication for the work was open-ended, blur-building was not only the name they gave to it but also a factual assertion: the definition of it was also blurry. This event contributed to redefine, or to destroy, the meaning of building and the separation between what is a building and what is environment, up to even questioning what is architecture, for the first time the space was not defined by walls or windows or any stable solid material but was only an undefined mutating cloud made of vaporized water.
But this wasn’t in fact the first building that used mist water to blur its edges (although that they are all curiously related to universal expositions, more about expos here), the Pepsi pavilion in Osaka was the result of the fructuous cooperation between engineers and artists within the Experiments in Art and Technology  group and it was constantly covered with a thick layer of fog that partially hid it. In this case the building was still present and firm, a concrete entity with an interior and exterior form and a “conventional” space inside but the fog sculpture, designed by the japanese artist Fujiko Nakaya who spent her life working with fog, contributed to the creation of a memorable innovative pavilion. At the Seville EXPO in 1992 the so called “bioclimatic sphere” was also one of the main attractions of the whole exhibition and surely one of the most iconic ones. A tubular sphere was placed in the middle of one of the most important boulevards of the exhibition rounded by fountains and water basins as a part of the bioclimatic design of the open space of the exhibition. Although being highly symbolic and recognizable this sphere as reported in the follow-up publications about the Expo was not really contributing to any bioclimatic effect on the square or the boulevard, this depended basically on the fact that the device was placed in an open space and the diffusion of mist was not controlled in any way (a very interesting publication about the follow up of the climate conditioning in the EXPO 92 has been published by the same engineers that contributed to the design of the project and a short extract can be found here). In 2016 also the famous artist Olafur Eliasson started working with fog and misting, naturally he is not concerned with the bioclimatic function of fog but more about the terms of landscape and vision and interaction between the user and the fog itself. Placed in the Versailles garden, “fog assembly”, is a ring emitting a swirling mist that involves the objects around and changes appearance depending on the site conditions. The user is invited to interact with the installation, crossing it and begin part of the fog it is producing, in this sense, this artwork can be easily assimilated to a public space generating a connection with the theme of this research.