URBACT | From macro to micro-urbanism

Any analysis of today’s reality of European or Spanish cities and their current urban trends will entail placing them in a context of crisis that globally implies, among other structural issues to be taken into account: climate change –with unforeseeable characteristics and demanding modifications to be made to energy and consumption models- or the enormous concerns for the collapse of world economy and the crisis of financial systems and their direct or indirect impact on urban ways of life. This very complex moment forces us to be more conscious of our limits and announces the end of an era of apparent safety and the beginning of another that ranges between the unforeseen and the uncertain.

The current crisis is particularly serious in Spain due to the economic model of preceding years, strongly based on building construction and exploitation of resources, in particular the resource of land. In this context of required change it is necessary to try to focus on a fixed reference point or frame where the basic axis for urban interventions can be set. The current scenario is a complex one, there are few certainties and time and processes are key characters. However, this crisis, like any other crisis, is not only useful for correcting trends but mainly for detecting opportunities. A time of large changes and few certainties is probably when the greatest demand for creativity, innovation and prospecting for opportunities for the future should occur, as well as when time should be taken for thinking before acting, making the most of a moment of lesser economic acceleration.

URBACT | The city of our dreams

Let’s accept the crisis. Personally, I accept it convinced that it has an important systemic character and that it urges us to act because we are still far from seeing signs of the crisis bottoming out.

As a society, we have neglected all the signs that forecasted the collapse of the economic system for decades, and we have insisted in pursuing till the end a development model that, besides being deeply unfair and unbalanced, has shown itself to be exquisitely hypocritical, in particular for those of us who have tasted it to a greater extent.

The population of the so called developed countries have placidly flown with the tide of the promise of individual happiness, of the illusion of personal fulfilment, of the glare of the American dream….

The blindness caused by the flashes of the consumer society has driven us to an individualized existence, to the point that we have forgotten every social or environmental compromise with our environment. Meanwhile, we were begging to establish economic links with external powers we don’t even know, nor understand, and, of course we don’t control. These links have made us accomplices of this human devastation and environmental pillaging our mortgaged planet is suffering. 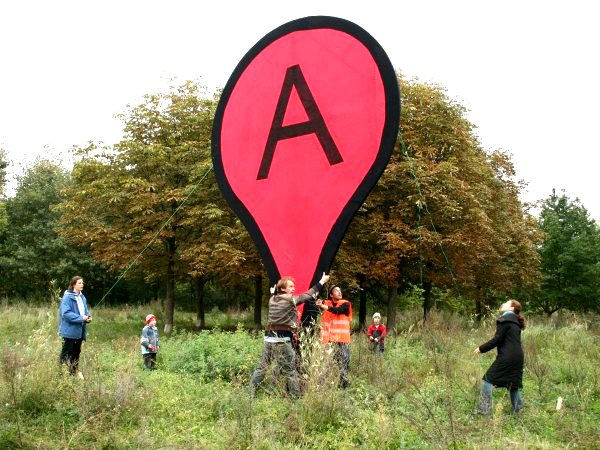 As a current semi finalist for the Buckminster Fuller Challenge award, Ecosistema Urbano is proud to share the Buckminster Fuller Institute’s Summary Assessment with our readers. We are always excited to read that others believe in the potential of our work to inspire and engage architects and residents to become active agents of change. You can find Ecosistema Urbanos complete Semi-Finalist profile here

Ecosistema Urbano is an architectural firm located in Madrid, Spain led by Belinda Tato (@belindatato), Jose Luis Vallejo (@jlvmateo), Michael Moradiellos (@terapiasurbanas) and Domenico Di Siena (@urbanohumano). The core of their proposal centers on contributing to an emergent practice of urbanism that responds more fluidly to the nature of contemporary urban problems. “Creative Urban Sustainability” is the theoretical framework that scaffolds their endeavors, which include built prototypes, an online platform for citizens to engage with their cities and Web 2.0 tools for design practitioners to engage with each other. The idea is simple: combine innovation, creativity and action to generate urban solutions.

Three projects they recently launched highlight their approach. The first is the Plaza Ecopolis pilot, a demonstration site focused on water issues and on transforming local cultural norms. It features a macrophyte water treatment system integrated into a complex of buildings (including a kindergarten) built around a plaza. The second is the What If Cities web platform that asks citizens to imagine what their cities could do and be. Anyone can download it as open-source software and modify it for his/her town/city. It is currently being used in France, Germany, Spain and Italy. The third is a blog and TV station they launched as a solution generator and mode of exchange for fellow design practitioners.

We are glad to report you that Ecosistema Urbano’s principals Belinda Tato and José Luis Vallejo visited Hamar last week to present the ONETHOUSANDSQUARE project to the city’s politicians.

Work on the project has not yet begun and another article was published in the local newspaper, supporting it in the name of democracy – “Invitasjon til demokrati” (invitation to democracy) was last week’s title in Hamar Dagblad, a local newspaper.
“I think the Spanish project is exciting, especially because it invites us to participate in a democratic process’ says Brox Haugen (..) Today the square is large, sloping, gray and noisy. We, the local residents, must find out, preferably together, how we can make it more inviting.’”.

Please see bellow for the complete article (in Norwegian). For more information about the project please visit the website ONETHOUSANDSQUARE.