[work in progress] One Thousand square

Lluis Sabadell and Ecosistema Urbano will design the Art in the Main Square of Hamar, Norway.

After a first open call with 78 teams presented, we where short listed with other four teams. Now we will work in Hamar with another team, Lars Kjemphol with the architects of Lalaland, because the jury thought that booth proposals are interesting and complementary. Have a look to the proposal of Lars Kjemphol.

You can find more information about the results of the competition here.

On this site you can find the video we made with Laboratorium.

Here an extract of our proposal and the pdf of the book we presented.

ONE THOUSAND SQUARE (OTS) is a collaborative design project for the public space of Stortorget, Hamar. It is an innovative experience of public participation empowerment. 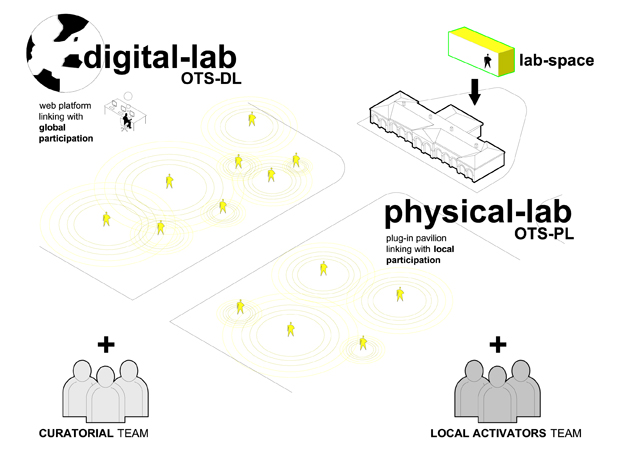 1_As a first phase we create the OTS_LAB, consisting of four elements for the development of the process:

+ the OTS_DIGITAL-LAB (OTS_DL): a web platform that provides digital tools to open the process and coordinate the different contributions.

+ the Local LAB Team (LLT): a local coordinator and two research fellows recruited through an open competition. The aim of this group located at the LAB-SPACE is to empower, coordinate, organize, advertise and develop all the practical questions about the project.

+ the Global LAB Team (GLT): (architect + artist) will work as a curatorial team that will be in charge of introducing catalysing inputs at different stages of the project.

2_The process activates through several specific actions: a media campaign both locally and globally in various formats (traditional and digital media), workshops in Hamar, the launch of an online call for inviting anyone to submit a proposal to be tested in the square and several processes of communication and Internet networking.

3_ the different proposals for activities and actions to be carried out in the square will be received through the OTS_DL or by contacting the LLT. These collected ideas will be published in the database of the web and also displayed on a physical screen on the façade of the OTS_PL. Proposals must be in accordance with criteria defined by the GLT and will also have to include a detailed budget.
4_These proposals will be voted on a continuous basis and comments on them will also be a continuous feedback, so as to establish a ranking of the most valued and supported ones in real time.

5_Periodically (every six weeks) the three most voted ideas will be selected and will take place as they are or as a hybrid solution according to the budget available. This process is repeated eight times during a year. The implementations will be monitored by the LLT and the GLT, and will be developed and produced by the citizens of Hamar or by the teams who submitted them.

6_These real scale mockups will be part of a new database involved in the following process.
7_By the end of this open process, a technical committee composed of local authorities, experts, local citizen representatives, web participants and the GLT will convene. This committee should discuss and define the process (and design) to a maximum of three options to integrate the most valuable and interesting ideas made in the previous phase.

8_These three options will be voted through an open process and the final action to be realized will be chosen as a result of the process.