The heart of Asunción starts beating 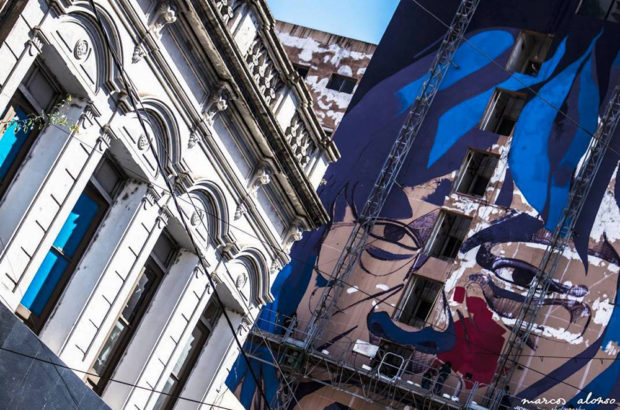 A few months ago we ended one of the longest, intense and complex projects our office Ecosistema Urbano has done so far, the Masterplan of the Historic Downtown of Asunción, awarded in an international competition and developed with a multidisciplinary team between Madrid and the Mother of Cities, Asunción.

The influence of the Master Plan on the city’s urban and social form began during the participatory process, which supported the project’s draft, when a presidential decree created the Council of the National Government for the CHA Plan, a coordination platform composed by relevant institutions for the future of the Historic Downtown.

As part of the project’s final stage, an Exhibition in the Casa de la Independencia museum in Asunción contributed to make the CHA Plan public and also formally present the project to its citizens. The most spectacular piece in the exhibition was a huge model of the Historic Downtown on the wall, which since then, it has been an essential part of the visit to the museum. The model, also synthesizes the 10 institutional strategies, 100 actions and 40 pilot projects* proposed for the CHA Plan, in a global and unique vision that allow us appreciate the complexity of all the proposals together as well as presenting visually and in a smaller scale the intervention. 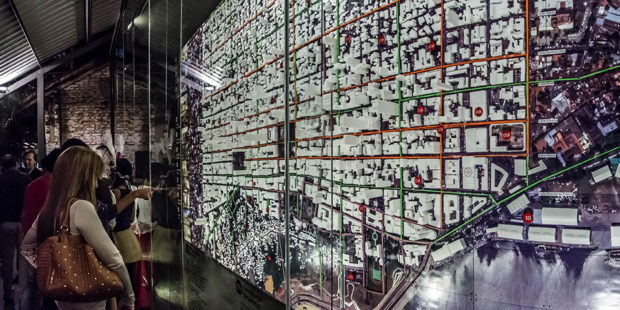 A few months later after the process ended, the AsuLab (Asuncion Laboratorio Abierto – Open Laboratory Asuncion) was created; a tool for change proposed by the Master Plan and designed by the Technical team of CHA Plan as a necessary element to guide the first steps of the CHA Plan.

Meanwhile, the new elected city mayor supported the CHA Plan and established the “Dirección del Centro Histórico de la Municipalidad de Asunción” – Historical downtown administration of the municipality of Asunción, which in coordination with AsuLab, proactively joined the project and materialized some of the most important pilot projects defined under the Master Plan, beginning with the strategies “Green corridors” and ” Blind walls interventions “. 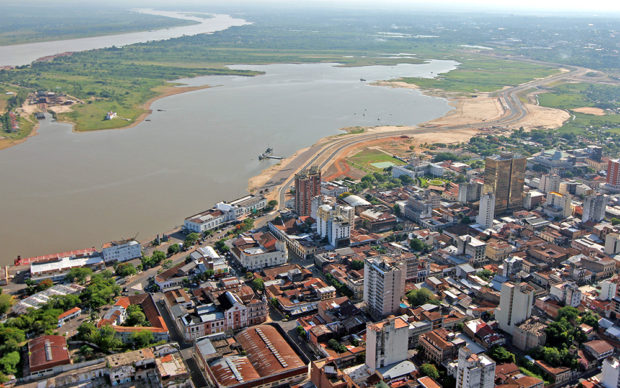 There are many tall buildings in Asunción, most of them built between the 60’s and 70’s and north oriented or, in other words, to the Paraguay River. The south, east and west façades of this constructions frequently have very few windows and had led to countless blind walls in the city. Its the abandonment of these walls that is often related to the negative perception of the urban area of CHA. 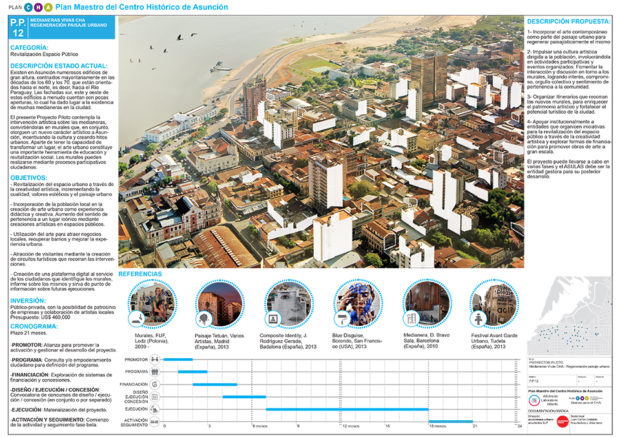 The pilot project of “Blind walls interventions” foresees the artistic intervention on these spaces, transforming the walls into murals that will give an artisitc charactere to Asunción and encourage culture by creating new city landmarks. Other than having the capacity of transforming the place, urban art is an important tool for raising awareness, education and social revitalization.

We are happy to share the most important progresses of the CHA Masterplan. Last August, the blind walls of Asunción started to beat. The citizens uploaded and filled the web with pictures of the massive, synchronized and colorful transformation of their city with 40 artistic interventions.

The artistic initiative, called “American Heartbeat” was organized by the Historical Downtown administration of the Municipality of Asunción in collaboration with Latido Paraguay, represented by Paraguayan and graffiti artist Oz Montania.

The Festival Latinoamericano de Arte en la Calle “Latido Americano Paraguay” has gathered 40 artists (9 local and 31 international artists) with the central motif of “Discovering Paraguay” and having as a common starting point for all artists the flora, fauna, indentity, folklore, tradition, legend, history, intensity and color of the Precolombian Asunción.

In the words of the artistic curator of this initiavite, Oz Montanía: “The Latido (beat), rather than a mural painting event, is a practical exercise to imagine our dream city. 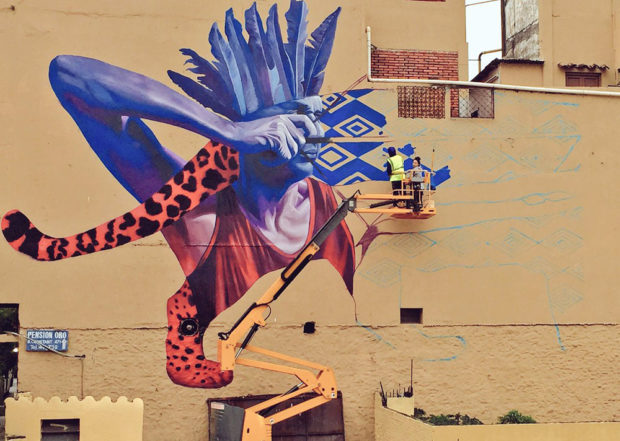 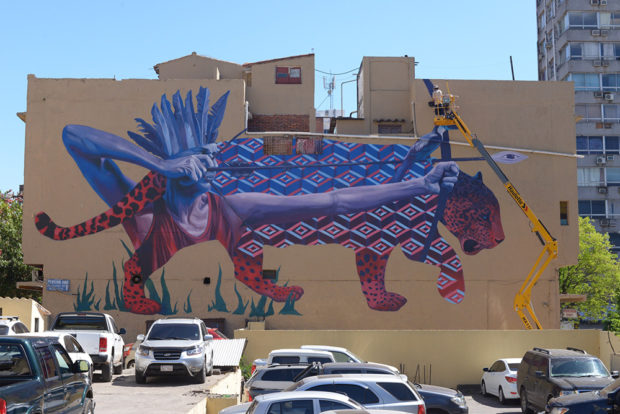 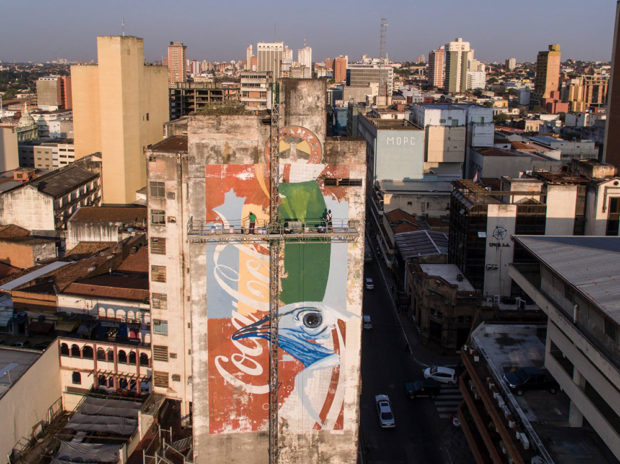 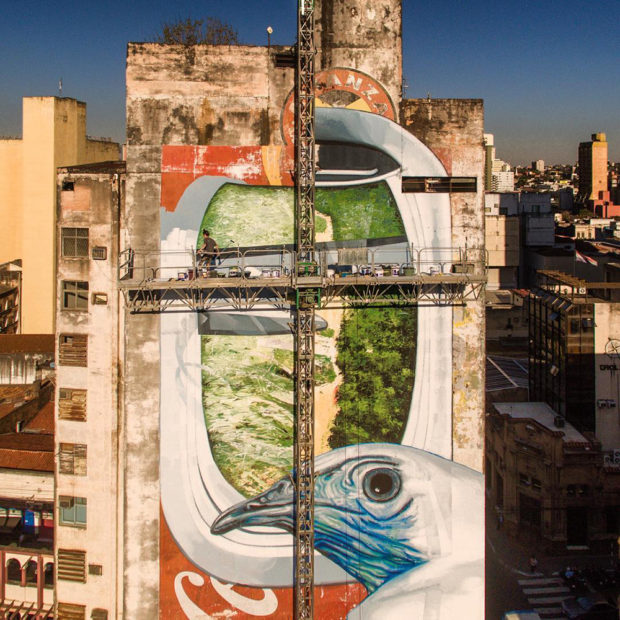 A bare-throated bellbird in the gigantic mural by the new yorker “Gaia” on Olivia Street / Photo: Juan Carlos Meza @fotociclo 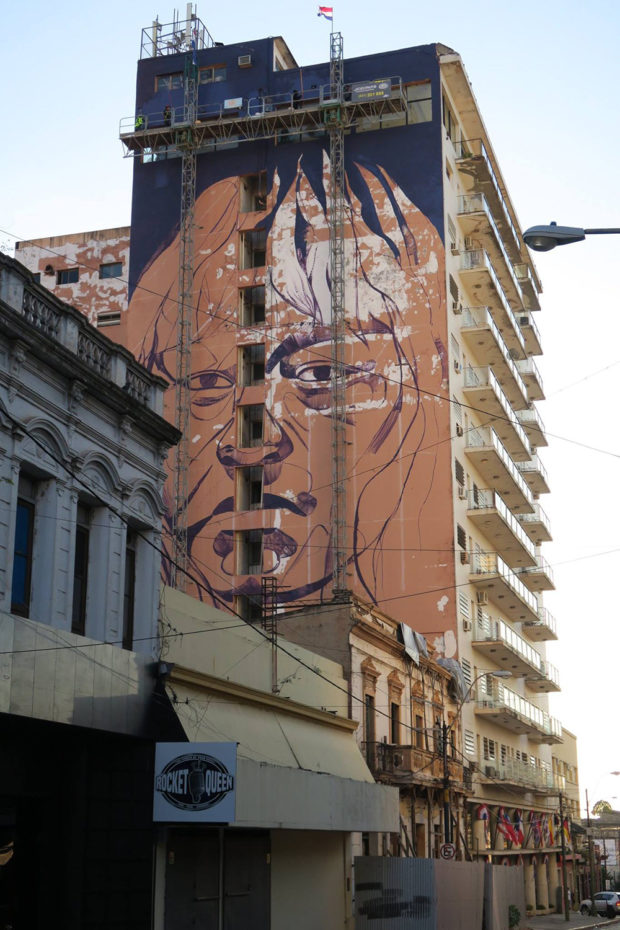 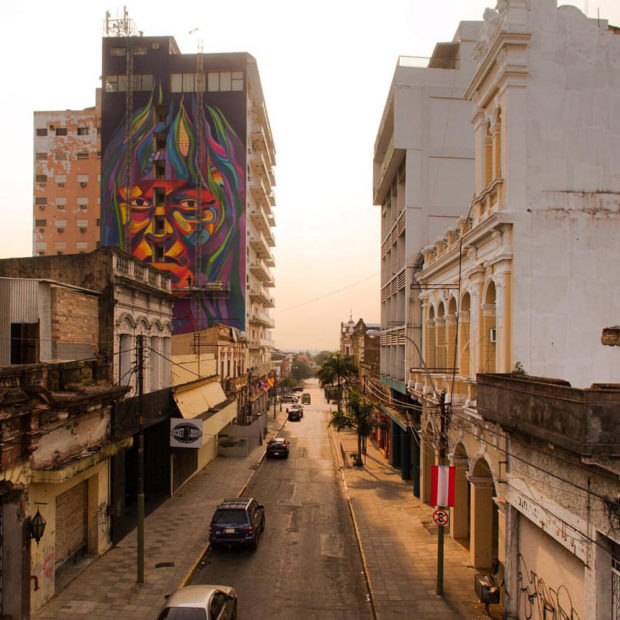 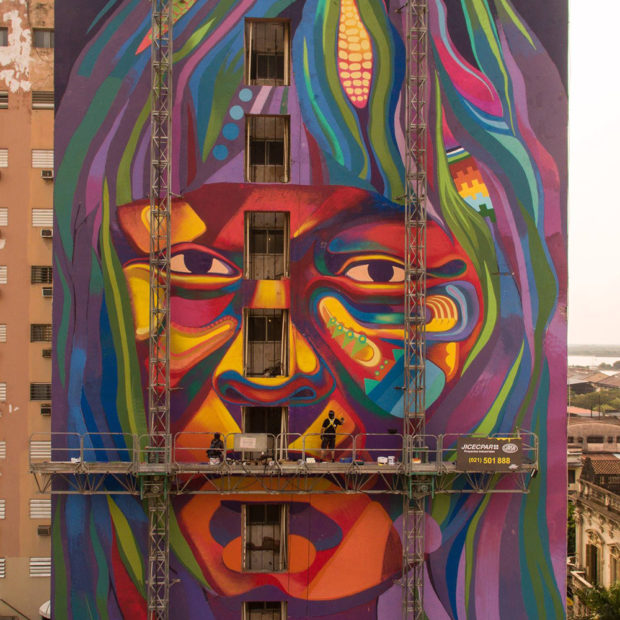 This revitalizing action, makes new situations with multiple meanings and side effects: it incorporates contemporary art as part of the urban landscape to regenerate the view of the CHA, aims to promote an artistic culture, involving the citizens in different types of activities and participatory events that work along the initiative, and encourages interaction and a collective discussion about the murals, making interest, commitment, pride and a collective feeling of belonging to the community. 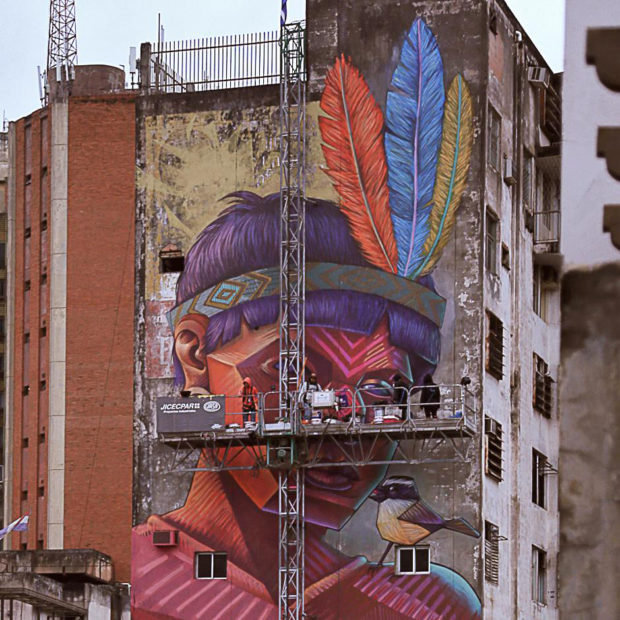 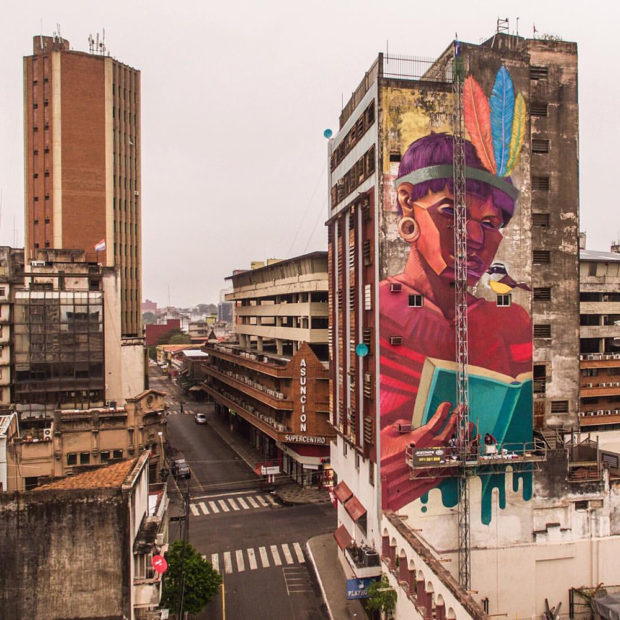 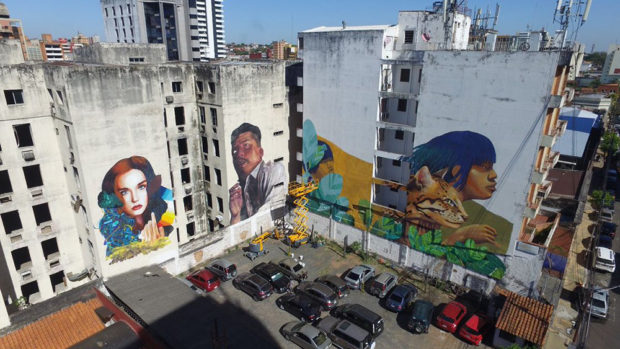 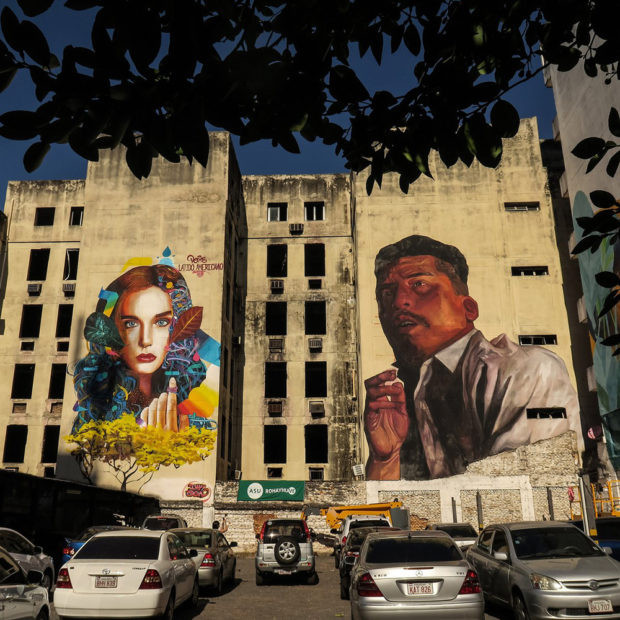 Mural by Ever on Alberdi street between Haedo and Humaita streets / Photo: @latidoamericano 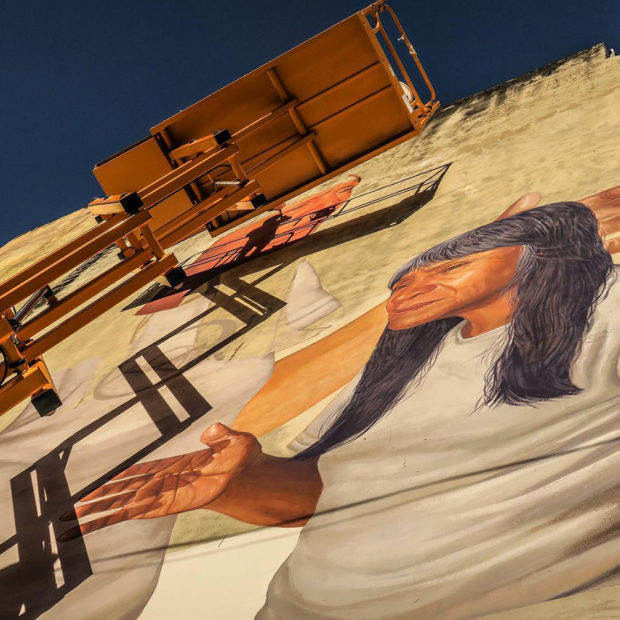 As planned in the pilot project “Blind walls interventions”, the valuable side effects for the CHA have multiplied exponentially as the artistic interventions advanced, organizing new itineraries to explore the city and discover in real time the transformation of the blind walls.

One of the walking tours #fotocaminatalatido was guided by Juan Carlos Meza, a great and proactive paraguayan photographer from Asunción. Over a few hours, more than 200 professional and amateur photographers staged a photo expedition around the historic downtown of Asunción, stopping for minutes to photograph the murals. With the camera or cellphone in hands, the participants surrounded and photographed the artists while they continued working on the walls. 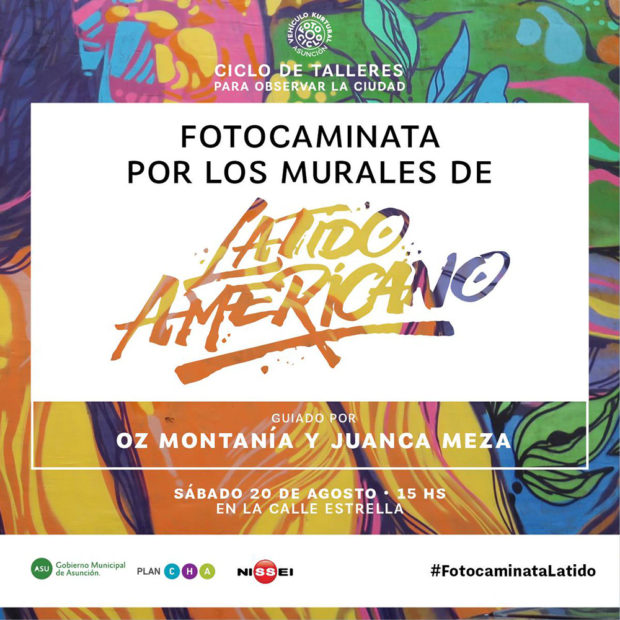 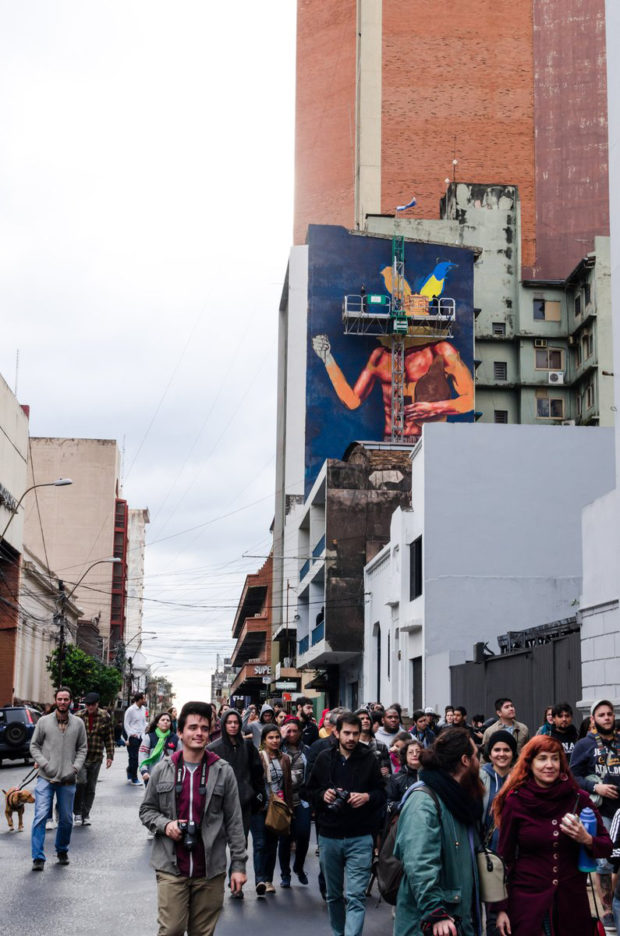 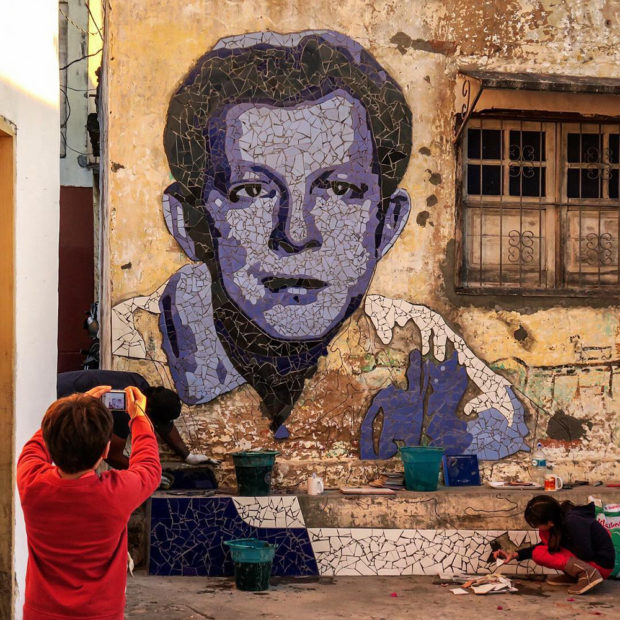 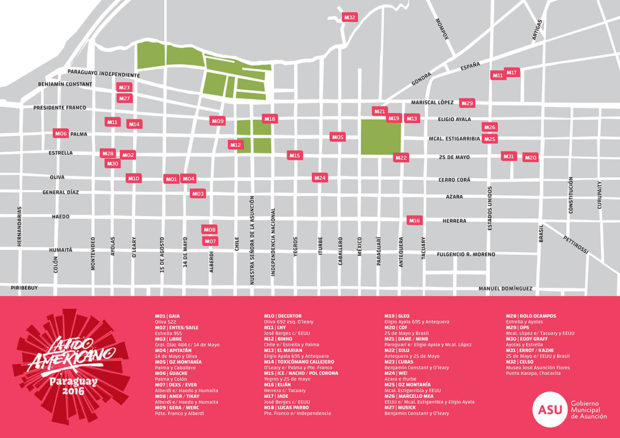 Guide map with the location of the murals in CHA

“Thanks for coloring this small world” shared @angieblue26 a few days ago in her twitter account, summing up the feelings of many citizens of Asunción that rediscovered their downtown. 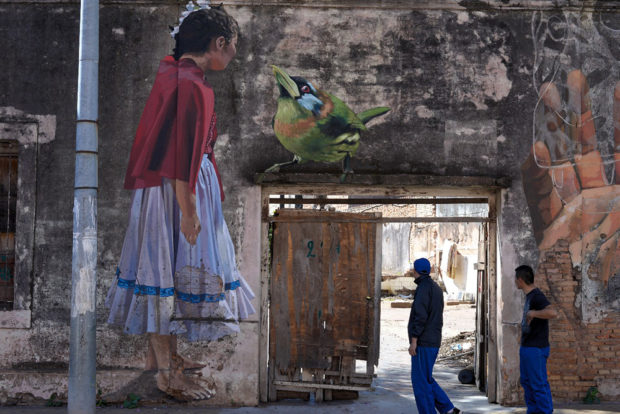 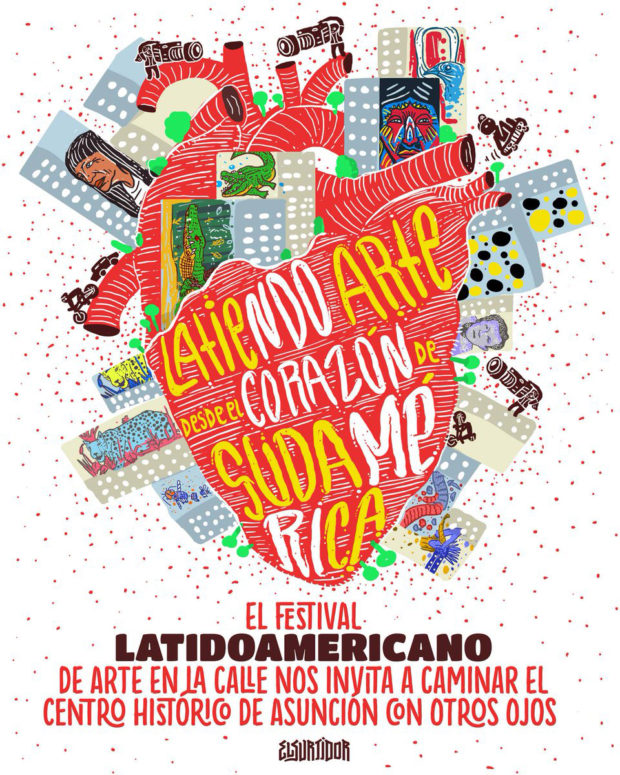 Some of the artists involved:
Aner and Tikay from Chile; Apitatán from Ecuador; Celso from Puerto Rico; Cofe, Dame, Elián and El Marian from Argentina; Dj Lu, Entes and Decertor from Peru, Gaia and Gera from the US; Guache from Colombia; Binho from Brasil, among others. And the paraguayan artists: We!, Rolo Ocampos, Eddy Graff, Cubas, Marcello Mea, Khaze, Errot, OPS, and indeed, Oz.

* The Pilot Projects are urban interventions intended to be demostrative, with high impact within a short time and under budget. With the purpose of pointing out certain aspects of the historic downtown that are part of the Master Plan in order to launch distinct signals of change. One of the main targets is to identify opportunities and experience new ideas that encourage local authorities to develop new possibilities for action, new financing instruments and a more comprehensive approach to the problems.

Here you can read the Spanish version of this post