Public Space for the Extreme: Ventilation Ven·ti·late. The natural or mechanically induced movement of fresh air into or through an enclosed space.

Natural ventilation was widely used in traditional architecture to improve the bioclimatic comfort of tents first, and then rooms and whole houses, before the advent of air conditioning, natural ventilation was one of the few techniques available to lower the temperature of a closed space exploiting the cooler winds blowing outside or just the movement of cooler air.
The first and most important examples of architectures using the wind as a cooling medium to improve indoor environmental conditions are found in Persian traditional architecture, the badgir (or mulqaf in arab) is an extraordinary piece of spontaneous design, using only the natural flow of the wind – often combined with many other bioclimatic arrangements like thick insulating walls, very packed constructions, small apertures, etc. – it is capable of cooling and improving the climatic comfort of a house in the torrid deserts of Iran and the Arabic Peninsula. 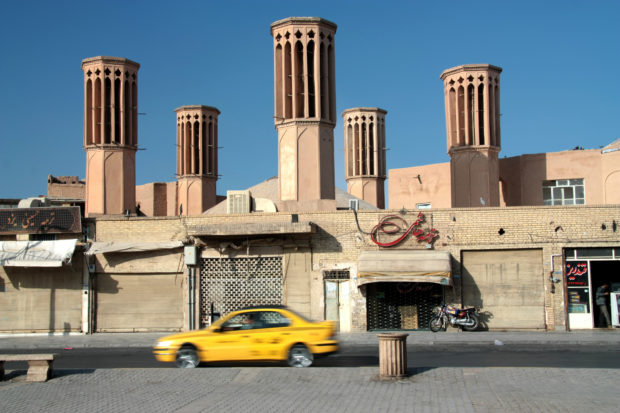 The badgir, in arid and dry climates is often combined with the use of water to implement evaporative cooling improving even more its cooling capacity and generating cool breezes even without the presence of winds outside, in this case the thermodynamic effect is not based only on ventilation but also on convection. The windtower, or literally windcatchers, can be found as a traditional element in most of the modern Islamic world area with few regional variations, its usage has been consistent through the ages but in the western gulf region it almost disappeared due to the rapid urban growth and modernization of the cities, in Bahrain, for example, only one ancient badgir remains.

The traditional usage of windcatchers has been nowadays reinterpreted in many ways using both natural and mechanical aided ventilation, the great Egyptian architect Hassan Fathy used it widely in his buildings, but for sure, one of the best practice (at least if we consider this research public-space oriented) is the Qatar University Campus designed by the Egyptian architect Kamal el Kafrawi (with the collaboration of Ove Arup) and opened in 1985. In this groundbreaking project the use of windcatchers is systematic and characterizes the whole campus. Based on an octagonal and square plan geometry, the low rise concrete modules the projects makes large use of natural light and natural ventilation through the hundreds of windtowers that top every module and mashrabiyas to protect the classrooms from sunlight and permit the air circulation. The aggregation of the modules juxtapose classroom modules, halls and rest spaces enriched with vegetation and constantly ventilated through the roof. In contemporary architecture, and specifically in the climatic improvement of public space, the use of ventilation devices, especially in high-humidity environments is quite a new thing and mechanical ventilation is generally used as a cost-efficient way to overcome tropical humidity especially in southeast Asia. Two projects are to be considered references in this case, one is Will Alsop’s Clarke Quay in Singapore and the other is Ecosistema Urbano’s Air Tree for the Shanghai Expo 2010.

In this 2006, project, Alsop is called to regenerate the Clarke Quay riverfront and the market with the objective of drawing tourists and locals back to the old Singapore’s waterfront. The most interesting thing of this bold design is certainly  the bioclimatic intervention in the market, refusing to create a closed shopping mall the architect designed a mitigated semi-external space, protected from frequent rains and with improved environmental conditions. The market intervention is composed by two main parts, the roof and the ventilation devices.
The roof is constituted by giant umbrella-like structures covering the internal streets of the market, the ETFE canopies covering the streets offer protection from both the rain and solar radiation that in this climate are equally detrimental for the use of public spaces. This roof maintains the temperature in the central square and the four streets of the market at around 28º Celsius when outside temperatures can rise up to a mean of 31ºC. But the most important and innovative feature are the “whale-tail” shaped ventilators placed in the vertical supports of the roof structure. These big fans have a fundamental role in maintaining good environmental conditions in the market streets, considered the high relative humidity level(year average 84%) ventilation is the only way to make the air tolerable. Using slow rotation fans these sculptural objects blow a constant breeze in the lower part of the market favoring the natural evaporation cooling of the skin. The Air Tree that Ecosistema Urbano realized in Shanghai for the 2010 Expo is a prototype of an intervention in contemporary urban space. It is conceived as a new kind of public space, a technological urban furniture, which also serves as a virtual node of connectivity where users can actively interact. Its different technical layers enables multiple final configurations and a myriad of intermediate positions (opaque, translucent, transparent, bright, interactive, open, etc.). Different textiles for video projections allow an unlimited combination of scenarios adaptable to citizen needs. Its appearance can be transformed over the daily cycle, as well as through the different seasons. By sensors it is connected in real-time with the climatic conditions of Shanghai, constantly adopting the optimal physical and energy consumption configuration to generate climatic comfort for the citizens.

To improve climatic and environmental conditions, that in Shanghai basically have to deal with high temperature during summer and high relative humidity during all year, a 7.3 m diameter fan suspended by a tensegrity structure in the center of the space, at a height of 11.5 m provides air flows inside the space. Through a telescopic system the fan can be lowered several meters to come closer to the ground. The exact position and speed at each moment is determined according to the instant climatic conditions of the environment, real time monitored in the surroundings of the structure. Together with the variable configuration of the tree’s skin the flow of air generated with the fan can effectively improve the environmental conditions inside the tree.