Public Space for the Extreme: Shading 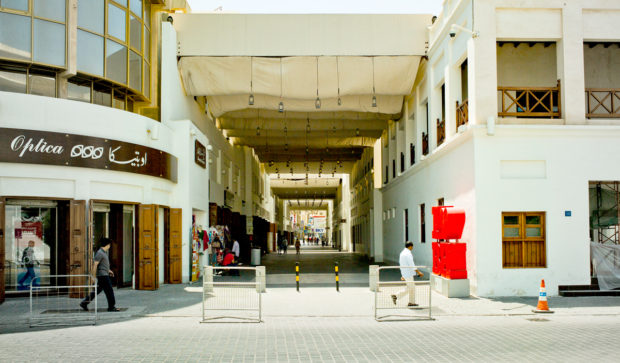 Sha·ding, to cover or shield from direct sun exposure […]

Direct solar radiation has the largest impact on the comfort in open spaces, the enormous energy of the sunlight can be useful in certain seasons and cold climates but is generally excessive and certainly unwanted in hot and arid climates. Sun shading, and sun protection, has been, and still is, the fundamental way to improve a public space bio-climatic behavior. Reducing the solar radiation that reaches the people or gets reflected by the ground, both by the means of vegetation or shading artifacts, is the most efficient way to reduce temperature and it is widely used at all latitudes from temperate areas to arid ones.
In this short post we are going to present some projects that we consider interesting because of their use of shadow or shadowing devices, we tried to stick to projects that make use only (or mainly) of the shadow leaving other mixed projects for later.

A milestone project in the use of shading devices to create a bioclimatic space in the gulf region is the Hajj Terminal part of the King Abdulaziz International Airport, designed by the NYC based firm S.O.M. architects. The use of tensile structures, wasn’t surely something new at the time (i.e. Frei Otto tensile structures for the Olympic games in Munich date back to 1972) but the scale and the effectiveness of this project made it one of the best and most replicated examples of open shaded spaces. Although not being a true public space the Hajj terminal is quite peculiar, designed to host the massive flow of pilgrims that pass by during the ritual pilgrimage to the Holy Mecca it is composed of two parts, the first is a fully air-conditioned terminal where the offices, customs, and luggage claiming areas are hosted and the second, and far more interesting part, is the famous open space tent-like structure that hosts the pilgrims until their departure to the Mecca (the waiting time can be up to 36 hours). The whole structure covers more than 42 hectares (60 football fields), and it’s composed by 210 tent-shaped cones made of Teflon coated fiberglass fabric arranged in modules of 45,72m (150ft) with an oculus on the top to allow the heated air to escape. Published data demonstrate how effective the design is, reflecting roughly the 76% of the solar radiation, the structure can maintain a notable 27 ºC temperature under the tent even with temperatures reaching up to 54ºC outside providing also a soft diffused light to the whole terminal.

In the late 80s, for the International Expo that took place in Sevilla, the Spanish architect José Miguel de Prada Poole designed the main pavilion for the events in the exhibition area. The “palenque” although resembling the Hajj terminal for the shape of its tensile roof is a much more advanced piece of bioclimatic architecture, Sevilla’s climate can be really harsh during summer and the designing teams put a big effort on the climatic comfort of both the pavilions and the open spaces. The palenque sits in between a pavilion and an open space, it was the main arena for shows and other events and it was, substantially, a covered open space filled with finely designed mechanisms to guarantee a high degree of climatic comfort even during hot summer days. The design used both natural (the pavilion had no walls at all, only vegetation enclosed it a bit) and forced ventilation and air conditioning to ensure the best possible conditions to its visitors but in this case the most interesting part it’s its cover. The “palenque” during the Sevilla EXPO in 1992

In this project the bioclimatic design of the Hajj terminal was substantially improved, at a smaller scale indeed, the oculus was substituted with an improved ventilation topping cone and to decrease the temperature of the fiberglass fabric under the Andalusian sun hundreds of watering nozzles were installed around the cones. The water vaporizers were computer controlled activating only when the temperature and humidity rose over a certain value, their function was to continuously wet the roof with a fine mist, the quick evaporation of the water subtracted heat from the fabric and contributed to lower the transmitted heat to the underlying arena.

But shading can also be declined at a temporary and smaller scale. An extreme example, in this sense, is Asif Khan’s Public Space Shadow Canopy Kit, a portable kit that can be easily distributed and installed in any place without any tool or machinery, it can be moved, can be dismounted and installed in another place or can create a successful temporary public space. This extremely low-tech and inexpensive piece of design is particularly meaningful for informal areas, unused or temporary spaces that can easily be converted in playful shaded spaces.

The Bab al Bahrain pavilion is a temporary public space designed by Noura Al Sayeh & Leopold Banchini in one of the most symbolic and historic sites in Manama, Bahrain. The pavilion had an extraordinary success during its permanence and it was constantly used and visited, it held events and even workshops. It’s success can be attributed to a good mix of factors, the first one surely being the special value of the place and the second one the it’s good bioclimatic design based mainly on shadowing.
Bab al Bahrain square was one of the main public spaces in the city, very close to the main historical souk and still connected to a natural pedestrian network, it is a privileged place but it slowly lost its status and it has been converted in a roundabout often crowded with cars and very unfriendly for the pedestrians. The first good virtue of this project is the creation of the public space itself, closing the crossing to the traffic and giving back this historical place to the citizens, although it was only for a limited time this demonstrated the power of this kind of intervention and the need for quality public space that this city has.

The second important virtue was the design of a comfortable public space using only the perks of the site, a minimal light structure and a low tech element to protect from the sun. Based on a regular grid of thin steel columns the project is basically made by its “canopy”, a light sun-reflecting fabric (generally used in greenhouses) that reflects most of the energy of the sun giving to the place a nice diffused illumination. To make this design really effective the architects took advantage of a large fountain already existing in the site, the fountain with its fresh water contributes to lower the temperature of the air crossing the pavilion and also generates a cooler spot in the middle of it favoring the creating of a light breeze.

Previous posts of the series: