Four years ago Ecosistema Urbano held a workshop in Manama, Bahrain, to revitalize and improve the public space around the Bab al Bahrain souk, an area that is historically important for the city but that it is nowadays a mere street crossing rounded by parking lots, without any tree or shadow. The workshop was held in a remarkable temporary pavilion that for a few weeks converted a roundabout into a vivid and often crowded space, a light textile roof offered shadow and protection to the participants contributing to the success of the workshop. The workshop has been also the occasion for us to start a long term project on Bahrain, under the auspices of the UNESCO Arab Regional Center for World Heritage we started a research project mainly focused on the city of Muharraq, its antique public spaces and how could we revive and improve them. This research has been carried on during 2014 and 2015 spring semesters with the GSD-Harvard students and it emerged immediately that one of the main conditions to make use of the public space in Muharraq was the improvement of the extreme environmental conditions that, combined with a low quality design of the space, prevented and discouraged the people to go out and live the remaining public spaces. 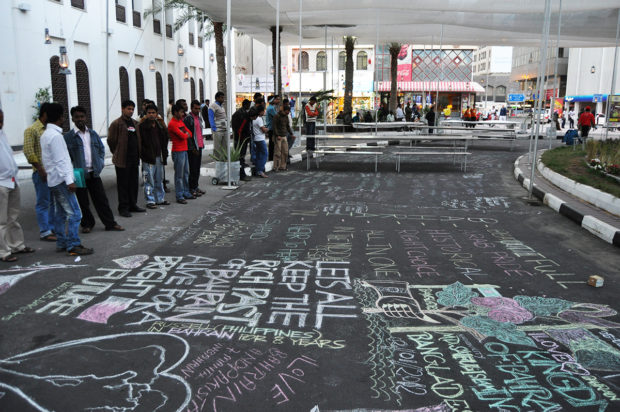 Following this same path of research we are now working on a publication to finally release all the knowledge we have accumulated during these years of work, teaching, and research in the form of a book. Our objective is to address the problems that the designers have to face every time they are called to design a public space in an area with a particularly extreme climate (make it extremely hot, arid, tropical, etc.), we would like to provide decision makers, designers and citizens with a solid base of knowledge to help them consider new technologies and concepts to design public spaces optimized for a certain climate, responding to bio-climatic needs and site specific conditions making it more livable, comfortable and accessible.
Beginning today, we start a series of posts dedicated to the design of bio-climatic public spaces, we will periodically publish part of the content we have produced for the book exposing the problems and the good practices that we have found, our concerns, the work of our students, etc. We would like to foster a debate around these themes that might help us developing our book but also raise the awareness around the climatic comfort in public spaces which is a true challenge for architects and designers in many areas of the world.

Since the beginning of civilization and urbanization, humanity has adapted its form of settlement and building to the specific climatic conditions of the area as it is known that climate influences, in a way or another, every human activity and that some areas in the world are way less hospitable than others. Already in the 5th century, the roman philosopher Macrobius (and later Sacrobosco in the 13th century) divided the “globus terrae” into five areas, two of them denominated “temperata habitabilis”, approximately corresponding with our temperate latitudes, two polar areas, named “frigida septemtionalis inhabitabilis” and “frigida australis inhabitabilis” and finally a “perusta inhabitabilis” (that might be translated into “scorched by drough”) corresponding with our tropical and equatorial area.

Design a comfortable and vivid public space is a challenge everywhere in the world mainly because of social and cultural reasons but there are areas where this task is even harder because of adverse and extreme climatic conditions. Outside of the few temperate areas where climate is usually mild (with seasonal variations) in the rest of the world extremely hot or cold climate deeply conditions the possible use of the public space. Tropical and arid areas are both characterized by constant hot temperatures, during the 12 months the average temperature is always above 18°, with high humidity and precipitations in the tropical areas and almost no precipitations in the arid ones. The specific object of this research is the densely urbanized area in the west coast of the Persian Gulf, this area is characterized by an arid, desertic climate, heavily influenced by the shallow waters of the gulf and by the monsoonal phenomena that creates a specific climate condition that is quite hostile for outdoor (and even indoor) activities. Persian Gulf climate is characterized by two main climatic periods, one goes from June to September (summer) and one from December to March (winter) separated by two transitional periods. While winter is quite mild, and weather conditions are acceptable, during summer, in Bahrain for example, temperatures rise up to an average of 38°C with relative humidity ranging from 40% to 80%. Under these conditions it is clear that a bioclimatic, adaptive, design of public space is necessary if we want to guarantee a continuous use throughout the year.

On the other side, the tremendously fast and often chaotic urban growth of many cities in the Western Coastline of the Persian Gulf has caused a wide transformation of the existing urban fabric and an enormous horizontal expansion, the result of this urban growth is a uniform, so called generic, city. The typical western gulf city model is characterized by a tall urban core and a constantly growing generic-block-based periphery. From a certain point of view the architecture of the skyscrapers in the urban centers is the most exotic and technologically advanced but it is also totally introverted, the exterior space is a leftover space, necessary to separate the buildings but nothing more than that, the exterior space is generally not interesting nor designed. Architects efforts are all about creating an indoor exciting and comfortable space, always sealed and always kept cool with the help of massive air cooling machines contributing to an enormous increment of the carbon footprint (in 2008 UAE had an ecological footprint of 2,5 Ha per person, the highest in the world; and gulf area countries count for 6 of the first 10 positions in the global ranking for CO2 emissions).

The second key factor that characterize the gulf cities is the constant and ubiquitous dominating presence of the car, the vast majority of displacements are made by car (although there are interesting plans to implement various railway systems), and in the exterior space the presence of the human being is almost not contemplated. In downtown areas, designed to the detail, the presence of the pedestrian is minor and almost discouraged by the means of an uncomfortable public space that doesn’t generally consider the specific climatic and physical conditions of the area.

In the periphery, a place even more dominated by the car if possible, the absence of a conscious spatial design exiles the pedestrian even more, if there are no footpaths nor pedestrian friendly areas clearly there won’t be any urban activity.

A third fact that has a strong influence over the use of public space in the western gulf cities (after urban design and mobility) is the new social composition. During the oil and post-oil economic growth two main migrations occurred: many US and European highly educated expatriates established in the gulf’s main financial centers and contemporary also vast armies of poor laborers from the Indian subcontinent established in the same cities creating a new, peculiar, social strata that practically never mix. Each one of these social groups has different cultural background, different religions, economic status and even legal rights, adding more problematic to the design of public space in the region, to have a clear idea in most Arabic countries expats count for the 50% of the populations and in some areas the proportion is one native to five expatriates.
A fourth factor that deeply influenced the form of the city after the discovery of oil in the ‘50s is the ongoing and yet unresolved conflict between traditional architecture and western, modernist design . The rapid deviance from cultural roots caused an abandon of traditional model and an early a-critical adoption of generic western models, although a more regional consciousness has emerged in the last 30 years this process is far to be concluded.

Here the second post of the series: Public Space for the Extreme @ GSD-Harvard