plug_in at the XXIII WORLD CONGRESS OF ARCHITECTURE TURIN 2008_ UIA 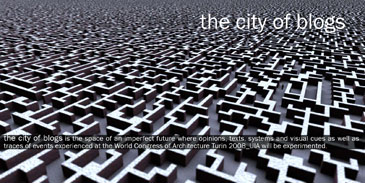 plug_in is a cultural association founded in 2003. It operates as an experimental workshop used by members Emanuele Piccardo, Luisa Siotto and Alessandro Lanzetta to promote the propagation of architecture and contemporary visual arts by inviting the community to actively participate in events and workshops organised in various locations.

plug_in is an open network that encourages the cooperation among the different design cultures and processes operating in the contemporary age. It also promotes a digital magazine, archphoto (www.archphoto.it), as well as other editorial ventures that explore and propagate architectural culture with a varied and transversal approach incorporating a multiplicity of theoretical disciplines related to the multimedia and the visual arts.

plug_in is at Architektonika, the International Exhibition of Products, Projects and Processes for Architecture, Construction and Design that is one of the highlights of the XXIII World Congress of Architecture Turin 2008_UIA.

plug_in has been commissioned by Architektonica to develop The city of blogs, a project conceived in cooperation with the online communication company Nelweb as a platform for cultural production that promotes debate and becomes a process of open knowledge and exchange.

Live from the World Congress of Architecture Turin 2008_UIA, “The city of blogs” will become the focus of debate, expression and interaction and give a literal and contemporary meaning to the Congress’ official theme – “Transmitting Architecture“. This space will be open to anyone who is willing to produce contents, propose assessments, narratives, critiques. Explicitly devoted to the blogs as alternative forms of publishing, it will evaluate their potential to create debate, produce news and transmitting opinions in a context that is completely separate from the traditional media. The contacts with the web will be kept by a Facebook group, a tumblr and a feed aggregator that will gather all the contents produced by The city of blogs.

The city of blogs radically dissociates itself from contemporary architectural culture.

The city of blogs is the space of an imperfect future where opinions, texts, systems and visual cues as well as traces of events experienced at the World Congress of Architecture Turin 2008_UIA will be experimented.

The city of blogs is a free and democratic space where every contribution is welcome, received and made use of.

The city of blogs is a place that will activate a process where the use of new technologies as elements propagating knowledge is finally central. From this place, impressions and opinions will be propagated live exclusively by using devices such as the blogs, microblogs, social networks, broadcasts and any kind of innovative process proposed by the participants.

The city of blogs is a container that is already content: free, radical and open to different forms of expression that use the web; in itself it is a reflection on major contemporary topics such as the use of communication in architecture, the relationship between architecture and society and the role of the designer.

Within this space, visitors will have the opportunity to contribute to The city of blogs, watch the interviews with the protagonists of the UIA Congress made by Emanuele Piccardo for archphoto magazine (www.archphoto.it), browse plug_in’s publications such as “soleritown”, the photographic survey (made by Emanuele Piccardo and Filippo Romano with the support of the Architectural Association of Turin and the Province of Turin) about Arcosanti, the city that Paolo Soleri – who will be at the Congress on June 29 – is currently building in Arizona.
On this occasion the documentary about Paolo Soleri as well as other architecture videos produced by Archphoto since 2002 including interviews to the main players in contemporary architectural and art culture will be visible every day for the entire duration of the Congress at plug_in’s stand.