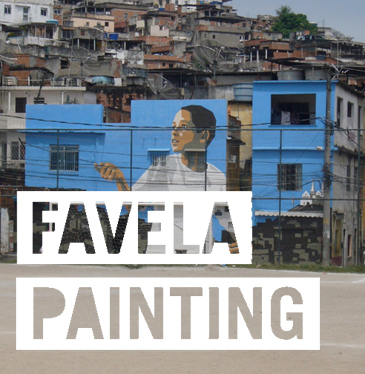 FAVELA PAINTING IS A PROJECT BY THE FIRMEZA FOUNDATION

The Firmeza Foundation creates striking artworks in places where people are being socially excluded. The foundation collaborates with local people to use art to combat prejuducie, create sustainable solutions, and attract the world’s attention.

The artworks contribute to the sense of pride and awareness in the communites where they’re produced. By making each step of the creative process open and community-driven, the foundation cotrnibutes to the education of local youth and motivates residents to improve the living environment in their neighborhoods. 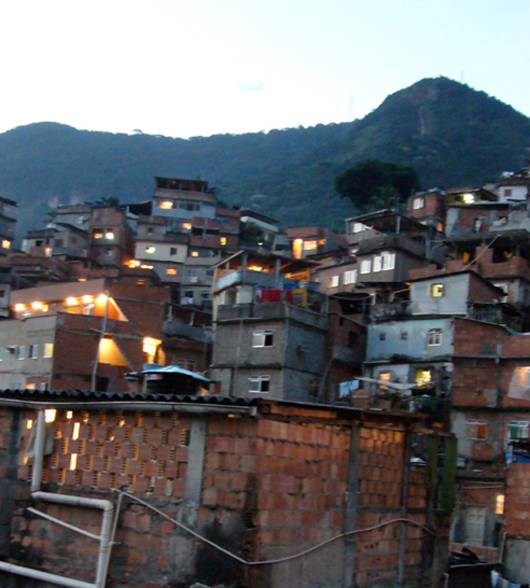 In 2005 we went to brazil to shoot “Firmeza Total”, documentary about the youth in favelas (slums) of Rio and Sao Paulo and the role rap music plays in their lives. We were very inspired by their nergy and creativity, the power to make something out of nothing.

Driving through rio while shooting the film we werw very impressed by the way the favelas are built on the steep rockfaces in prominent places throughout the city. We imagined how this beauty could be accentuated by painting the houses or even a whole favela, depicting one huge image. 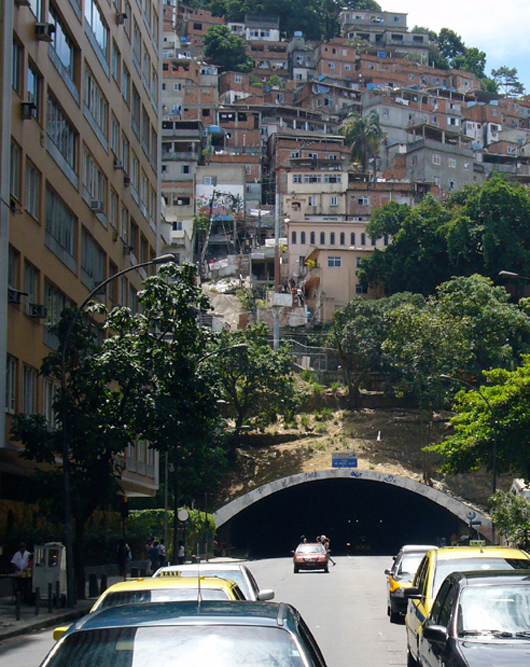 In 2006 we reured to Brazil to do research for this project. We visited many favelas looking for a suitable places to paint, always making sure we knew someone from the area who could show us around.

We found three houses in Vila Cruzeiro, one of Rio’s most notorious favelas. Different designs were presented to the people living in the houses and the neighborhood representative. Everyone liked the design of a boy flying a kite best. Something that all kids do in the favela.

The kids we worked with learned how to use a grid to set up the drawing and different painting techniques. Meanwhile they helped document the process with photography and video. 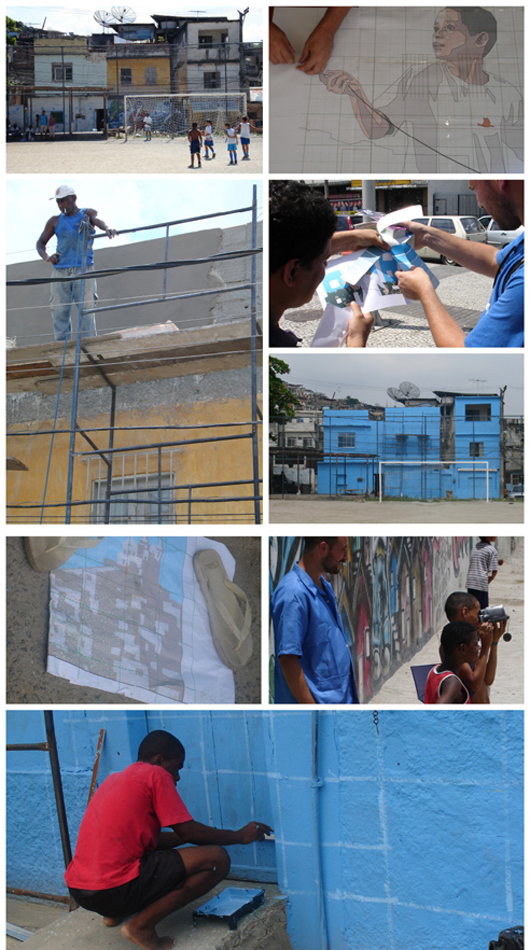 After weeks of plastering, climbing scaffolds, waiting for the rain and shootouts to pass and a lot of painting the mural in Vila Cruzeiro was completed early 2007. 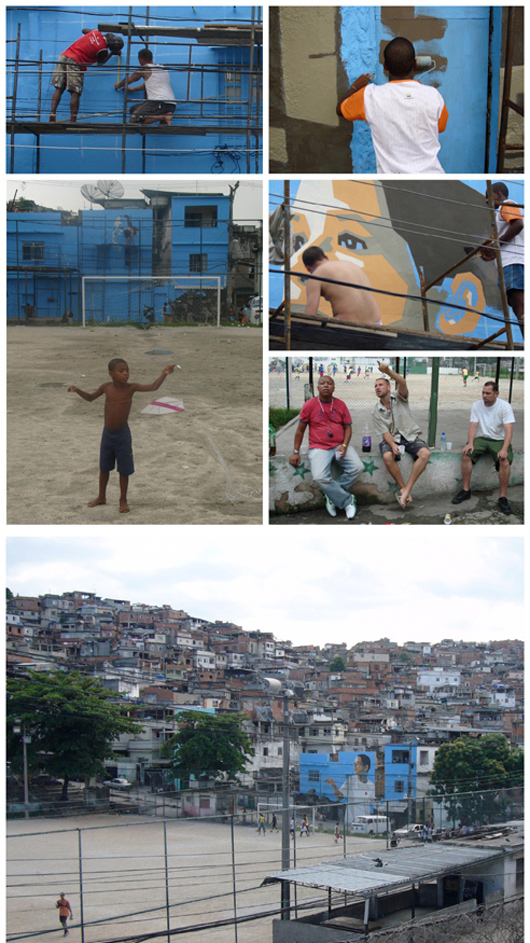 About on fifth of Rio’s population lives in some 700 favelas. Although many have access to running water and electricity, most lack the basics in healthcare facilities and education. Help the children of Rio’s favelas use their creativity to fight social exclusion. Help us make more and bigger paintings. 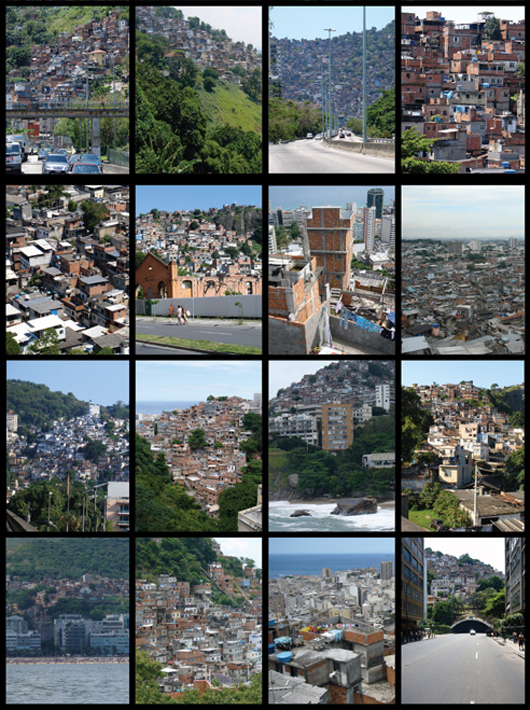 We organise courses in art, design, film and photography with the purpose of providing the youth with the tools to communicate their talent to the world and possibly pursue a creative career.
Favela Painting works in collaboration with local cultural centres where possible, such as the IBISS centre for the youth in Via Cruzeiro. IBISS (Brazilian Institute for Innovations in Social Heathcare) is a local organizsation fighting social exclusion in over 50 favelas in Rio. (www.ibiss.info) 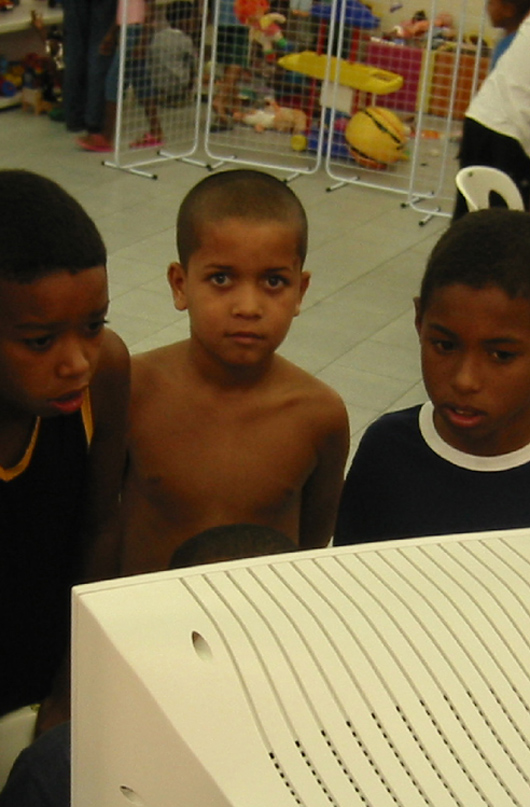 Due to a lack of opportunities many kids end up working for the local drug boss. The kids who painted with us in Vila Cruzeiro wee part of “Soldados Nunca Mais”. A program by IBISS that offers youngsters alternatives to a life in one of the drug gangs.

With the mural, Via Cruzeiro received a lot of positive attention from Brazilian and international press alongside countless online blogs. 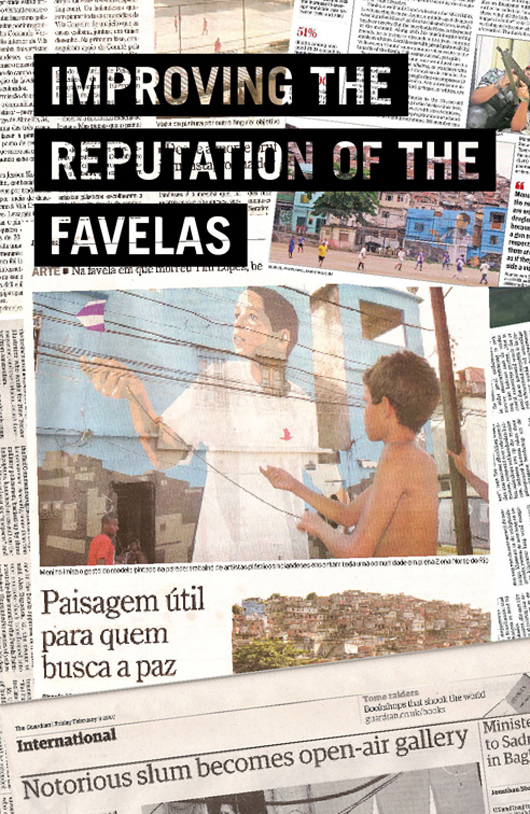 We organise exhibitions with our own artwork and photografy to promote Favela Painting. In 2006 we exhibited in the Boijmans van Beuningen Museum (Rotterdam) and in Studio Apart (Amsterdam) in 2007. 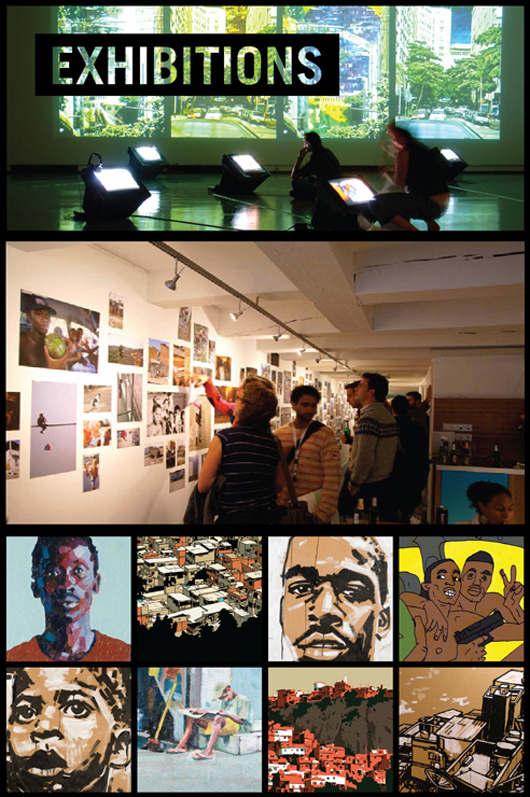 All steps of our project are documented, resulting in a huge library of images. So far we have created documentaries, video-installations and music-videos for local artists.

The artworks that were shown at the exhibitions were auctioned by Christies during different events organised by Favela Painting. 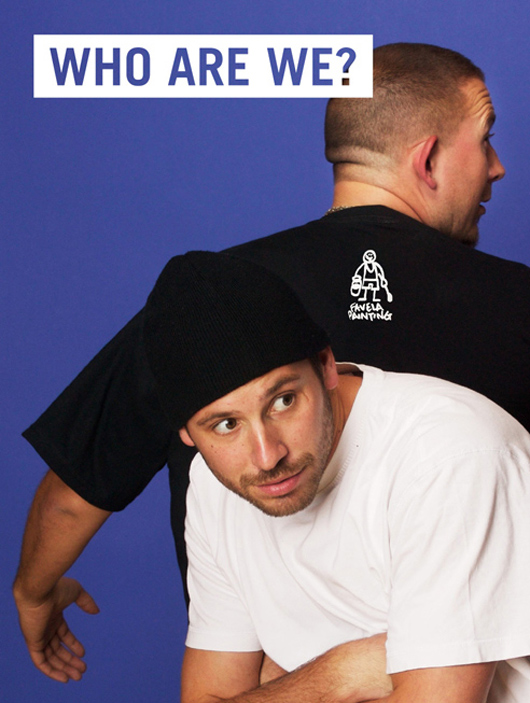 Dre Urhahn
Bron in Amsterdam in 1973. After two years of studing Chinese in Leiden he started working in media. He has been working as a journalist, copywriter and art director and has set up succesful companies handing anything from event-management to television-production.

Jeroen Koolhaas
Born in Rotterdam in 1977, Joroen studied design at the Design Academy in Eindhoven where he followed courses in different media including graphic desig, architecture, product design and animation.
He graduaded as graphic designer but has since been working as an illustrator for the New Yorker and freelance audio-visual designer. His work cab be found on www.jeruniverse.com.