Today’s three projects are focused on the knowledge—or the lack of it—that we have of our environment and the resources we use. Believing that many poblematic behaviors we have are caused by our low level of awareness, these projects try to find a way to communicate effectively their content and to initiate discussions and reflexions which may eventually lead to environmental improvements.

James Perakis’ main target during #networkedurbanism studio was to raise awareness about our own carbon footprint, especially in the GSD among designers which have “a responsibility to create an efficient and responsible built environment.” Through visualizing—both virtually and physically—the energy network and the impact our buildings have on the environment, educating the public, and stimulating the discussion, he writes, we can potentially correct some of our most environmentally problematic behaviors caused by our unawareness. His first experiments involved animation as a medium to communicate how our energy network is operated and how energy is transported from the point of resource extraction to the point of consumption, but this was still too far away from everyday behaviors to produce a change.

Putting into practice the lesson learned with the first animation he used more concrete and immediate data collected from actual buildings to develop the second step of his project. He decided to play an animation presenting Gund Hall—and other Harvard campus buildings—energy consumption in terms of both traditional measurements such as a kilowatt-hour for electricity, and comparative figures such as number of houses powered per year, alongside with a physical device showing real-time emissions.

You can read about the whole project in the #networkedurbanism post and see another James’ interesting video about gas extraction here.

Trashy behavior is a project that investigates how personal decisions can create a network of consequences in our cities. With the help of behavioral science, Josh Westerhold, began considering diverse options for his project until he noticed how hard was to decide where to throw his trash at the Chauhaus, the GSD Cafeteria. He began to observe the pattern scientifically, filmed the trash station during several lunch rushes, and found out that many people showed signs of confusion; a 2010 waste audition also confirmed that, if confused, people chose the easiest option: the trash bin. 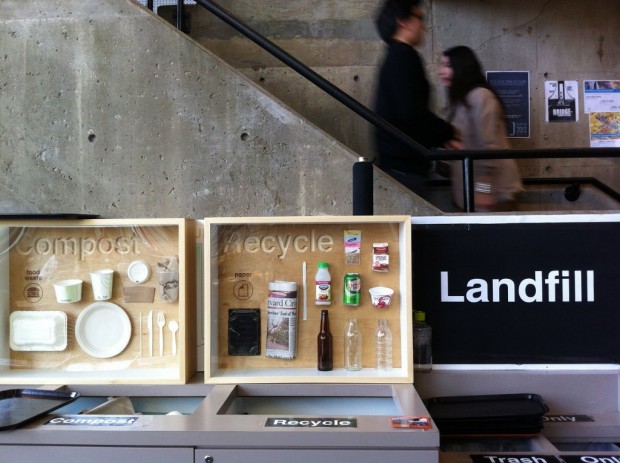 The first step, he says, was to redesign the trash station at the Chauhaus “by simplifying the display to show only what went in the Recycle and Compost bins and attaching the negative association of the giant word—Landfill—to the trash bin.” But it was not enough, using behavioral techniques, he started a public awareness campaign in the GSD using the slogan “Trash is a Choice” and the hashtag #trashlesstuesdays with the intention to prompt the conversation both in the physical and virtual realms. Later he recorded again the trash station at the Chauhaus observing a more efficient use of the station and also conducted a waste audit in the Pit at the GSD noting that “the interventions were successful in producing a material behavior change, as we saw a 40% increase in composting accuracy and a 140% increase in recycling accuracy!”

You can read more about this project on #networkedurbanism.

The water infrastructure is one of the several complex networks that lie under our cities; we don’t know much about them and we seldom question ourselves where does the water—or electricity, or gas—come from neither where does it go after its use. With her project, Karyssa Halstead, wants to enhance the general knowledge about Boston’s extensive water infrastructure and at the same time explore new methods of communicating these concepts. After spending the first part of the semester understanding all of the pieces of the potable water and sewers system in Boston she produced an animation to convey all the information she had collected, the origin of Boston’s water, its average consumption, the energetic costs we face to transport it, make it potable and then its treatment.

Many interesting themes came out from her research but “perhaps most importantly, the understanding that our water usage is part of a larger, connected system is crucial.  Our use affects ecosystems on both sides of the chain, and if the awareness of where our water will go can be achieved, then perhaps we can start to make smarter choices about our usage and what we put down the drain.”

Read an extensive post about the project on #networkedurbanism