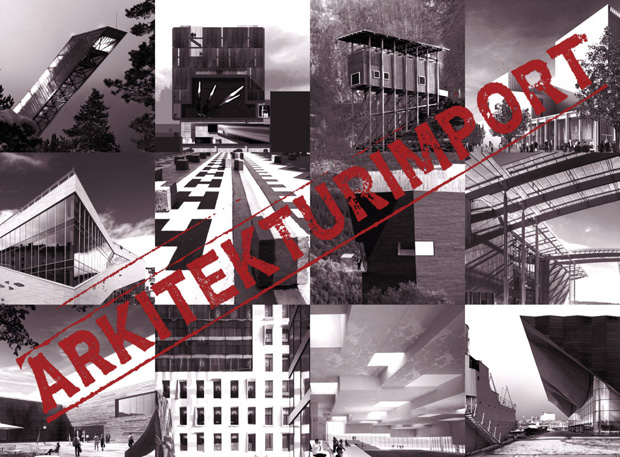 Here is the introduction by the curator of the exhibition, Eva Elisabeth Madshus:

An increasing number of foreign architects are winning competitions or receiving commissions in Norway. The exhibition takes up this relatively new and interesting development, which is primarily due to the introduction of the EU directive on competitions and more building activity in Norway than the rest of Europe.

This exhibition presents a selection of foreign architectural firms with projects in Norway. It also provides the basis for examining what this increasing internationalization means for Norwegian architecture’s identity and quality.

– Are foreign architects reinforcing the trend toward a type of globalization that is dissolving national and cultural differences? Or are they even more concerned with formulating a Nordic or Norwegian identity than their Norwegian counterparts?

– Is it possible for an architect to create exceptional architecture in Norway without firsthand experience of Norwegian society, building traditions, climate or the natural environment? Or on the contrary, do foreign architects bring new ideas and ways of thinking that enrich the quality of Norwegian architecture?

– Do the EU’s competition regulations, with their criteria for participation and ranking, ensure that the best architectural projects win? Or are foreign architects displacing their Norwegian counterparts in today’s highly competitive building market?

Debate about foreign influences on architecture is not entirely new. Craftsmen from the continent were involved in building Norwegian mediaeval churches, and after the dissolution of the union in 1814 the country’s new institutions were by and large designed by Danish and German architects. But since the beginning of the 1900s, once architecture was an established course of study at NTH (Norwegian Institute of Technology; today the Norwegian University of Science and Technology in Trondheim), Norwegian architects have been responsible for the vast majority of building works in the country. It was not until the EU competition regulations were adopted in 1994 that foreign architects began to make inroads in the Norwegian market, and the trend has been sustained by the country’s strong oil-driven economy and numerous public sector building projects. In 2012 the results of these factors are striking: a dozen public building projects designed by foreign architects are either in preparation, under construction, or completed.

The architects included in this exhibition are consummate professionals. Their projects reflect exceptional quality at every stage – planning, design, choice of materials, execution – and many of them will become important sources of inspiration. Norwegian architecture is well served by intensified international competition. Every good architect can acquire competence about the particular context that a building project is always a part of, regardless of national origin. Thus, increasing globalization need not lead to uniformity in architecture.