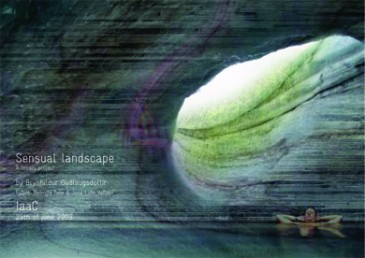 Today we present the work by Brynhildur Guðlaugs, an architect from Reikiavik, Iceland. Her proposal, called Sensual landscape, is a bathing facility for the hiking people who travel around the Torfajokull region in Iceland, an uninhabited area in the south and one of the most powerful thermal areas in the country, named after a glacier, Torfajokull. The structure of the facility is an adaptation of the already existing hot springs that are situated all around the area.

Brynhildur graduated with B.A. in summer 2006 from the Iceland Academy of the Arts, Reykjavik, Department of design and architecture. She just recently graduated from the Master in Advance Architecture at the Institute for Advanced Architecture of Catalonia in Barcelona, Spain.

Iceland is located on the Mid-Atlantic Ridge, which makes it one of the most volcanically active places in the world. It sits astride the boundary between the Eurasian and North American Plates and the most volcanic activity is concentrated along the plate boundaries that run across Iceland from the southwest to the northeast of the country. These plates are constantly moving, and in Iceland they move apart from each other and therefore create new earth crust by the convection of lava.
Because of this volcanic activity there are over 200 volcanoes located in Iceland and about 600 hot springs. There are also about 20 high-temperature steam fields that are at least 150 °C and many of them reach temperatures of 250 °C.

This is what allows Iceland to harness geothermal energy and these steam fields are used for everything from heating houses to swimming pools.
The Sensual landscape is bathing facility for the hiking people that travel around the Torfajokull region in Iceland. It is an uninhabited area in the south, containing a wide variety of terrain and some of the most beautiful in the Iceland. It is also one of the most powerful thermal region in the country, named after a glacier, Torfajokull which is a large rhyolitic volcano massif.
The structure or the facility will be an adaptation to the already existing hot springs that are situated all around the area.
The space will literally be structured on a current of fluid. By using the same technique as we use to pump the water into the houses in Iceland, about 200°c hot water is pumped into copper pipes that flow through the structure. The movement of the water then generates different temperatures in the space as it cools down while moving through the pipes. According to this, variation of temperature can be analyzed and then, places of different activities planed according to the distribution of the temperature.
Certain areas of the structure would be influenced by different degrees of temperature, color, light, material and etc.

The guests of the facility may move around this landscape of temperature and freely choose a climate and atmosphere according to their desire.