We are very pleased to announce that our Master Plan proposal for the revitalization of the Historic Downtown District of Asunción, Paraguay (Plan Maestro del Centro Histórico de Asunción), in an international open competition held in the past months. We are surprised and thrilled with the great reception that the project has had, and eager to continue its development side by side with the people, the organizations and the institutions in the city.

The proposal aims to address the integrated regeneration of the city center in an inclusive way and turn the process into a reference, in a time when many cities are looking into other ways to approach their future.

Designing a process of change

The city is a complex, always mutating organism made of many layers and links between them. Any action modifies the predefined conditions and can generate new processes which were not defined or even contemplated. Therefore we think that it is unwise, and even not entirely feasible, to analyze or design guidelines for many decades at a single time.

To bring this planning process closer to the ever changing reality of the city and its inhabitants, here at Ecosistema Urbano we propose the design of a “master process” which incorporates in its own functioning the tools to deal with complexity, conflicts and changes, and that will be supported by the diagnosys, plans, and projects already realized in the city during the last decades.

Just as cities like Medellìn, Porto Alegre, and Curitiba have become references, not only in Latin America but also worldwide, thanks to their commitment to innovative models of management and development, we believe that Asunción can become a world pioneer in promoting a sustainable, intelligent, and open urban development towards a direction that other cities are looking at.

Based on hundreds of real experiences

If the implementation of a process-based action plan is a novel approach for most cities in the world, it is also true that there are many examples and a wide background from which we can learn and through which we can confirm their enormous potential.

For this reason we have conducted an extensive research on institutional (top-down) and citizen (bottom-up) initiatives that, according to a different way of understanding the city, have already successfully led to a new concept of life quality for its inhabitants. In this research we have included international experiences as well as local initiatives that are currently being carried on in the city of Asunción. 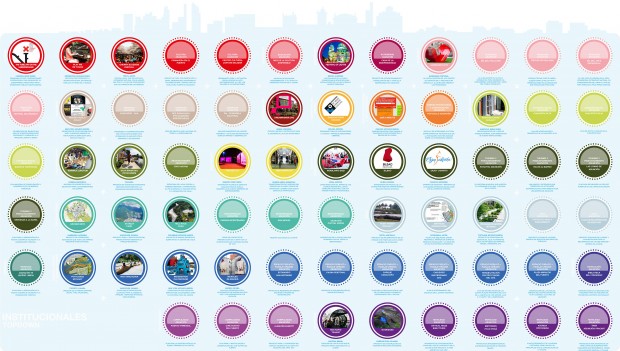 The global vision provides us with knowledge, experience, and an input channel of creative and innovative dynamics that can overcome some limitations of the local context. The local gives us a closer point of view, more related to the specific needs of the city and its inhabitants and connected with their initiatives and most genuine impulses. 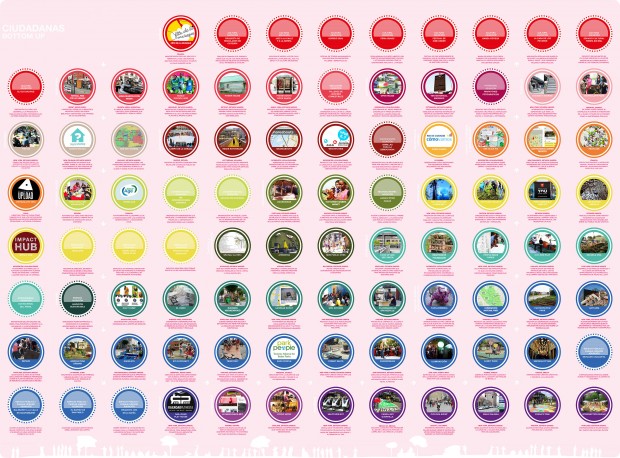 From a space to work with the city

A traditional Master Plan is a fixed, static, document, but the “Master Process” that Ecosistema Urbano is proposing for Asunción is something dynamic that needs a place to reside, activate itself and be developed. Therefore the first action will be to launch a space from which we can drive the project together with the city. 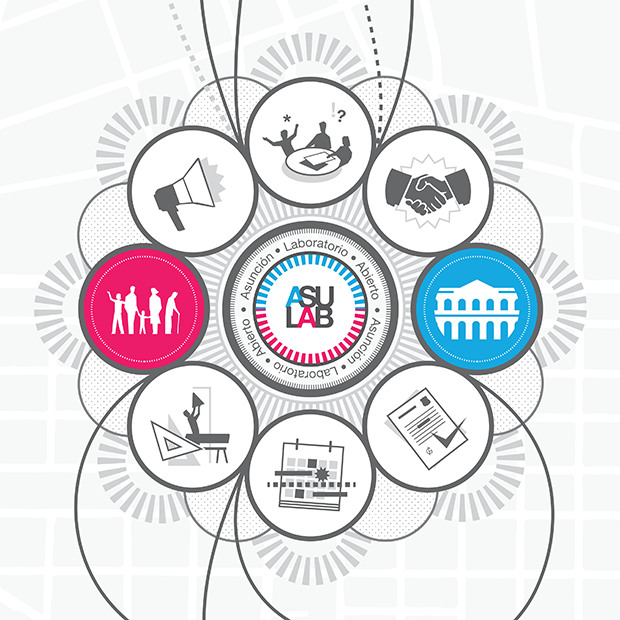 Diagram of the proposal, the ASU-LAB being the main conector between institutions and citiens, and the driver for the implementation of actions – click to see full size

The Asunción Open Lab (Asunción Laboratorio Abierto, ASU-LAB) space will function as a coordination node for the development of Asunción’s Historic Downtown district, providing information about it, hosting and programming educational and creative activities, and promoting citizen actions within the parameters defined by the 10 institutional actions described below. ASU-LAB will be the main and most visible node of the process, an “office for the change” where many activities essential for the success of the plan will take place:

Communication: Provide visibility, meet the key players and stakeholders, include them in the process and keep the city informed.
Mediation: Sit around the same table with different actors and stakeholders, resolve conflicts and join visions.
Connection: Link interests, create agreements between the parties, build networks and seek synergies towards urban regeneration.
Facilitation: Loosen bureaucratic constraints, ensuring that support, financing and government approvals reach the projects whenever needed.
Programming: Establish development times, schedule events, coordinate the efforts over time creating a common agenda for change.
Design: Co-design and launch low-budget and citizen-driven actions as quick experiments around the larger municipal projects.

“Think globally and act locally” says one of the mottos of sustainable development. But this approach could be enriched by another couple of concepts: institutional management and citizen impulse.

Respecting and incorporating the corresponding roles and capabilities, ASU-LAB will be an interface between citizens and institutions, a place where the Municipality implements its plans, but also an open place where any person or group can propose a new regeneration initiative or join an ongoing one. It will also serve as a node for connection with private agents capable of giving economic support, with their investment and the development of projects, to the regeneration of the center.

From the institutional side there is the opportunity to improve the city by developing large scale projects, equipping the city with new infrastructures, implementing the development plans and creating comprehensive urban policies to guide the city towards another future.
In order to provide a necessary infrastructure for downtown development, we propose a strategic plan with 10 actions that will help connecting the different areas, giving visibility to the process and ensuring the development of spaces with a distinct character that can act as vectors of change and as reference points in the city. 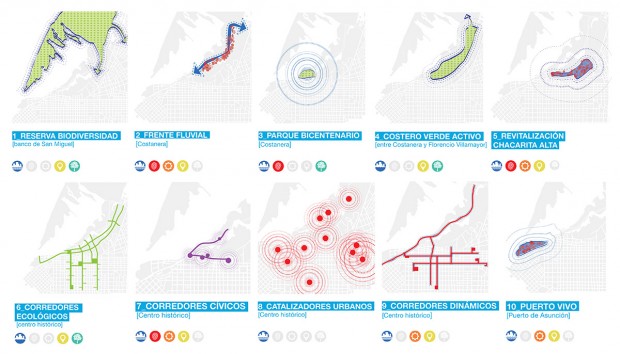 01. Asunción Biodiversity Reserve: Support the institutional initiatives to consolidate the San Miguel Bank as a Nature Reserve, this process is organized in different phases: environmental restoration, enhancement of biodiversity and creation of lightweight infrastructure for research, education, and responsible leisure activities.

02. Asunción Riverfront: Creation of an urban front that defines the edge and the facade of the city towards the bay, considering three different scales: the scale of the river, the scale of the infrastructures (the new waterfront road) and the human scale desirable for the future of Asunción. The designed density and the urban diversity considered in the proposal will encourage the spontaneous emergence of new kinds of creative economies.

03. Bicentenario Park: Integration and improvement of the existing project to increase its environmental qualities and the connections with the most representative buildings of the city and the country. Generation of a representative and open civic axis in the section of the waterfront facing the park.

04. Green Active Coast: Landscape and ecological regeneration of this area and creation of a large green lung in continuity with the Bicentenario park. The existing topography will be respected, the presence of water and the natural and artificial processes of water purification, as well as periods of flooding caused by the Paraguay river will be considered part of its identity. Active plans to support families living in informal housing in this area will be made, helping them become a part of the urban diversity of the new urban developments in the area.

05. Revitalization of the Chacarita Alta: Regeneration and participatory consolidation of this district using the experience and the know-how gained from the similar process in the San Jeronimo neighborhood, promoting microeconomics, education and neighborhood identity.

06. Ecological Corridors: Implementation of new longitudinal green infrastructures on sections of specific existing streets. They will connect the new riverfront through the large floodable park, attracting biodiversity towards the existing city center, embracing and reviving its most representative green spaces.

07. Civic Corridors: Civic corridors are a new network of public spaces in the streets, connecting the most prominent historic and governmental buildings. They will be created through interventions on these streets’ section, giving them a more institutional and cultural character. Signaling, beautification of the facades, street art, …

08. Urban Catalysts: New hybrid buildings that will be designed considering a high density and variety of uses and housing programs. They are tall buildings that take advantage of vacant lots or areas with degraded buildings that require a reactivation process. In the lower floors they will host commercial areas and equipments, functions capable of “making” the city. Their general function is to enable flexible scenarios and enhance urban diversity.

09. Dynamic Corridors: A network of public spaces mainly oriented at the creation of active urban settings and the generation of economic and cultural activity. They encompass current trade areas (Calle de la Palma, …), characterize other nearby streets, revitalize disused buildings and connect the new network of hybrid buildings or “catalysts”.

10. Live Harbour: Following the plan already started by the “PIA Cultural Citadel”, the port of Asunción will be reconfigured as a new cultural engine for the city, nurturing social interactions and economical activities. Representative buildings, such as the Customs and other adjacent construction, are integrated in the proposed civic and dynamic corridors. 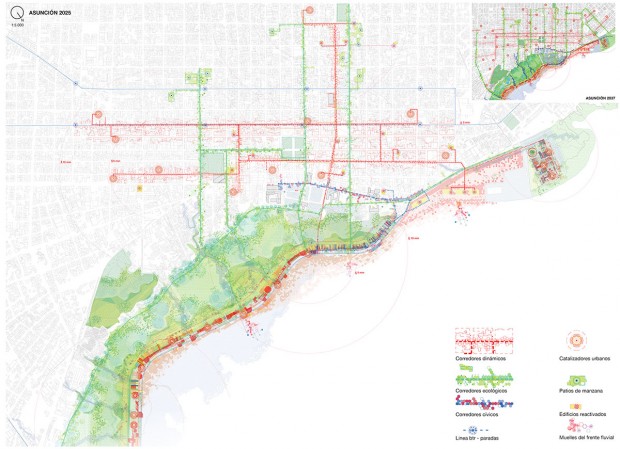 Citizens are the very heart of the city, the only force capable of realizing any deep, long lasting change in the urban environment. In the proposal we select many local, bottom-up initiatives, undertaken with the spirit of urban involvement, participation, entrepreneurship, creative activism and care of public space by the very people who live it.

We propose to integrate the existing initiatives in the process, giving them relevance and institutional support, while at the same time incorporating lessons learned from around the world. In a process of urban-scale prototyping, we propose to start a series of temporary urban actions focused on issues such as security, urban image, comfort, environment, social interaction or the innovative economic development, keeping only the best solutions found during the process.

Some more images of the proposal: 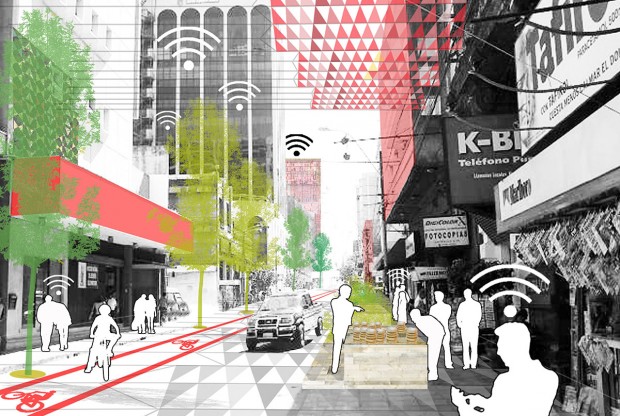 Dynamic corridor, open to the traffic.

We like to think of this project for the future of Asunción as a ñandutí: a symbol of knowledge and of local tradition, of diversity and color, of networking, of the encounter between tradition and creativity. A place where the city can intertwine visions and efforts to create an urban fabric more vivid than ever.