Datea: we are all “dateros” l Social Toolbox 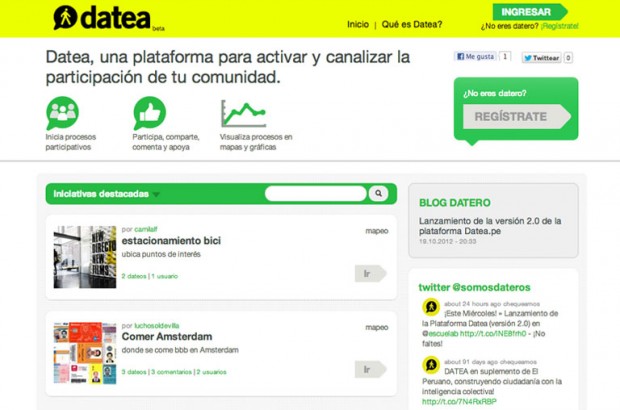 Screenshot of the homepage, datea.pe

Datea, previously known as Todos somos dateros, is a public digital platform, which fosters citizens’ participation in the definition of problems and proposals for the improvement of Lima’s living conditions.

It is an independent project, developed by and from the civil society, and one of the first and more singular ones of its kind. It was born in 2010 thanks to a citizens’ initiative, and it was developed by the social enterprise La Factura in collaboration with Ciudad Nuestra.

The Datea project responds to the context of transformation that the city of Lima is living. Like many other capital cities Lima is facing urban transportation problems due to an excessive use of cars and unsustainable activities of informal transportation businesses, with consequent congestion and pollution. The platform applies relatively recent information technologies which, combined with campaigns in public spaces, create an innovative channel for participation.

The beginnings of the platform were very related to urban mobility. A measure taken by the city of Lima is the construction of the Metropolitano, a Bus Rapid Transit system. The Todos Somos Dateros project considered it as an important means for redefining spatial mobility in Lima in a more sustainable perspective, and aimed to give users the opportunity to participate for the improvement of the system.

Another plan of the city of Lima is the construction of 200 Km of bike lanes from 2012 to 2014. Meanwhile many users of the platform Todos Somos Dateros Ciclistas wanted to improve the conditions of the already existing bike lanes and to promote a proper behavior and mentality of drivers, cyclists and pedestrians for considering biking a legitimate and important means of transportation.

As the time passed, the platform begun to outgrow those two scopes and to adress wider issues, with the general goal of collectively improving quality of life in urban context.

Datea doesn’t depend on any particular interest and doesn’t relate to any political party or public organizations/institutions. Citizens’ direct participation is considered as a key factor for the development of urban mobility and of the city in general. The objective of this project is to create the conditions and opportunity for citizens and to all sorts of actors (communities, municipalities, civil society and enterprises) to actively participate and contribute to the process of cultural transformation of Lima, to encourage the building of online communities of active citizens, to offer information and experts’ reflections on urban mobility, public space and other topics.

How does Datea work?

The platform was initially divided into two sub-platforms. One of them addressed problems of the Metropolitano system, where citizens could inform about conditions of signs, of security, infrastructure, accessibility and behavior.  The other platform addressed problems of mobility on bicycles and conditions of bike lanes. It provided the digital space for informing about conditions of signs, infrastructure, security and accessibility, about behavior of users and dynamics of bike mobility.

Vastly improved in the last version (2.0), now a unified platform allows the creation of different maps and initiatives, and includes an administration panel enabling enterprises, organizations and governments to channel the social engagement in the platform,  and to directly answer citizens’ entries or post themselves new informations. This was intented to improve the transparency of municipal administration and encourage a closer relationship between citizens and local government. 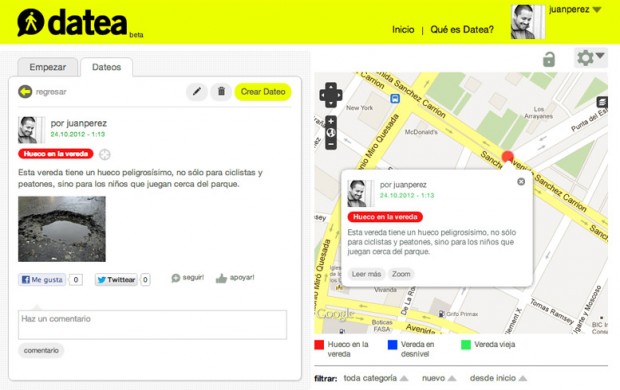 User view of a “dateo”

The website is based upon a system of posts or entries called “dateos”. After you have signed in, you can post a problem or a proposal, add the location and give a proposal for its solution. The “dateo” can also be shared in the participant’s social networks, or followed by others inside the same platform. The posts can bear the participant’s name or be anonymous, according to the user’s preference.

Once this information has been posted, it will be sent to the concerning authority, and the proposals for the solution of the problems will be revised by experts.

The use of platform is free for everyone, and the code was recently released as open source under the GPL (General Public License). It also has an Android application that makes it even easier to add “dateos” on the go as you use and move by the city. 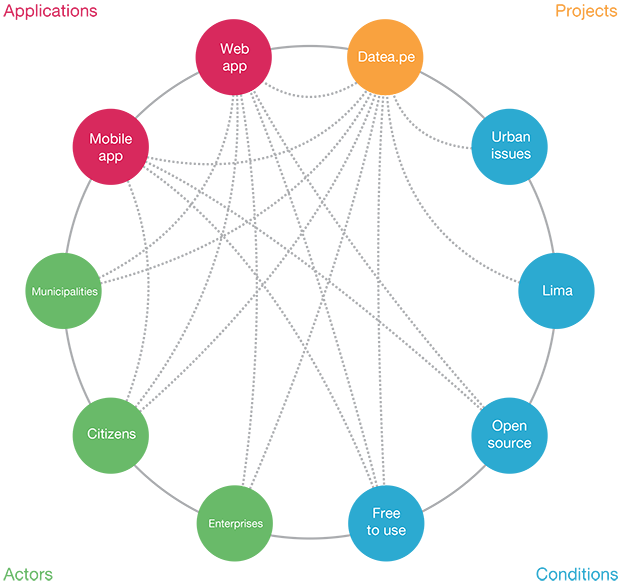 The original name was more like a tagline claiming that “we are all dateros”, summarizing the spirit of the platform. A “datero” is a person that assists the public transport system by gathering information about its functioning (for example the distante between buses along the same line, measured in time) and delivering it to the drivers. We like how the platform took that concept and extended it to everyone in the city. “You can gather urban data, too”.  This helps creating a culture of involvement based on crowdsourcing lead by active citizens.

The fact that the platform involves all stakeholders in one place is great. As it happens with other platforms like SeeClickFix or FixMyStreet, this ensures that the participatory contributions are taken seriously and delivered to experts and decision makers in the city. Otherwise the participatory impulses could have a dead end, and that is the less ’empowering’ feeling a citizen can have.

As for what could be improved, we are sure that a regular user could point out bugs and possible improvements, but for us, with less hands-on experience, this is one of the best platforms of its kind. It has many features, both externally visible and user-oriented ones like following, editing, saving, creating maps, etc. while keeping things reasonably simple. It even has a mobile app. It’s open source and actively maintained and developed. What else could we ask for?

You can view a great summary about “Todos somos dateros”, in Spanish, in this post by Domenico di Siena.