We present a team from Johannesburg: THE GREAT CASCOLAND..

In the summer of 2004 Cascoland was initiated at the Oerol-festival on the island of Terschelling, the Netherlands. Bringing together a group of five artists all researching Do It Yourself (DIY ) architecture from different backgrounds.

A Cascoland village was erected in three weeks prior to the festival and kept developing during the festival through audience-participation. Centre of this intervention were five architectural structures built by the artists that could house visitors to the festival. Cascoland was open all day to be visited, workshops were given, and at night it turned into a vibrant little village. People could eat and drink and enjoy music and theatre and actually take an outdoor bath in a five-story bath-tower. In the midst of a theatre-festival, which Oerol is, Cascoland did a project involving architecture, sculpture, and theatre and had people actually stay for bed & breakfast in the constructed objects.

Through an exchange of ideas with South African theatre maker Mark ‘Odd Enjinear’ O’Donovan, who at that time was working on a show on the topic of housing, the plan emerged to take Cascoland to South Africa.
Cascoland eNewXds2006 in New Crossroads, Cape Town, started with the idea of building a ‘mobile village’ in a public space through an exchange of skills and experience with a set of linked activities. The security and management challenges to this intention mutated several of these goals. So instead, the focus shifted towards turning public space into an accessible and liveable one. This was achieved through a collage of different projects. Cascoland eNewXds2006 resulted in a series of constructed objects like a restaurant, an inflatable bed & breakfast-installation, a radiostudio and a swimming pool, recycle workshops, animation workshops with schoolchildren, hip hop jams, a line football tournament, a documentary film festival that interacted with more traditional performances, and visitors were even able to book a night in an inflatable bed & breakfast. The approach remained Do It Yourself and pragmatic. This proved to be inspirational to the residents. They were able to follow the development of every individual project step by step. By applying locally available materials, using familiar and transparent techniques and, most of all, by leading in the manual labour, a close collaboration was established. The effect was the same.
‘An explosion of public cultural life. A reported reductio in street-crime, visitors of all kinds walking through a community otherwise usually isolated. Cascoland achieved significant goals’ (Public Eye, March 06)

The Joubert Park Project invited Cascoland to execute a second SA edition, Cascoland Joburg 2007 at the Drill Hall, Johannesburg between 1 February and 18 March 2007. The development from object-oriented interventions towards more audienceparticipation and -mobilization has continued into this project. 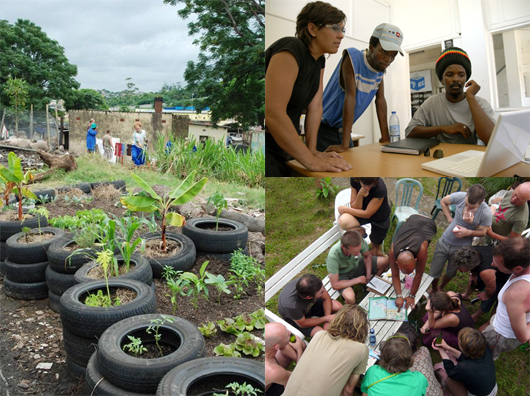