call for papers: Hibrydation and cross-culturality in contemporary habitation 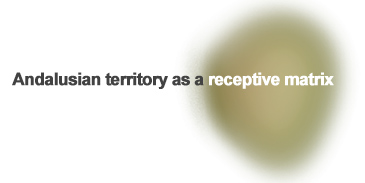 Through the public bid won by means of the project presented to the aids to the investigation regarding architecture in the year 2007, from the old Ministry of Public Works and Transportation and today dependent on the Ministry of Housing and Planning of the Territory of Junta of Andalusia, a line of investigation is defined regarding the manners of coexistence and habitation in the Andalusian territory in the near future, within 20 and 40 years, that shape evolutions and generate possibilities according to variables that today, each day, we can perceive as determinants of cultural transformation.

A cultural framework surrounds the investigation. From this dimension it is intended to make an integral path that draws an edge, a silhouette that permits the diagnosis of the adaption, absorption, integration, and hybridization capacities of the multiple situations that are produced with respect to the manner to inhabit the territory of the study.

The teams of the Project investigators have generated two perspectives of analysis: from the architectural to the cultural, and from the anthropological to the spatial. They are two ways of thinking that have to face each other and build a common protocol of understanding the problem. In spite of the plurality of the theoretical-methodological party, the intention is that the disciplinary studies break up into a common and global analytical line –which is a significant consideration- that will be implemented by a joining process that will be registered. The advances of the investigation will be periodically revised, reflected upon and confronted in an internal manner with other specialists from the two previous seminars.

The seminars, besides favoring a interdisciplinary meeting and debate, have as a priority objective to incorporate new participants into completed investigations or in a course that enriches those that are considered for the Project Coordination. For them, almost consecutively, in two central locations in Andalusia, will be held seminars open to the participation of as many groups, institutions, investigators, legislators and associations of any kind, etc., who want to share their experiences. From the Project Coordination, we think that a collective, multidisciplinary, and participative knowledge can have a successful effect on the exploratory and generative vision as well as a greater productive capacity. Typically, the investigations work to prove the phenomenon, although from our ethical motives, it interests us to emphasize those dimensions that have visibly improved the social relations and those of coexistence, understood from the values such as mutual respect, openness, and receptiveness… Andalusia, as a region, historically is categorized by its exchange, mixture and diversity, brings together the optimal conditions to develop a debate about how to adapt to the new additions that will surely come to pass.

The social reality of Andalusia has suffered from an intense transformation in the recent decades that has reverted the modes of living, from its uses and perceptions to its concepts and planning. The enormous changes produced in the basic productive structure with its consequential correlations in the levels and habits of living throughout the different Andalusian sectors: the massive process of migration with the visible incorporation of new collective cultures with diverse world views; the tourism in its multiple and diverse variants; the destinies of professionals and the studies of new Andalusian generations, among many others, are variables that cross and mix personal and group mentalities, conforming a new and complete scenario that requires a detailed analysis with the intention to generate ideas and propositions that are able to converge in a harmonious way in future living designs in the new social contexts.

One can observe that there is a participatory area with two spheres of influence: the seminars and the “Collector”. The seminars are described next. As for the Collector, the name that is given in the web module hibridactionesandalucia.net, is an open data base, where one can request and access documentary files, as a registration of the building contributions, social contributions, with or without the project, that serves to maintain an observation of trans-cultural actions. This observation will have a widespread effect over time, beyond the finalization of the investigation.

This registry will have as the only filter that which belongs to the thematic lines expressed previously and that the documentation is complete and can be downloaded as model files from the web.

It will have various purposes. The first one has already been expressed, to spread those proposals that indicate how they have proposed and resolved problems of cultural change through renewal or through imposition. The second one will be to present this registry to the financial institution of investigation, the Junta of Andalusia, so that they can obtain their own sources and conclusions. This material will be an object of study for part of this investigation and will always remain under protected authorship. In the root of this study, one can be invited to participate in parts of the investigation, by means of a partial assignment, as in the seminars.

Published in the Official Bulletin of the Junta of Andalusia, number 94,13/05/2008:  www.juntadeandalucia.es

Submission and Relevant Information
Abstract submission must be in Spanish, English, Portuguese and French with about 500 words. Full paper submission could be either in English or Spanish.  Abstract and full paper submissions should be sent in MS Word document format. See website for conditions. Abstracts and full papers should be e-mailed to scientific committee chairs to: info@hidridacionesandalucia.net
For further information about submissions, please contact scientific committee chairs o visit: www.hibridacionesandalucia.net