In the context of the extensive process to develop the Innovative and Creative Urban Strategic Plan (Plan Estratégico de Innovación y Creatividad Urbana), Cacéres City Council is calling INTA to help make its project a national and international reference.

The panel is intervening between the participatory and the design phases. INTA will involve its membership network in this challenging participatory process leading to an Innovative and Creative Urban Strategic Plan. INTA will expand on the proposals already made by several local working groups and comments received from external observers, providing a wider international input to the process.

Ecosistema Urbano, represented by Belinda Tato, will take part in this event. 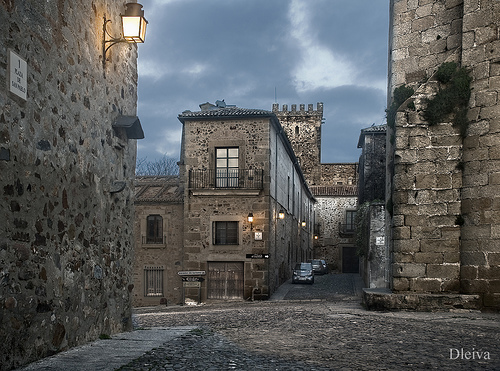 Cáceres, the most intact medieval quarter of any Spanish city, has been growing on the west part of its territory turning his back to the walls of the City. The recent archaeological interpretation of the fortress, the rediscovery of the old well, and the reactivation of the Silver Trail create an opportunity to revitalize the land on either sides of the creek “Ribera de Marco” finding inspiration in history and in the City identity.

Today this area is devalued, peripheral to the main axis of urban development even if there is still traditional activity such as local gardening and huertas. The stream Ribera de Marco could be a link between the North and the South of the City -University site on one end and future innovation park close to the old mining town on the other end, linking past to future, tradition to innovation, culture to nature- giving territorial coherence and enhancing the potential of renewal and regeneration.

The City Council of Cáceres already received proposals for strategic intervention for the Ribera del Marco.

INTA panel will focus on the overall coherence of the project, its viability, the applicability and its implementation rather than on the elaboration of a vision, which exits, or on the detailed proposals themselves. Moreover, the Panel will address a higher level of the strategic vision -the impact of the Ribera del Marco, as the backbone of future development, on the whole City of Cáceres.

This approach might as well help the candidacy of Caceres as European Capital of Culture.

The involvement of an INTA panel should be considered as an opportunity for the City to:

* validate the Ribera de Marco proposals through an international benchmark;
* identify the priority elements to implement;
* work on the economic, institutional and cultural implementation;
* work on institutional management and governance of the project at different scales. The innovative participatory process is already quite advanced and it seems appropriate to follow it up and to focus more on the institutional participation (at different scales and degrees of commitment of the public actors and within the municipal system) to protect the vision and make secure the strategy and the project;
* finally, the recourse to an international panel might help to communicate and explain the public action to the local environment (institutional actors and civil society).