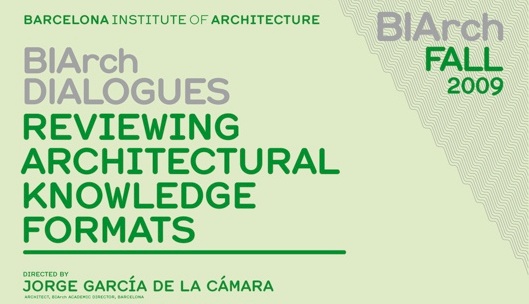 The Barcelona Institute of Architecture present its forthcoming BIArch Dialogues “Reviewing Architectural Knowledge Formats” to which I am invited.

As the title suggests, the dialogues will focus on issues regarding the generation and dissemination of architectural knowledge and content, through print and digital media, institutions and curatorial practices, and the establishment of pedagogical agendas. This way, BIArch hopes to open a field of inquiry that complements the Institute’s fundamental theoretical, technical and academic concerns. Through the shared reflection of scholars, critics, independent publishers, digital media entrepreneurs, curators, and cultural activists, the dialogues hope to establish a framework that might provide some of the answers to a context in which knowledge is permanently evolving.

Pier Vittorio Aureli is an architect and educator. After graduating cum laude from the Istituto di Architettura di Venezia, Aureli obtained a Master’s degree at the Berlage Institute, and a PhD at the Berlage Institute and the Delft University of Technology. Aureli teaches at the Berlage Institute and is also responsible for the “Research On the City” program as well as the “City as a Project” PhD Program. He has been visiting Professor at the Architectural Association in London, Columbia University in New York, and TU Delft. Together with Martino Tattara, Aureli is co-founder of Dogma, an architectural collective centered on the project of the city.

Mario Ballesteros is an editor based in Barcelona and Mexico City. He manages digital platforms and content for the Barcelona Institute of Architecture and is a regular collaborator at Actar Publishers. He holds a BA in International Affairs from El Colegio de México and a Master’s degree in Architecture and Urban Culture from the Universitat Politècnica de Catalunya. He has conducted research with LAR/Fernando Romero and Grupo de Diseño Urbano, and recently worked as a curator for the Disseny Hub Barcelona.

Felipe de Ferrari received his architecture diploma from the Universidad Católica de Chile, and is Editor in Chief and co-founder of 0300TV. Launched in 2008, 0300TV is an online architecture channel and media platform presenting original features and research content; an audiovisual catalog of buildings, interviews, and events coverage. De Ferrari is part of the faculty at the Andrés Bello University in Santiago, and has contributed content for magazines like Urban China and ARQ, as well as for the Wohnmodelle – Housing Models: Experimentation and Everyday Life exhibition hosted by the Künstlerhaus (K/Haus) in Vienna and the Sofia Art Gallery in Bulgaria.

Pedro Gadanho is an architect, curator and writer based in Lisbon. He is Editor in Chief of Beyond, Short Stories on the Post-Contemporary – a bookazine launched in 2009 and published by Sun Architecture in the Netherlands. He teaches at the Oporto Faculty of Architecture, and from 2000 to 2003 was co-director of ExperimentaDesign, the Lisbon design culture biennale. He has been curator of numerous international exhibitions, including Space Invaders, for the British Council, London, and Pancho Guedes, An Alternative Modernist, for the Swiss Architecture Museum, Basel.

Francisco González de Canales studied architecture at ETSA Seville, ETSA Barcelona and Harvard University. He is currently coordinator of the Architectural Association’s Curatorial Practices/Cultural Products (AACP) and worked for Foster + Partners and Rafael Moneo before establishing Canales & Lombardero.  An active architectural critic, he has previously lectured in England, Mexico, Spain and the USA, collaborated and worked on different architectural publications. He has recently completed his PhD on the radical domestic self-experimentations of the 1940s and 1950s.

Joseph Grima is a New York-based architect and researcher. After graduating from the Architectural Association in London, he worked as an editor and adviser at Domus magazine and is currently Director of the Storefront for Art and Architecture, a nonprofit exhibition and events space in New York City committed to the advancement of innovative positions in architecture, art and design. He is a PhD candidate at the Centre for Research Architecture at Goldsmiths College in London, and a regular contributor to a wide range of international publications.

Alicia Guerrero Yeste is an art historian and architecture critic, founding partner of ¿btbW/Architecture –a platform for critical research in contemporary architecture– along with Fredy Massad. She contributes regularly to newspapers such as ABC and La Vanguardia. Alicia is also co-author of Notas sobre ciudades (mutantes) (1998) and Enric Miralles: Metamorfosi del Paesaggio (2004), as well as co-editor of a+a architecturanimation (2002) and the monograph issue Arquitectura en la era de la revolución digital (2003).

Inês Moreira is an architect, researcher and curator based in Porto. She received her Dip. Architecture from FAUP Porto 2001, a Master in Theory of Architecture and Urban Culture from the UPC Barcelona in 2003 and is currently a PhD candidate in Curatorial/Knowledge at Goldsmiths College, University of London. She has been coordinator of the Laboratório de Arte Experimental of Instituto das Artes/Ministério da Cultura in Lisbon, co-founder of Plano 21 Associação Cultural, resident curator at the Museo Extremeño Iberoamericano de Arte Contemporâneo de Badajoz, Spain and a researcher/teacher at the University of Porto since 2006. In 2007, Inês founded petit CABANON, a platform for curatorial research on space and culture.

Paul Petrunia is founder/publisher of Archinect.com (1997) & Bustler.net (2006), as well as president and creative director at Extra Medium, Inc., an LA-based web design/development studio. He studied arts and sciences at the University of Victoria, British Columbia, and later continued on to study architecture at the University of Oregon and the Southern California Institute of Architecture (SCI-Arc), focusing on practical approaches to environmental design, experimental architecture and digital media. Paul has been a guest lecturer at SCI-Arc and Woodbury University.

Joana da Rocha Sá Lima is an architect, editor and partner in Conditionsmagazine. She studied in Portugal, Italy and Germany and received her diploma in 2004. She has collaborated with Sauerbruch Hutton architects in Berlin, NL architects in Amsterdam, OMA/Rem Koolhaas in Rotterdam and A-lab architects in Oslo. She has been a guest critic for several universities including Oslo, LA and Porto. In 2008 she became founding partner of Conditions, a Scandinavian architecture/ urbanism magazine.

Enrique Walker is an architect and critic. He teaches advanced architecture studios and theory seminars at the Columbia Graduate School of Architecture in New York. Enrique studied architecture at the University of Chile, and was awarded a master of arts degree by the Architectural Association in 1995. He also completed his PhD at the AA. His published work includes 12 Interviews (Santiago: Ediciones ARQ, 1998), and Tschumi on Architecture: Conversations with Enrique Walker(New York: The Monacelli Press, 2006).

For further information on the BIArch Dialogues, please visit the BIArch website or download the detailed program of the event here.