A starting point: Banco de Ideas as an activator of the Hermosillo center

In a previous post, we shared the general approach for the Revitalization Plan of the historical center of Hermosillo. Pointing out how a strategic-tactical approach can contribute to transforming the city.

As we are focusing this month on hybrid buildings and urban catalysts, we want to take a closer look into one of the key sub-projects of the Plan Idea Hermosillo: the Banco de Ideas (Bank of Ideas).

Identifying an opportunity for activation

During the mapping process of the historical center, both in the on-site surveys and in the participatory meetings and workshops, one of the locations began to stand out as a key spot in the project’s approach: the Banco de Ropa (bank of clothes), a two-storey building used by a local NGO as a collection, storage and re-distribution point for second-hand clothes. 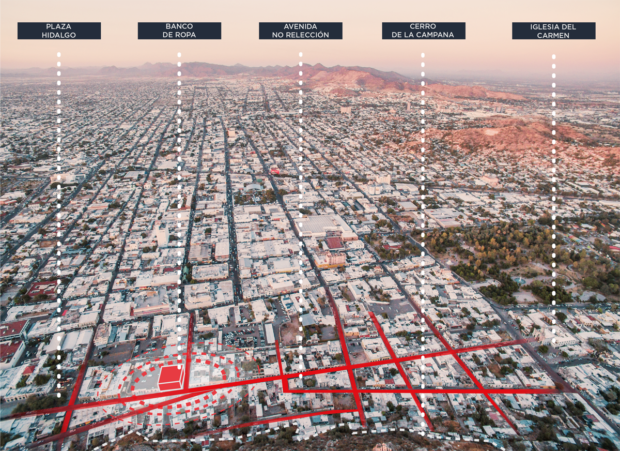 General view of the location of the Banco de Ideas and its surroundings, as seen from Cerro de la Campana.

View of the Banco de Ropa from the No Reelección Avenue, and current façade seen from Avda. Obregón.

Many of the ingredients needed to launch an urban activation project are present on the Banco de Ropa:

All these factors give this location a great potential for transformation and positive impact on the environment. They enable the ability to activate spaces, attract people and become the first step towards the revitalization of the historical center.

This is why this location was chosen as the main intervention of the Plan Idea Hermosillo, being developed as the “Banco de Ideas” Pilot Project.

The Banco de Ideas as an urban catalyst

The name and identity of the Banco de Ideas establish a link between its current use as a clothing bank and future use as a cultural, social and economic incubator. It is a space of exploration, a place capable of kick-starting the social, cultural and economic activation of the area. Capable of functioning as a collaborative “kitchen” in which the city and the neighborhood can experience new activities and ways of organizing themselves, and launch initiatives that improve the quality of life.

This is the role of an urban catalyst: to be one of the first steps on the long process of revitalization of an area of the city. The aim is to create a public and open place that would become a new node of activity, achieving a high impact without consuming excessive economic resources.

One of the first considerations when conceiving a new urban space like this one is the incorporation of new uses and programmes that will guarantee its transformation into an attractor of activity.

Many of the proposals emerged during the participation process with different stakeholders. The activities also served to identify the people or groups that could be involved in the subsequent management of the space. The uses and programmes that were identified as relevant for the reconversion of the building included gastronomy, culture, and heritage, entrepreneurship, education, new technologies and sport. 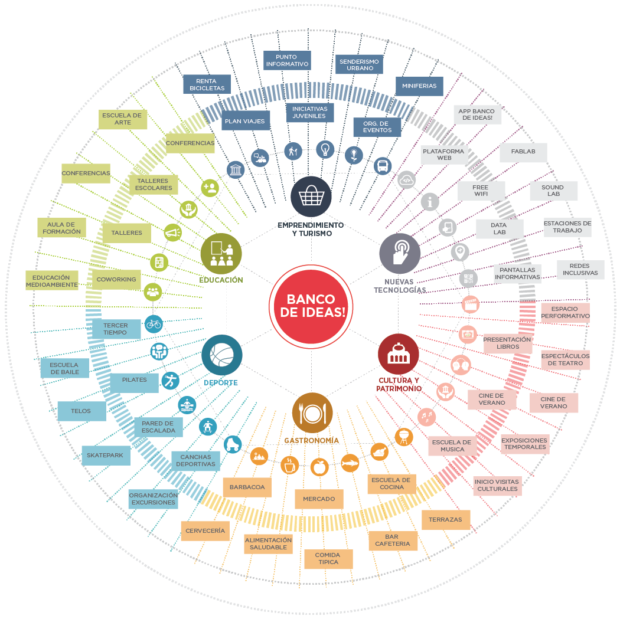 Key themes and activities identified around the Banco de Ideas.

Maximize the relationship with the environment

The Banco de Ideas building is a visual reference for the entire area because of its solid volume and height. It can clearly be seen from the Cerro de la Campana. However, given the importance of its integration into the urban context, the intervention cannot be restricted to an isolated architectural project: it needs to engage with the surrounding environment.

In the adjacent outdoor spaces (the small square on Obregón Avenue and streets) interventions are proposed in order to improve usability, comfort, attractiveness and general quality of the space. 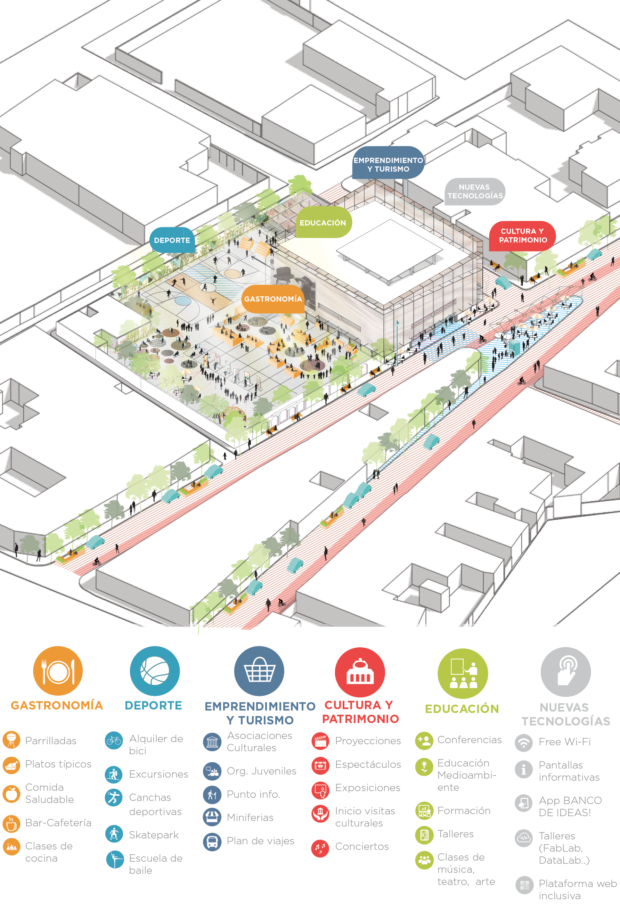 The Banco de Ideas and its surroundings as hubs for new uses.

The location of the building (right next to a public parking lot surrounded by a historic façade) allows for the creation of a unique combination of interior and exterior spaces. The parking lot is incorporated as a temporary expansion space in the moments of low usage, making it possible for the Banco de Ideas to also program outdoor activities.

The four large opposite entrances facilitate themovement of people, furniture and large objects, and provide physical and visual connection through the building.

The concept of an urban catalyst is translated as a hybrid building (see more examples), capable of hosting a wide variety of uses. This building typology lies halfway between the closed and the open, the public and the private, the physical and the digital.

Axonometries showing elements to be demolished (red) and to be added (green) to the Banco de Ideas.

The project is based on the existing building, modifying it according to six key principles: the creation of multifunctional spaces, the connection of interior spaces with surrounding public spaces, the improvement of its climatic comfort by bioclimatic design, the integration of new facilities and technologies to prepare it for innovative uses, the creation of an open and inclusive management system, and the extension of opening hours to create an almost 24/7 facility. 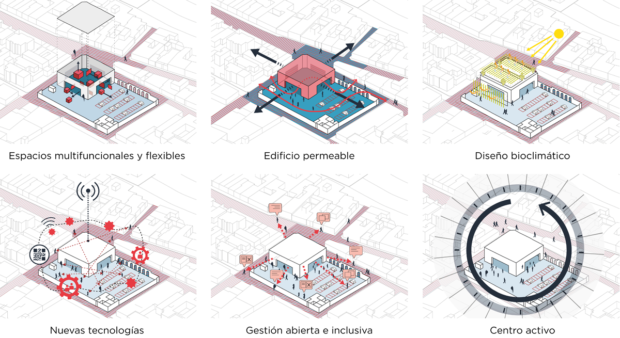 Explanatory diagrams of the main concepts behind the proposal for the Banco de Ideas.

Inside the building, the intervention focuses on improvements that will allow new programmes and increase comfort: more natural lighting and ventilation, an adaptation of the space to new needs, improved accessibility, modernization of basic infrastructures, improvements in the perception of the space, etc. 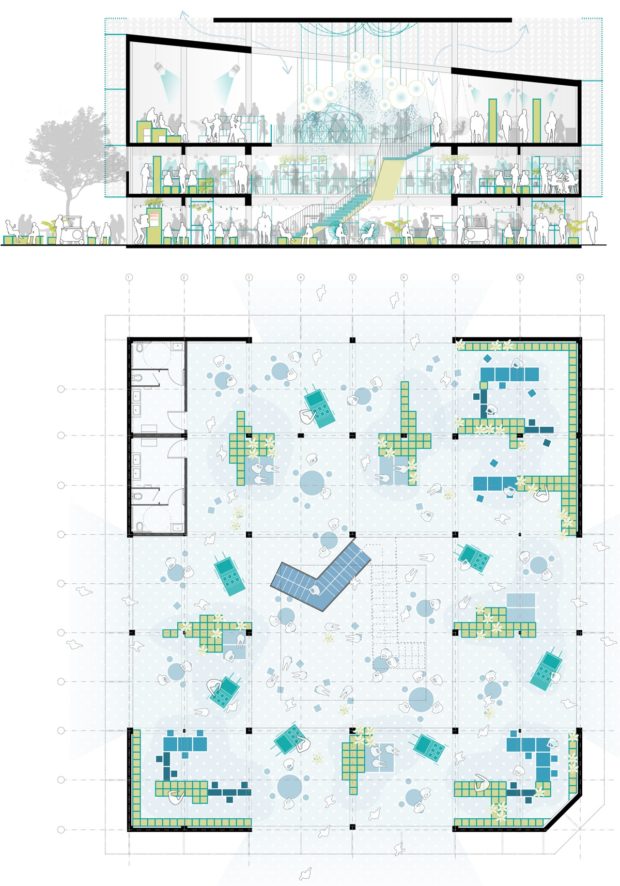 Plant and section of the proposal.

A key action for the renovation of the building is the addition o a new façace, made with light structures and semi-opaque textiles over the existing façace. Its design allows, on one hand, to protect the structure and the main enclosure of the building from direct solar radiation, improving its climatic behavior. On the other hand, brings a renovated image to the building while maintaining part of its previous shape.

Image of the building and the surrounding spaces from the outside.

The key to a sustainable management

One of the main challenges is related to the reactivation and management model of the Banco de Ropa building. Improving its physical appearance or incorporating new programmes is not enough. The real challenge is to develop an ad-hoc management model that guarantees its economic feasibility and at the same time promotes its use as a public facility.

This is why it is necessary to have the support of different urban stakeholders (private entrepreneurs, civic associations, local institutions, foundations, NGO’s, volunteers, etc.) organized in an administrative and consultive committee, and a civic board that will operate the Banco de Ideas in its day to day functioning.

The public sector will provide the building on a concession basis and will provide resources for the initial materialization of the physical infrastructure. At the same time, it will facilitate its management and operation with the other public agencies involved. 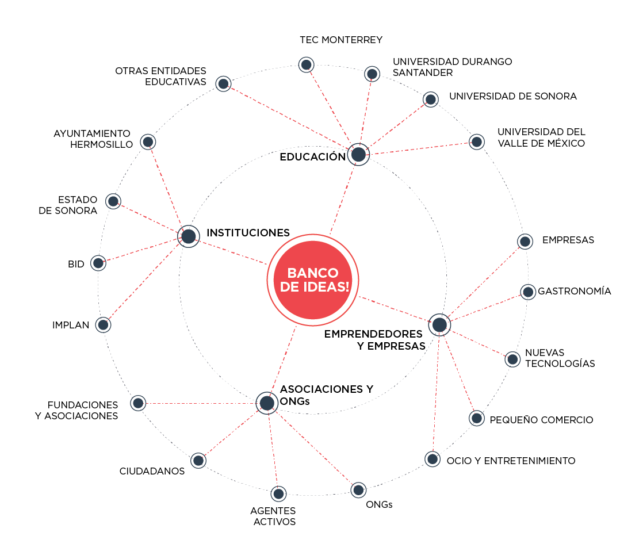 Profiles identified for the co-management of the Banco de Ideas.

The aim is making the Banco de Ideas a self-sufficient project that generates its own economy and activity.

If you want to know more about this project, we recommend you to check the Plan Idea Hermosillo, and the document with the proposal for the Banco de Ideas, which you can read below: